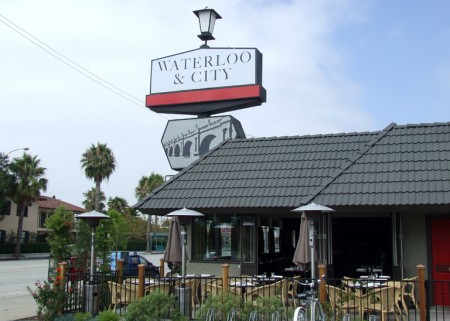 Waterloo and City in Culver City

Having missed my annual pilgrimage to the UK for the past couple of years, I eagerly accepted an invitation to partake in Waterloo and City’s family-style British lunch. Just going by name alone, I imagined it to be a pub with an Underground theme (not like an air raid shelter, like a London subway station). I was surprised to find the restaurant resembling a refurbished Denny’s from the outside, but once inside it most definitely took on the air of an older European establishment that had been mostly modernized. Our group of “foodies” sat at a single large table where we were introduced to chef and co-owner Brendan Collins whose British pedigree reflects a career stretching back to his teen years in the UK. Chef Collins and managing partner Carolos Tomazos bring the relatively recent gastropub concept to Culver City with a nod to traditional British and continental European cuisine. Collins is a subscriber of the “nose-to-tail” philosophy, but instead of focusing on using every part of the pig, he stuffs, roasts, terrines, and creates pâtés from a menagerie of furry creatures. 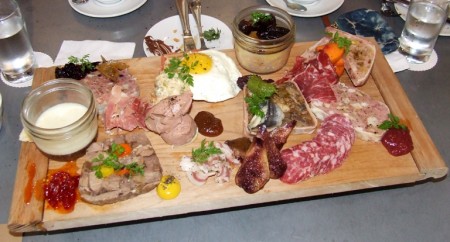 A platter fit for a king

There are small, classic British touches in the look and feel of the restaurant – the kitchen crew wear pin-striped aprons and bowler hats, even though they work mostly behind the scenes; a game room features a pool table, a dart board and a table-top Pac Man video game with warm and friendly couches and a fireplace, and one corner of the restaurant features traditional Wedgwood-looking wallpaper with a hidden, tongue-in-cheek surprise. Disney’s Epcot Center is famous for dressing up facades to look like European bistros and pubs, but the food gives the illusion away – the opposite is the case here. You can forgive the lack of green glass lamps, subway signs, and wood and glass bar panels when you look at the blackboard menu (which on this day featured a full English breakfast, fish and chips, roast dinner and shepherd’s pie). One item that immediately caught my eye was the blood cake, which I imagined to be a pseudonym for black pudding. I ordered the roast dinner, remembering the delicious home-cooked taste of the last one I had in a Liverpool pub, and (like the rest of our group) let Chef Collins surprise us. 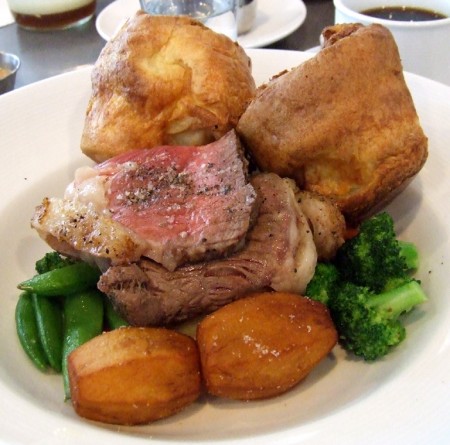 We started out with a breadboard with baked goods made on the premises including croissants, breads, scones and cookies. I somewhat jokingly asked where the Marmite was, which prompted our waiter to present a small tub of the salty goo at our table. Since it would have been rude to request it and then not eat it, I begrudgingly slathered the tar on a piece of raisin bread (which I think made the Marmite slightly more palatable). Surprise is a mild word for what came next – breathtaking would be more appropriate. A large plank was brought to the table bearing a collection of the finest representation of charcuterie I’ve ever seen. Terrines of bacon-wrapped trotters, rabbit with pistachio, venison and huckleberry, delicately prepared pates using the freshest and most exquisite combinations of offal and meats decorated the tray in what can only be described as food art (although food porn may be a more appropriate term). Chef Collins called the presentation “The King”, although these dishes took lowly peasant cuts and elevated them to royalty status. I was pleased that although we didn’t order it, the blood cake was brought to the table, and I have to admit it bore very little resemblance to black pudding. Where black pudding typically uses oats, barley or some type of grain for texture, the blood cake was mixed with pork fat, apples, onion and spices, making it moist and crumbly. The dark red mound was topped with a fried egg, but I wanted to get a taste of the dish without the distraction – what I experienced is difficult to put into words. The rich forkful melted in my mouth, with no trace of the metallic taste that often accompanies blood-based dishes, giving me a new death row last meal choice.

The roast dinner was delicious in its simplicity – pure, fresh and flavorful ingredients were cooked to perfection, keeping in line with the traditional preparation. Fanciful desserts that were created by Chef Collins were brought to the table, my favorite being a moist and warm chocolate torte topped with a scoop of dulce de leche ice cream and glazed bananas that were like a vertical presentation of bananas Foster. Chef Collins was present off and on during the course of the meal, answering questions and making us want to return for dinner. He explained that while the focus is on traditional and inspired British cuisine, it was by no means limited to it. Chef Collins has brought together the best of centuries of elegant and simple European cuisine with some modern twists in an outstanding presentation that left me stuffed, yet craving more. There are three things I hope the British don’t attempt to reclaim: the melody to “America”, the original 13 colonies and Chef Collins. As historians look back on our lunch, for a thousand years men will still say, “This was their finest hour”.

See images from Val’s lunch at Waterloo and City

3 Responses to The Offal Truth