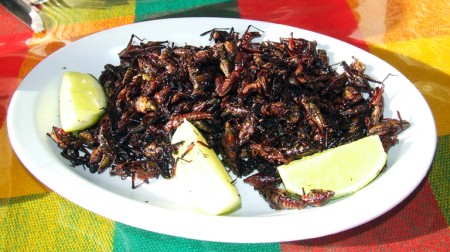 A plate of tasty grasshoppers at Guelaguetza Restaurant

As most people who know me will attest, the opportunity to try unusual cuisine is one I will never turn down. I had learned that a local restaurant offered cuisine typical of the Mexican city and state of Oaxaca, including chapulines (grasshoppers). Guelaguetza is a local chain of 5 restaurants in the Los Angeles area, and I had been trying repeatedly to eat at their restaurant on Palms Boulevard but got phone recordings stating that they were closed “due to an accident.” There was no elaboration on what the accident was, so I surmised that maybe it was a plague of locusts. Not being one who is deterred by minor setbacks like a restaurateur cutting off an appendage, I visited their 8th Street restaurant with Trippy Foods webmaster, Josh (who is almost always willing to try unusual food items.) 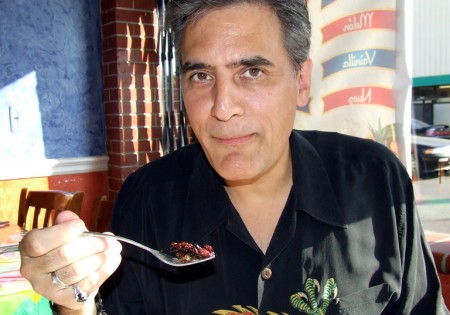 Just a forkfull of insects helps the Oaxacan go down

The restaurant itself is painted orange inside and out; it is furnished simply, with colorful tablecloths resembling Mexican blankets – a plain, simple place with focus on the food. Before being seated, I asked the waiter if they served chapulines at that location, which he confirmed. I didn’t order them immediately, as I wanted to peruse the menu and see what other Oaxacan delights they offered. The menu offered chapulines two ways – simply fried (with salt, garlic and lime) and Chapulines a la Mexicana (cooked with tomato, onions, chiles and Oaxacan string cheese). I asked which preparation was typical of how the grasshoppers are eaten in Oaxaca, and was told the fried chapulines were more common, so we ordered them that way. I also ordered the tamal Oaxaqueño de mole con pollo, while Josh left his entree choice up to the waiter.

The waiter brought the chapulines to the table first. I imagined the look of horror that a diner might register if they didn’t know what “chapulines” were after ordering them, faced with a plate topped with a hot, crispy mound of grasshoppers. There is no disguising this dish; it’s not like substituting the Komodo dragon on the menu with turkey and duping unsuspecting patrons – these are USDA Grade A insects swarming on the plate. Unfettered by sauces and vegetables, you couldn’t even mistake them for crickets. We tried a couple of forkfuls of them as-is; there were several lime wedges on the plate to further obscure the taste if necessary, but the grasshoppers were fried to perfect crispness with just the right amount of lime, salt and garlic – only the lime added extra zing to the dish, giving them a citrus tang. They were smoky, crispy and delicious, without the nondescript leafy taste you get with some voracious leaf-chewing insects (see the posting on silkworm pupae); hot, fresh tortillas were provided which allowed me to make a crunchy insect taco – I missed the cool freshness tomato and lettuce would have added, but enjoyed them nonetheless. 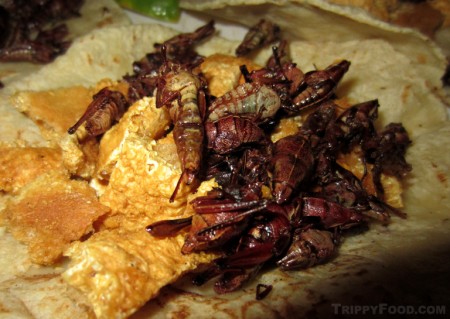 When the entrees arrived, they had both been prepared with black mole, with the dark color coming from the use of chocolate. Oaxacan cuisine uses of a variety of moles, in a wide range of colors specific to their ingredients. The tortilla chips brought out at the beginning of the meal were topped with a sweet red mole and crumbly Oaxacan cheese (quesillo) that obsoleted the bowl of red salsa that was served on the side. The tamal was a square of what appeared to be finely ground white cornmeal masa stuffed with chicken and topped with the black mole; it was still encased in the banana leaf with the top removed. The mole added a sweetness to the tamal that coupled with the fact that the dish was made without chiles made it taste like a desert tamal. Josh’s meal was a delightful mess – enchiladas with quesillo and string cheese, topped with black mole and a couple of pieces of what looked like skirt steak. It seemed like a contradiction eating Mexican food that was sweeter than it was spicy, but it was delicious. I had ordered coffee with my meal, and immediately the smell let me know that it was Oaxacan coffee made from locally-grown beans and flavored with cinnamon and brown sugar. I wanted to try the rose petal ice cream for dessert, but they only had a few of the advertised flavors, including tuna. I’m sure the thought of tuna flavored ice cream sounds par for a Tokyo ice cream parlor, but before you picture Charlie being ground up in an ice cream churn, tuna is the Spanish word for the prickly pear fruit of cactus.

The interior of Mexico has other unusual dishes that also feature insects, but when you can’t get to Mexico at least you can find its cuisine at the end of a short drive. I’m still trying to find an insect taste treat native to the Unites States, but so far most other countries have us beat. Looks like I’m going to have to get out the butterfly net and some boxes of Jell-O…