Let The Chips Fall Where They May 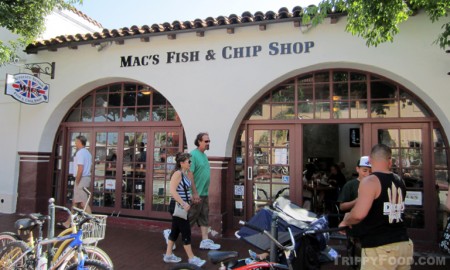 When you’re a European-born chef trained in classical French cuisine, it only stands to reason that the obvious thing to do in order to utilize your culinary talents is to open a chip shop in Santa Barbara, California. Although British expatriate Grant “Mac” MacNaughton offers typical and traditional chippy fare (such as fish and chips with mushy peas), he also playfully takes the menu where few men have gone before. The first indication that MacNaughton has turned the chip shop on its ear is the decor – where most respectable chippies in the U.K. might barely achieve a “B” letter rating in Los Angeles county, Mac’s is sparse, crisp and neat. There’s no menu board menu with plastic letters missing here, no bins of pre-cooked fish or chips under lamps – everything is made to order and the place is spotless. 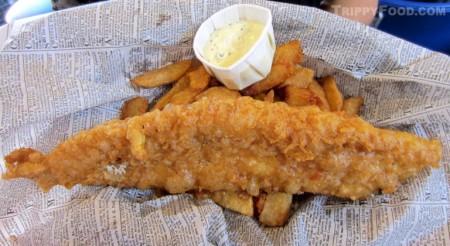 As with any chip shop worth their salt, Mac’s uses cod as their fish of choice; however, instead of the familiar Atlantic cod used for battering and frying, theirs is sourced from Alaska. All of Mac’s fried items (which include the fish and chips) are served in baskets lined with fake newsprint to recreate the British experience without getting ink all over your hands. The ample fish filet is flaky, hot and tender with only a slight residue of oil from the fryer. Bangers are also available from the menu – these are sourced locally, made especially by Shalhoob Meat for Mac’s. Naturally you can also get a side of baked beans (Heinz, of course – the most popular tinned baked beans in the U.K., courtesy of the folks from Pittsburgh, Pennsylvania known domestically for their ketchup), the aforementioned mushy peas, curry sauce – everything you’d expect to find in a British chippy right down to the malt vinegar and brown sauce. Mac’s also carries homemade meat pies, including Cornish pastys, Shepherd’s pie and cheese and onion leaving little to want for the displaced Brit, save for possibly some black pudding. 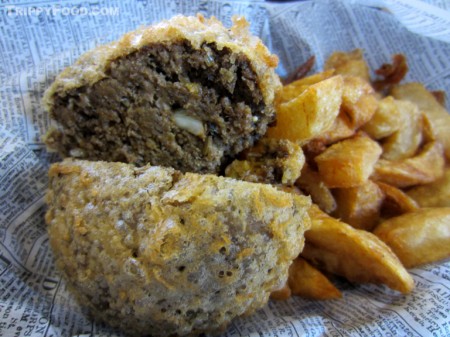 As good as Mac’s fish and chips are, I’m as likely to queue up for a newspaper-full in Santa Barbara, California as for a Chicago hot dog, bowl of New England clam chowder or Tex-Mex combination plate – what got me through the open-air archway was the sign in the window advertising something I’d never seen before, even in the U.K. – battered haggis. MacNaughton makes his haggis in large batches, which can be a gamble since it doesn’t keep long once prepared.  Imagine a baseball-sized orb of the illustrious oat and organ mélange, dipped in the beer-based fish batter and deep fried to dark brown. Split with a fork, the steam rises from the gut ball’s innards and up to the nostrils to confirm that Mac’s haggis is the real deal (sans lights (lung), which the state of California bans in either fresh or imported haggis). The taste is a tad less earthy than a sturdy haggis consumed in the U.K., but it is still heady, fragrant and bursting with flavor although in its deep-fried form the inside temperature is slightly less than the surface of the sun. 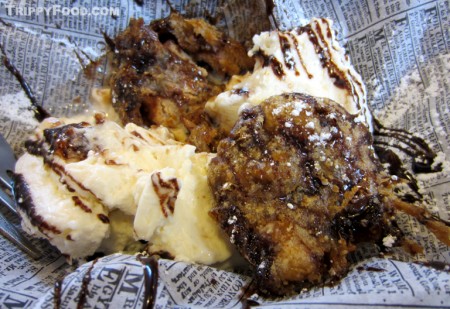 If you’ve saved room for dessert, Mac’s has taken a cue from New York’s The Chip Shop and offers up a variety of deep fried candy bars. With fried Snickers being old hat, I opted for what sounded like the perfect oil-submersible snack – the Reese’s Peanut Butter Cup. The problem with the Reese’s cup is that the peanut butter turns to lava-like goo in the Frialator which fights off the batter and results in a fried blob; as unattractive as this sounds, the taste is heaven. The fried candy bars are available simply with a light dusting of powdered sugar or nestled in a generous dollop of whipped Chantilly cream and drizzled with Ghirardelli chocolate sauce, and while it may have been overkill I opted for the dressed-up version. The dessert comes with two Reese’s cups, about twice the limit of how much of the ultra-sweet confection I could handle.

Even with the proliferation of British flags and smattering of regional signage I’m not sure I would classify Mac’s as an authentic chippy where you can shut out the masses on State Street and be transported to the Olde Country, but the classic chip shop fare served up with delightfully modern and tongue-in-cheek twist makes Mac’s a nice diversion from the standard Santa Barbara restaurant options; think of it as a chip off the old block.