Do The Funky Chicken 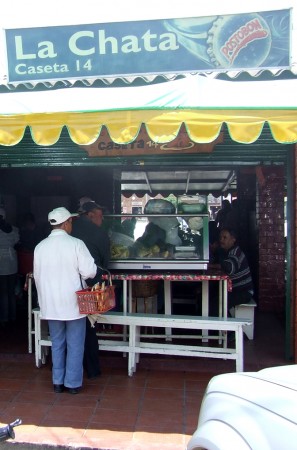 La Chata is proof that the simplest pleasures are the best

The food of Colombia is an overwhelming assault on the senses. The rich, hearty cuisine of the people is the ultimate in comfort food, especially if your comfort zone overlaps the twilight zone. I will devote an article on the general food of Columbia, but there are a few culinary treats that deserve their own article, and pescuezo de gallina relleno is one of them. The name literally translates as “stuffed hen neck”, which is as fine a description of the poultry item as you could hope for.

Pescuezo de gallina relleno is not found across Columbia; it appears to be a specialty of the tiny town of Ubaté, about an hour’s drive to the north of Bogotá. The town is so renowned for their milk production that they have a statue of a cow in the center of the traffic circle as you first enter, past rows of specialty cheese shops. As tempting as the artisan cheeses are, we are on a mission to sample the gallina relleno, and most locals agree that the best is to be found at La Chata. Before images of a colonial-style restaurant with a red tile roof and a maître d’ in quaint ethnic clothing pop into your head, La Chata is essentially a stall in the middle of a row of similar stalls assembled around an open plaza. The stall is open at the front and back and furnished with white picnic tables and a counter where you can watch the food preparation over a wood flame stove. There are no decorations, nothing fancy here – just the sights and sounds of the locals enjoying the food. 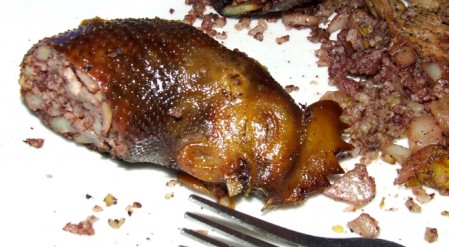 I don't believe there's any question about what that was

I had seen the gallina relleno in a glass case at the front of the stall on a previous visit and knew I had to try it. The preparation is simple and yet quite unusual – the chicken’s head is cut off from the base of the neck. The beak, bones and flesh are removed, while the skull and cockscomb are left intact. Chicken blood is mixed with tiny diced potatoes, rice and peas, which are then stuffed back into the neck, with the skull blocking one end of what is essentially a chicken skin sausage casing. The open end is sewn shut and the glorious mess is roasted in the wood flames. The meal consisted of two pieces that were cut into smaller segments, revealing cross sections of the rich, delicious filling. The first bite was amazing; the rich, earthy taste of the chicken blood had been absorbed by the rice and potatoes, and every subsequent bite was heaven. The outer skin toughened up a bit during the roasting, making the cockscomb leathery but not impossible to eat. I attempted to pry the skull open to eat the chicken brain (if such a thing even exists), but it was roasted shut and the skin around the skull wouldn’t give. Someone else in our party had ordered the gallina, which was essentially a hen roasted with unlaid eggs still inside. Since she had no desire to eat them, I was offered the privilege. The eggs were almost all yolk, and with no hardened shell they were bite-sized nuggets of eggy goodness. They tasted like egg yolks boiled in chicken broth (which is essentially what they are). 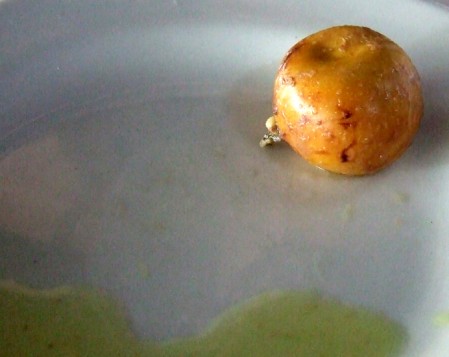 An unlaid egg from inside the gallina

After the meal we walked around town awhile. Ubaté is a bustling little town, and the gothic-style Basilica Menor de Ubaté which stands watch over the main plaza is worth a visit. The church was completed in 1939 and its white spire can be seen from a distance like a delicate alabaster sculpture. If you decide to go, do me a big favor – let me know how the cow’s feet are. I’ll have to get those on my next trip to Colombia.