In Defense Of The Twinkie 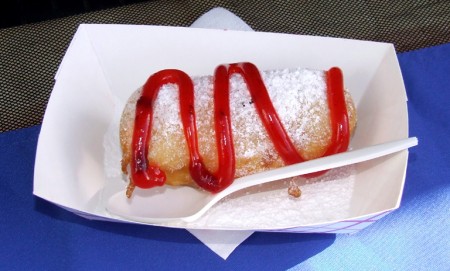 How can something so wrong be so right? Just the thought of eating a Twinkie sends a chemically-induced sugar rush up the back of my spine, so what would prompt me to brave the cellophane-wrapped snack that looks like Sponge Bob’s coffin? The opportunity to have it deep-fried. There was still a high degree of risk, but I wanted to see what the frying process did to make this foam brick from Hell edible (or more inedible). The invention of the deep fried Twinkie in 1992 is said to be attributed Shea Apple, a transplant from Great Britain who opened a chip shop in Brooklyn, New York (appropriately named “The Chip Shop”). Unlike your neighborhood chip shop (or “chippy” in the UK), The Chip Shop batters and fries everything that will survive the Frialator including pizza, macaroni and cheese, and Mars Bars. After experimenting with various snack items, he found the Twinkie to fry up quite nicely. They use the same batter used for frying fish (for the fish and chips); it is served sliced lengthwise, dusted with powdered sugar, sitting on a berry sauce-drizzled plate. 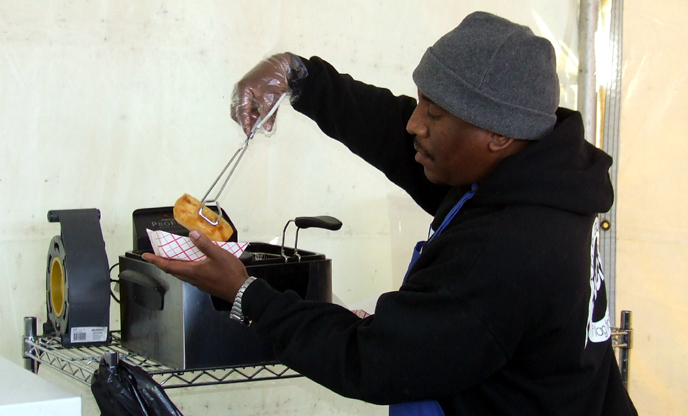 Golden goodness right out of the fryer

Since the initial hot oil bath in 1992, the deep fried Twinkie has grown in popularity to take its place beside its corn dog cousin as standard county and state fair food. Apparently following John B. L. Soule’s sage advice, a take on the deep fried Twinkie found a home on the west coast at no less an appropriate location than The Rose Bowl. On a recent trip there (for the swap meet – football and I don’t understand one another), I happened upon a food booth (The Dessert Factory) with the magical words “Fried Twinkie” on their sign; they also advertised fried cupcakes, but the Twinkie is the item that had piqued my curiosity. The preparation is slightly different than The Chip Shop’s – the Twinkie is unwrapped and dipped unfrozen in funnel cake batter (making it the perfect carnival food), then held in the fryer with a pair of tongs. Straight out of the fryer, it is placed on a paper plate where it gets a light flurry of powdered sugar snow and then a choice of sauce toppings (including strawberry, berry and chocolate). I opted for the strawberry, applied in spin art fashion. Unlike its photo on the web page, the Twinkie did not have a wooden stake through its sugary little heart. 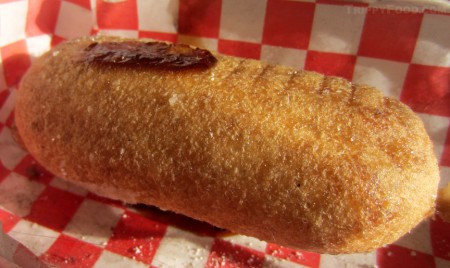 3 dollars later, I was poised to sample the hot confectionary dish knowing that it would probably taste better because I was outside. Anyone who has bought a pretzel, hot dog or bag of chestnuts from a New York City street vendor or a burrito off an L.A. taco truck will back me up on this. The plastic spoon went in and I tasted my first bite in utter amazement. Everything that I hate about Twinkies was purged through the miracle of hot oil. The cellulose sponge quality was gone – the batter was soaked up into it and fried into a light crispy texture that wasn’t greasy. The sugary center, usually having a grainy, paste-like quality was just at the gooey, melted stage without being liquid. Although not as sweet as baklava, it is still a dessert you wouldn’t want more than one of – it is a major sugar rush. This qualifies as a fun dessert to eat when out at an event, but it’s not going to have me running into the nearest 7-11 for a Twinkie fix or even tempt me to try making it at home – I’ll leave that to the trained professionals.

2 Responses to In Defense Of The Twinkie