A Story That’s Not Hard To Swallow 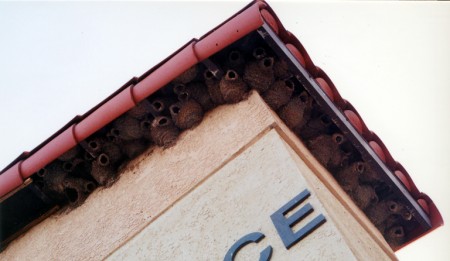 Close up view of the swallows nests

In 1776, while the English colonists were throwing down with the British in the east, Spain was having its way with the Acjachemen band of native Americans in the west, founding a mission in the place now known as San Juan Capistrano, California. San Juan Capistrano was the 7th mission founded in Alta California, and boasts the oldest structure still in use in California (the Serra Chapel). When the stone church was built (a departure from the adobe used in the other mission churches) it was one of the tallest structures in California, making its high walls an attractive substitute for the cliffs where the Cliff Swallows (Petrochelidon pyrrhonota) had built their homes for milennia. The swallows built their mud nests at the mission, flying off to the western coast of South America in the winter, returning again in the spring to procreate. 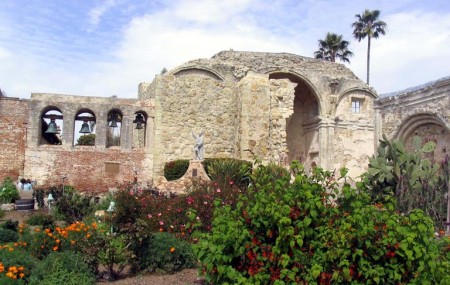 Ruins of the old stone church

The mission inhabitants noted that the swallows “miraculously” returned to the mission on the Catholic feast day of Saint Joseph (March 19) each year, giving the event divine significance. Not being naturalists, they failed to realize that the reason the pagan feather dusters returned on March 19 was not because of Saint Joesph, but because of the vernal equinox – spring. Yes, spring, when thoughts of procreation fill their pointy little heads. Swallows reuse their nests year after year (not surprising knowing the amount of time it takes to make them, one beakful of mud at a time), so returning to the mission or any tall cliff-like structure where they had previously built their dream home is a foregone conclusion. The odd fact is that the individual bird does not reuse the same nest; the colony shares the nests, and it’s first-come, first-served. Their aerial dance when choosing their nests is a sight to behold; solo pilots drop out of the swirling cloud to claim the choice real estate.

In the 1930s, the Swallows Day Parade evolved from a school festival (Fiesta de Las Golondrinas, or Festival of the Swallows) to the celebration it is today. The parade winds past the front of the mission, and normally features floats, equestrian riders and marchers that celebrate the mission’s Spanish and Native American heritage, and the return of the swallows. There are tents and booths set up inside the mission, with music, food and celebration – about the only thing missing is the swallows. Right about now, you’re asking, “What’s the deal with a parade and festival celebrating the return of the swallows without, um… swallows?” Good question. Well for starters, why ruin a damned fine party just because the guest of honor doesn’t show up? Where else are you going to see someone standing on the shoulders of a marching bull while doing rope tricks? You know you want that fresh native food they’re cooking inside! So go to the parade and fiesta and I’ll share a little secret with you. 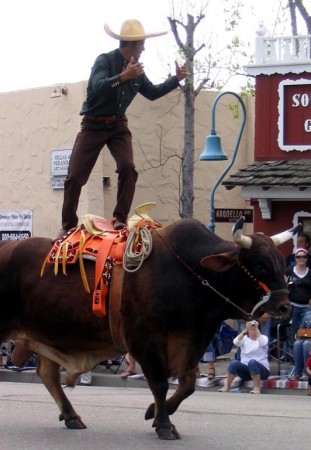 Just plain nuts (so is the vaquero)

Around the turn of this century, work needed to be done on the mission to ensure it met earthquake resistant standards. During this process, the mud nests had to be removed from the tops of the mission buildings, and I think you and I both know “removed” means “destroyed”. So what’s the problem? The birds will come back, build new nests, and everyone goes home happy, right? When you get off the plane after a 6-month trip south to find your neighborhood gone, you think twice about rebuilding, so they simply went elsewhere. The mission tried all kinds of ideas to get them to come back, such as mounting ceramic nests, but to the swallows these were the equivalent of FEMA trailers. So here’s where I share my secret: go to the festival, have fun, and before sunset get in the car and take a short drive over to Saddleback College. Head over to the Technology and Applied Science building and park your lawn chair by the arched tower at the entrance, for this is one of the locations where the colony now calls home. You can see the swallows here all spring, but the show they put on as they descend in a mass of moving feathers to claim their nests on their return is breathtaking. You can still see the world famous return of the swallows, and just for fun, bring something from El Pollo Loco to munch on…