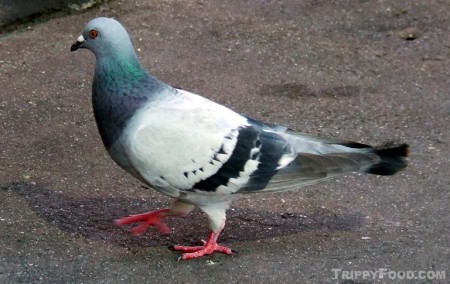 You expect me to eat THAT?

Yes, pigeon – the omnipresent rat with wings, the oil slick bird; friend to the car wash, enemy of Kings of Leon. Where the hell did these avian kamikazes come from anyway? Well, would the urban bag of feathers we see eating popcorn in the park garner more of your respect if it was known that it was a member of the same family as the bird of peace? The pigeon is actually a dove (rock dove, to be specific) that originally hailed from the Mediterranean countries and the Middle East. Eventually it spread to most of the northern hemisphere, not by migration but by intentional introduction to other areas. Most of the pigeons you see clamoring for scraps of your lunch today are feral, having adapted well to city life over the years and using building ledges, eaves and windowsills to substitute for their original homes on the cliffs. As with any other plentiful invasive species, pigeon became a food source first in Europe, although it’s popularity in the U.S. is slow to catch on. Much like the pseudonym “escargot” that helps the gastronomically timid stomach the thought of scarfing down snails, the pigeon goes by the native American-sounding moniker of “squab” (which is technically the name for a young pigeon, selected at that age for its taste and tenderness). It isn’t clear what is the aversion people have for eating pigeon, as dove, chicken, quail, duck, goose, pheasant and turkey seem to be fair game. The only negative to eating the bird is that it is paltry poultry – there isn’t a great deal of meat on it. If you’re served pigeon in a restaurant, the telltale sign is that it looks like a scrawny, Skid Row chicken. 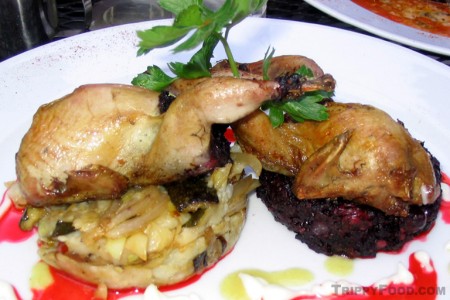 Pigeon at The Monro in Liverpool, UK

My first experience with eating pigeon was in Liverpool, where it is a relatively common menu item listed simply as “pigeon” (no pussy-footing around here). The Monro is a gastropub with a rotating menu that features cuisine from the UK, the Mediterranean and other parts of the world. Although relatively new in Liverpool terms (the city is over 800 years old), it has a warm and modern feel while maintaining a pub-like charm. On the day I visited (my first ever in Liverpool) I was brought to the Monro for dinner by a friend who thought I might enjoy the cuisine. I saw pigeon on the blackboard and was sold, having ordered the last one they had on hand (which was worth the two in the bush). The meal came with two pigeons – one served on a bed of cooked-down beets, the other nestled atop bubble and squeak (a side dish made from potatoes, cabbage, onions, leeks and or other vegetables that gets its name for the sound it makes while cooking). Lest you get the impression that there were two large birds roosting on my plate, a sprig of cilantro between the birds’ legs made it appear as though they were holding up a giant magnolia tree. What little meat there was on the birds was moist, with only a slight pungent taste, complemented well by the vegetables. 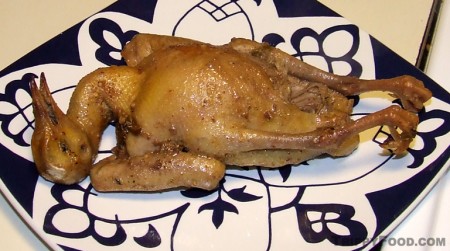 My second run in with the bird was when I decided to cook one myself. I found a hermetically sealed plastic-wrapped pigeon in the freezer section of San Gabriel, California’s Hawaii Supermarket. The fist-sized package simply read “Squab”, and I figured that for less than 5 dollars, it was worth the freshman attempt. Preparing the pigeon was an experience that I laugh at in hindsight, but I don’t recall it being a chucklefest at the time. After thawing the package, in noticed that it was filling up with the pigeon’s blood between the plastic and its skin. Additionally, features such as the complete head and feet became more visible. I noticed that under the large “Squab” letters (in tiny print) was a line that read “New York Dressed, Uneviscerated Pigeon.” It took some research but I discovered that New York Dressed did not denote it was wearing a powder-blue tux with ruffled shirt, but instead indicated that it had nothing removed, but had been bled. Uneviscerated meant exactly what it sounds like – it still had all the parts and internal workings the bird-god gave it. I cut open the plastic in the sink and the pigeon sprang out like one of those foam capsules you drop in a glass of water to make it grow. Still a small bird, I had to figure out how to open the body cavity to remove the organs neatly without having to gut it like a fish. It took almost half an hour to clean it out and I found myself pulling out bits of lung, intestine and other dicey items. The heart refused to come out; requiring me fisting the fowl creature to get a decent grip and then yanking it free. My preparation was simple: I put it in a covered glass dish with some olive oil, garlic, mustard, ginger, black pepper and rosemary with a little grape jelly for sweetness and then cooked it until it was done throughout (which didn’t take long since there was little meat). I ate the pigeon without any side dishes, and although it was flavorful it was hardly satisfying.

Eating pigeon conjures images of trapping the birds near a dumpster by homeless and destitute people, yet it’s finding a place in more and more restaurants and is definitely worth a try. If you’re up for the challenge you could try preparing it yourself, and when the family gathers at the table asking what’s for dinner, you can flip them the bird.