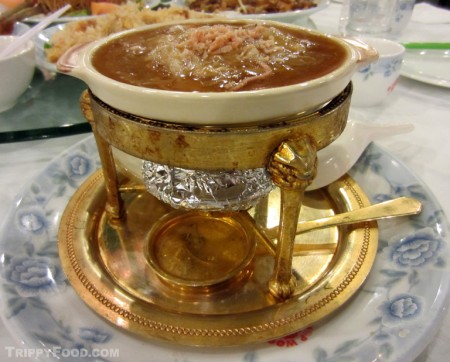 The result of 4 days' work

For hundreds of years, sharks fin soup has been a rare delicacy served at banquets, weddings and major social events; initially it was only enjoyed by Chinese emperors as a result of the intense and time-consuming effort to prepare the dish, as well as the risk and difficulty associated with obtaining the shark. The reign of this regal dish may be coming to an end, at least in the Golden State, due to the recent passage of California Assembly Bill 376. The bill as introduced would make it a criminal offense to own, sell or distribute a shark fin, although a provision in the law allows possession of the fin to anyone with a license to catch sharks (privately or commercially).  Although this seems contradictory, the provision implies that the shark will be taken in its entirety – the purpose of the law is to attempt to eliminate the barbaric practice of finning, where the fins are removed from the landed shark and the still-alive fish is unceremoniously dumped back into the sea to die of starvation or suffocation as a result of the inability to swim. The price on the open market for a single fin can go as high as several thousand dollars, which is the reason some fishermen simply don’t care to take up valuable real estate on board for the relatively cheap shark meat. Anyone who has purchased a shark fin for the purpose of making soup can use fins already in their possession provided they purchased or acquired it in 2011, and only through mid-2013. 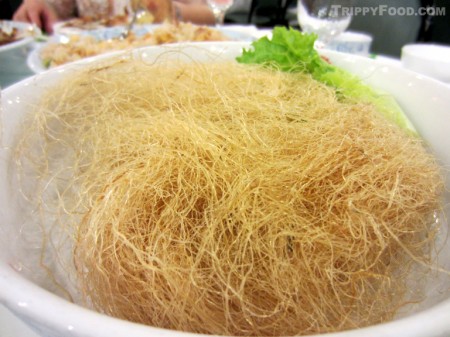 The dried and separated shark fin

Before you jump to the conclusion that Chinese chefs are sailing the ocean blue in pursuit of Jaws for the purpose of dismemberment, restaurants and chefs procuring the fins typically buy them in frozen or dried format. The dorsal (top) fin is the most sought-after, with the pectoral fins (the front ones that propel the shark) coming in a close second. Although the other fins are taken as well, these carry a smaller price tag because of their size – the larger the fin, the more expensive it is. 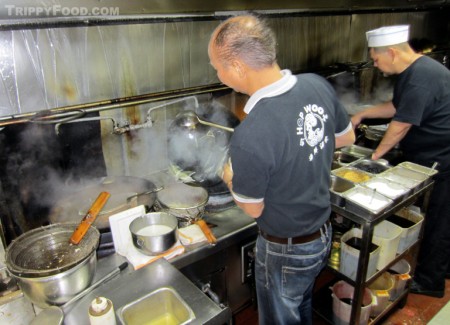 Chef Liang cooks sprouts for the bottom of the bowl

Although consummation of the soup is no longer limited to royalty, it’s a dish that still costs the proverbial king’s ransom. The preparation of the fin literally takes days, with the final product taking minutes to create. In most cases, the dried fin has already been cleaned with its tough skin removed and needs to be reconstituted in plain water. The fin is placed in water that has been boiled (never while the water is boiling) and left to soak overnight; this process is repeated over several days with fresh water until the flesh can be stripped off the cartilage in thin hair-like strands. To shorten the preparation time, the strands are sometimes dried and stored (in this state they’ll last months) to be reconstituted one last time before soup’s on. 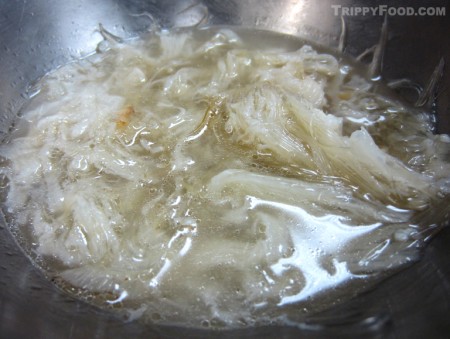 Even once the shark “noodles” have been cooked they’re relatively tasteless, however, they have the uncanny ability to amplify the flavors of the other ingredients in the soup. The flavor is entirely derived from the stock – for the most part it is chicken-based with higher quality stock derived from simmering entire chickens, although a fancier restaurant may make a “high soup” using chicken, pork and occasionally seafood. To witness the final stages in the preparation of shark fin soup, I was honored to be invited to L. A. Chinatown’s Hop Woo, where the promise of dining like royalty awaited. California Assembly Bill 376 may not be the only cause of the soup’s demise, Chef Lupe Liang explained that making the soup is a dying art – young chefs don’t bother to take the time to learn how to properly make it from the old guard, making the soup an increasingly rare delicacy. Chef Liang demonstrated the final construction of the soup in the madness of the kitchen and invited us into the belly of the beast. 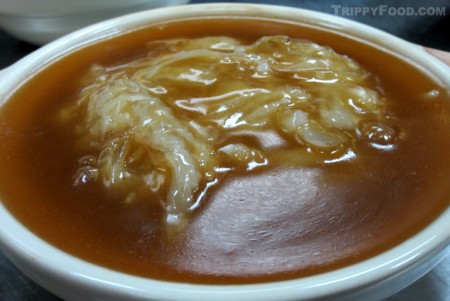 The shark fin with broth

Hop Woo’s soup began with flash cooking white sprouts, which while still firm were placed on the bottom of the individual bowls; the reconstituted shark was then quickly cooked in the same manner and gently placed atop the sprouts in the bowl. The creation of the broth will vary drastically depending on the chef; Lupe started by browning cornstarch which acts as a thickener. He slowly added the stock (which was made with the shark cartilage, chicken, beef, ham, and spices) until the broth reached the look and consistency of brown gravy, at which time it was slowly poured over the sprouts and shark. As a finish, tiny shavings of special ham were sprinkled on top of the soup; Lupe mentioned that some preparations also finish the soup with chicken, depending on taste. We left the kitchen before the soup did, anxiously anticipating tasting the culmination of four days of work. 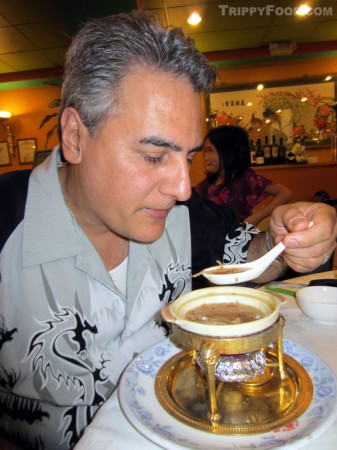 A dish as regal as shark fin soup deserves an elaborate presentation – the individual bowls we watched take shape in the kitchen were brought to the table in a warming dish made specifically for the soup. A ceramic bowl was placed in a gilded trivet with a Sterno burner beneath it; the bowl was covered with a ceramic lid that allowed the soup to reheat faster. Once the broth began bubbling, the Sterno was extinguished (with a gilded snuffer, naturally) and the lid was removed. Lupe suggested adding a dash of red vinegar to the soup, to give the brew a little bit of a kick. There wasn’t even the faintest aquatic aroma from the dish; the soup had a meaty, spicy fragrance. I maneuvered the spoon in a way to get a representative sampling of the broth with the sprouts, shark, and ham and was struck by the variety in textures over the taste. The sprouts still had some snap to them and the shark had the consistency of extremely al dente noodles or jellyfish with a delicate crunch to the teeth. The rich broth was warm all the way down and provided all the flavor of the soup, and I would have wondered exactly what shark tasted like had I not enjoyed shark steak on previous occasions.

I admit that I brandished a flash of guilt wondering how the fin was harvested, and although I don’t anticipate eating the soup regularly (while I’m legally able) I was fortunate enough to be invited to partake of this treasure and dine with Chef Liang knowing the labor intensive process required to make it. If shark fin soup has to become nearly extinct to prevent the wolf of the sea from perishing, so be it; I imagine the cost of legally harvested fins will go up, as will the black market price of contraband fins, but if the term “man eating shark” reverts back to the fish instead of the description of a shark fin soup connoisseur, I can live with that.

GALLERY: See images from Val’s visit to Hop Woo in L.A.’s Chinatown to watch the preparation of and enjoy shark fin soup