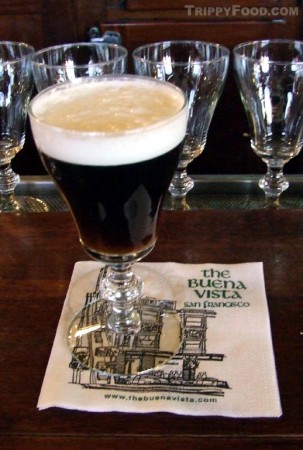 Guaranteed to take the chill out of you

First off, there is no Sean Valdez hand picking the finest beans in the coffee plantations along the Twelve Bens with his faithful Irish Draught horse. Irish coffee is a somewhat modern libation, invented in Ireland in the 1940s in County Limerick:

There once was a head chef at Foynes
Who for only a couple of coins
Would rather quite briskly
Mix coffee, cream and whisky
Said New Yorkers who drank it, “It boins!”

I’m sure I’ve taken liberties with the Gaelic pronunciation of the Foynes seaport, but we’ll attribute it to poetic license. Before the opening of Shannon Airport on the flats farther up the port, Foynes was a landing spot for seaplanes and other aircraft; Chef Joe Sheridan came up with the idea to create a drink that warmed passengers disembarking from transatlantic flights on the cold inlet. According to the original “recipe”, Caifé Gaelach added Irish whiskey and sugar to hot coffee and then topped with a thick cream that floated on top. For authentic Irish coffee, the cream is not mixed into the coffee and brown sugar is the preferred sweetener (in fact in 1988, the National Standards Authority of Ireland instituted “ID 268, Irish Standard #417 – Irish Coffee” to describe the proper way to maintain authenticity and integrity of the hot beverage). 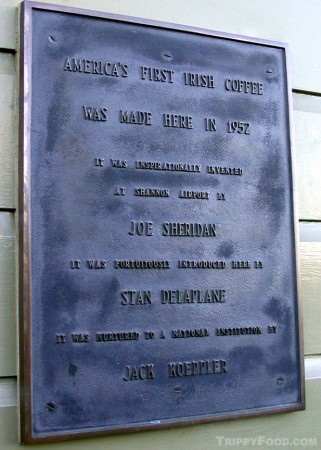 It is written in bronze, not stone

Journalist Stanton Delaplane is credited with bringing the drink to the United States, having sampled it on a trip to Ireland while working as a travel writer for the San Francisco Chronicle. Delaplane approached the Buena Vista Cafe to propose they serve the drink, and after several marathon test kitchen runs, the drink familiar to San Franciscans was born on November 10, 1952. Although Tom Bergin’s in Los Angeles also claims to have discovered the drink (as an archaic neon sign out front still suggests), they state somewhat vaguely that they’ve been serving it since the 1950s. Anyone who has been in San Francisco when the cold fog rolls in and wraps itself around you like a misty ice cube would probably agree the drink is more suitable for that clammy clime than sunny SoCal.

The Buena Vista has a slight variation in production than with Sheridan’s drink; the glass mugs are first filed with boiling water and allowed to set for a while to get the mug hot; after the water is poured out glass is partially filled with hot coffee. Where Sheridan used a teaspoon of brown sugar, the Buena Vista drops two white sugar cubes into the mug (along with a shot of Tullamore Dew Irish whiskey) and stirs until dissolved. In the old country, the cream is poured over the back of a spoon raised slightly above the coffee, while the Buena Vista’s technique appears to us the spoon as a baffle. In early experiments the cream would naturally sink to the bottom, but after conferring with a local dairyman the Buena Vista found that frothing the cream after aging it for several days allowed it to rest on top of the coffee. 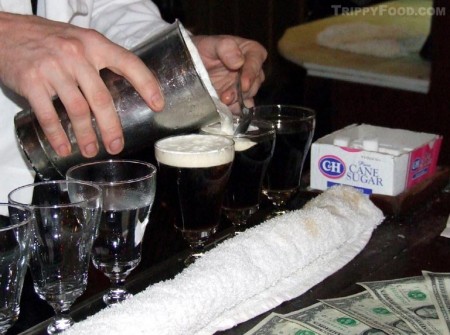 Topping off the Irish coffee with cream

Watching the production of an Irish coffee at the Buena Vista is a spectacle that today still brings in a crowd; the bartender rarely pours a single coffee. Normally the bar is lined with up to twenty mugs with the bartender working in quick precision to fill them all (a tip is appreciated for this caffeinated spectacular, which is usually done in front of a large crowd). The Buena Vista’s location ensures that it is always packed; located on the corner of Hyde and Beach Streets, they are two blocks from Ghirardelli Square; across the street from the terminus of the Hyde Street cable car line; two blocks from Hyde Street Pier and the maritime museum; and, a brisk walk from Fisherman’s Wharf. The building itself carries some history – built as a boarding house, it was converted to a tavern in 1916. The main dining area is somewhat small; in addition to the old bar, the Buena Vista whips up a great breakfast (just plain coffee is recommended) with standard saloon fare served throughout the day. During most hours of operation getting a table is hard to come by; it’s not uncommon to see people standing over your table waiting for you to finish so they can grab the spot; the after-work crowd fills the joint to standing room only, mostly for drinks. 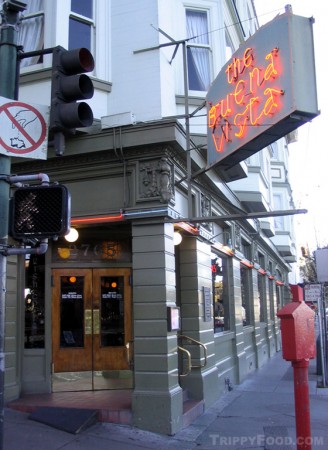 Naturally the Buena Vista is a popular spot on St. Patrick’s Day but when the cold sea air rolls in off the bay on big cat feet, anytime is perfect for warming your innards with Sheridan’s magic elixir. Now if I could only find an Irish kopi luwak…