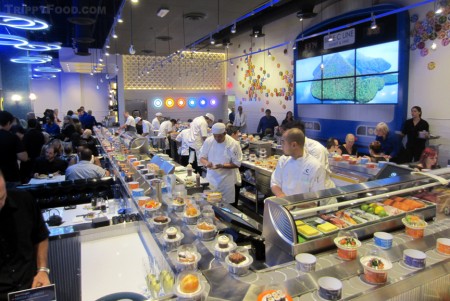 It would be wrong to dismiss Blue C Sushi as just another conveyor belt sushi joint, although they have literally taken the epithet “sushi train” to the next level. Seattleites have been familiar with Blue C’s concept since 2003, but the management has recently launched the restaurant-cum-subway station in the entertainment capital of the world – Hollywood. The newly-opened eatery is rife with Tokyo subway station imagery, the theme permeating the sleek restaurant, which appropriately flanks the historic Arclight Hollywood dome. Even the title is a play on words – management states that the motif is a tribute to a station on Tokyo’s blue “C” line; the tongue-in-cheek reference misses the mark a bit , since the  “C” (Chiyoda) line is actually green (the Tozai Line “T” is blue), but we’ll chalk it up to artistic license. 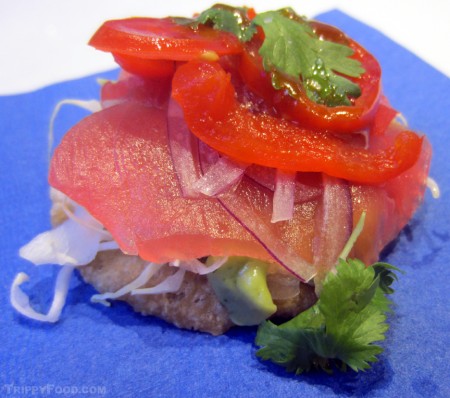 A huge monitor on the back wall is done up like the front of a subway car, and although one would expect to see train video looping, there is a never-ending stream of big, colorful pop video accompanied by a blaring playlist (that sadly does not feature train station announcements). The restaurant is boisterous; the tables small – the only thing missing is train pushers to compact you into your booth. The conveyor system employed is ingenious; plates are color-coded (they even look like subway station emblems) with the legend on the wall noting the price. Each plate chugs past strategically-placed vertical RFID scanners, which lets the kitchen staff know which items are on the belt and how long they’ve been “on the track”. 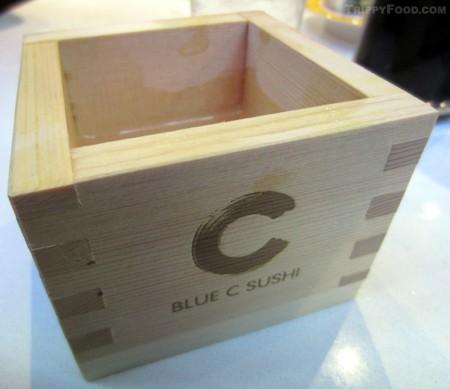 Box of sake, anyone?

The menu is designed by former Corporate Chef and protégé of “Iron Chef” Masaharu Morimoto, Jeffrey Lunak (now Blue C Sushi’s Culinary Vice President); locally, the chef helming their first venture outside of Seattle is Junya Enoki, also a member of Team Morimoto and former co-pilot for Chef Lunak at Morimoto Restaurant in Napa. In addition to grabbing plates as they glide by, you have the option of ordering from the menu table-side or at the bar (NOT a sushi bar, although you can order menu items and down masus of sake to your heart’s content). The dishes are moderately priced, and while some menu items border on bland, there are some notable signature dishes that are not only outstanding, but defy the unwritten laws of sushi. The first such item is the Wasabi Albacore Caesar Salad roll with wasabi Caesar dressing, stuffed with tuna, kale and anchovy. While it’s relatively certain that Caesar Cardini would to a barrel roll in his coffin reading the words “Caesar salad” and “kale” in the same description, the bitterness of the kale gives the roll a particular kick; it’s hard to tell if there’s egg in the dressing (there’s definitely wasabi to remind you that it’s sushi), and the anchovy is a good stand-in for the Worcestershire sauce. Regardless of its authenticity, popping one of these rolls in your mouth most assuredly is reminiscent of a Caesar-inspired salad – skip the soy sauce on this one. 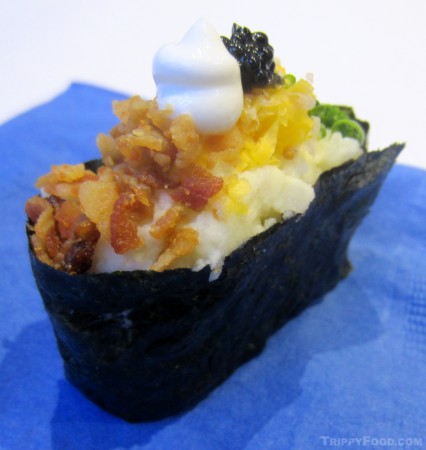 The stand-out dish on the menu is the absurdly clever Loaded Baked Potato Roll. Despite the dab of caviar on top employed to keep it real, this sushi is all steak house side dish. A thick layer of mashed potatoes blankets the sushi rice, which is then capped with a liberal application of crumbled bacon, cheese, scallions, and a dainty dollop of sour cream. This roll is best enjoyed with closed eyes; let the concoction fall apart on your tongue and I guarantee that within three minutes you’ll be screaming, “Way to go, Idaho”. This, alone, is worth coming to Blue C Sushi, but by all means sample their seafood (including freshly shucked oysters and shrimp with kimchi sauce). 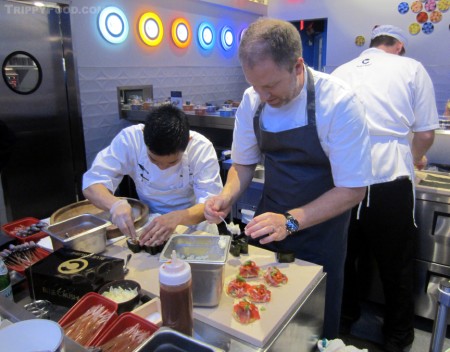 Undoubtedly there is much higher quality sushi in Los Angeles, but the fare is fresh, reasonably priced and served in a raucous but fun environment; the express Blue C car from Seattle has docked in Hollywood and is now boarding.

NOTE: The cost for the food was provided by Blue C Sushi. The content provided in this article was not influenced  whatsoever by the organizer of the event.