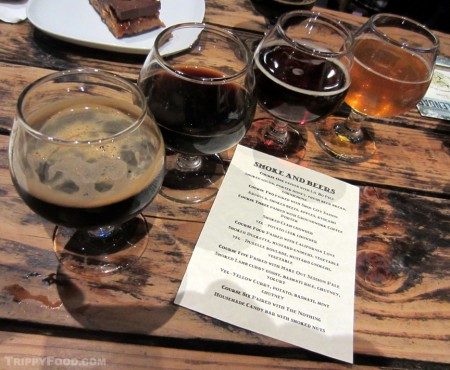 4 of the featured Smog City beers at Kings Row

Since opening as the first true gastropub in Pasadena, Kings Row Gastropub has aggressively presented culinary events such as whole hog roasts (or whatever flora and fauna fit in their custom-made Caja China).  With Certified Cicerone James Willison on board in tandem with Executive Chef Sundeep Vohra, many of these events highlight spirits and brews that bring out the flavor of the featured dishes or gastronomic theme. In February KRG held what is slated to be a monthly series of beer dinners to be feted on each first Thursday, with the sold-out inaugural dinner entitled “Smoke and Beers”, pairing dishes with a smoke element with complementary craft brews from Torrance, California’s Smog City Brewing Company.  While Kings Row’s kitchen staff interpreted the thought process behind the ashen courses, Smog City founders Laurie and Jonathan Porter were on hand to demystify the paired beers. 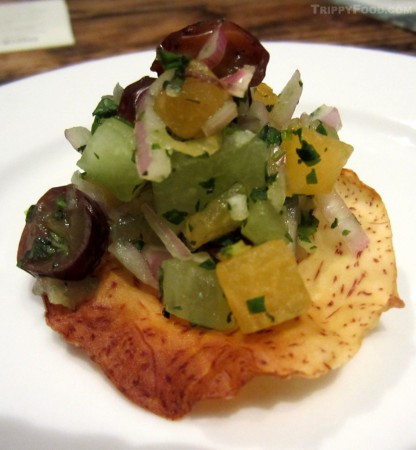 Chef Vohra commenced the dinner with a fresh amuse bouche of smoked honeydew and cantaloupe with red grapes and red onion assembled atop a taro crisp; the best approach was to burn through the appetizer in one bite lest the fruity payload disintegrate on the table. This was closely followed by a cheese board of thinly sliced house-smoked aged Gouda accompanied by a beer-centric puddle of porter honey (which was reminiscent of a sweet marmite) and a slice of beer bread baked on the premises; the dish paired well with Smog City’s Bo Pils, a light 4.5 with a bite to help cut the cheese. 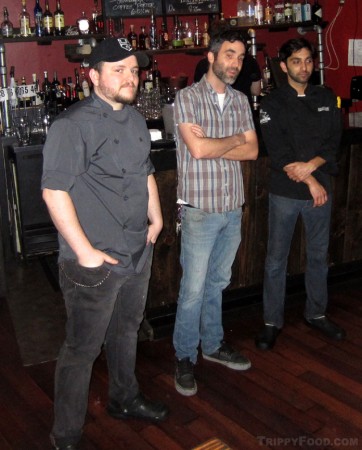 The kitchen staff at Kings Row describes the courses

The second course married a slightly-bitter Smog City Saison (a “farmhouse ale” brewed using French hops) to a tart arugula salad with smoked red beets, apple, daikon, avocado and cilantro with a lemon thyme vinaigrette dressing – a sharp-tongued pair paving the way for dark and murky times to come in the form of a rich potato and leek-based smoked clam chowder with crunchy bits of bacon conservatively strewn about the top. A vegetarian version of the starchy broth was available sans clams and bacon, still sturdy enough to bolster the accompanying Groundwork coffee porter. The beer blended the best of both worlds for lovers of stout beers and coffee, and it complemented the chowder admirably. The full-bodied combination of cream, leeks, pureed Shiro miso and smoked Yukon Gold potatoes brought the coffee flavor out of the porter, which would also have paired well with dessert. 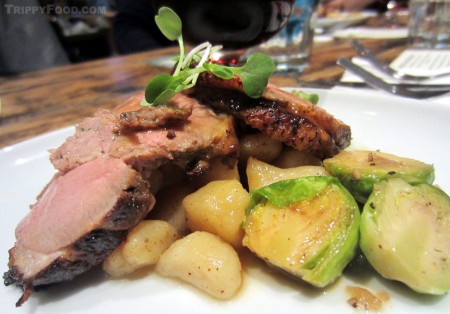 Round four expertly accompanied a duck “porchetta” (whimsically dubbed “ducketta” by Chef Vohra) stuffed with roasted garlic and herbed duck sausage with Smog City’s fruity California Love, which was brewed using pinot noir grapes and oak chips. The duck was moist and tender without being greasy, and was accompanied by mustard gnocchi and roasted Brussels sprouts which provided a nice contrast to the sweet beer. For the follow-up course, Vohra went back to his Indian roots to create a rich, red smoked lamb gosht (curry) dolloped over basmati rice with mint chutney and yogurt foam on the side. A light Make-out Session Pale Ale was designated as the beverage of choice to join the lamb curry – the unobtrusive light beer was perfect for not stepping on the toes of the strong flavor of the curry. 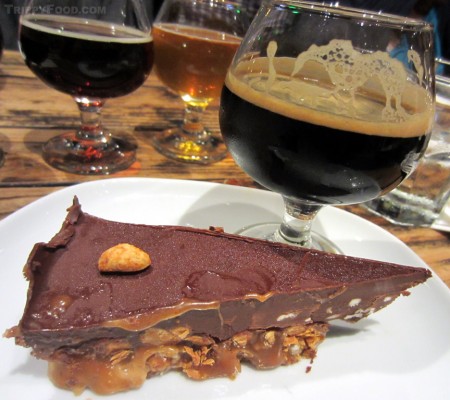 Since the aforementioned Groundwork coffee porter would have been a crafty choice for a dessert beer, I was curious as to what the fermented brew of choice would be that would stand up to the ultra-sweet “candy bar” pie that was brought out as the final course. This small wedge of Snickers-influenced confection was laden with chocolate ganache, smoked peanut brittle, and dolce de leche and was poised to do a St. Vitus dance on unsuspecting molars. Giving in to the chocolate theme, Smog City paired with their oddly-named “The Nothing” a hale and hearty stout brewed with chocolate nibs creating a sensation not unlike Willy Wonka on a drunken two-day binge.

Kings Row Gastropub’s first beer dinner was a cavalcade of flavors and scents that was a shot shy of overwhelming; with the dinners based on themes that pay tribute to the brewery name, I can only imagine what March’s Ommegang Beer Dinner holds in store. I’ll give you a moment to ponder that – smoke ’em if you got ’em.

NOTE: The cost for the food was provided by Kings Row Gastropub. The content provided in this article was not influenced whatsoever by the organizer of the event.