Oliver’s Prime at the Grafton on Sunset
West Hollywood, California 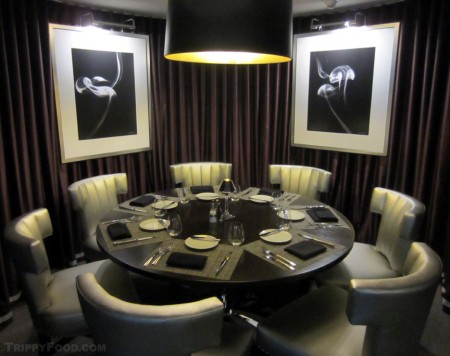 Hip dining without being hipster

The Grafton on Sunset hotel has been a crash pad in the thick of Hollywood’s fabled Sunset Strip since 1946, leaving a lamplight burning from the Tinseltown glamor set to big-haired glam rockers. A major renovation in 2007 restored the hotel to its former glitz and glory, so it comes as no surprise that the same attention would be paid to the recently opened Oliver’s Prime in the property’s northeast corner. The swanky digs would make Don Draper feel at home; the look and feel is 60’s modern with chrome, leather and simple colors and geometry. One executive-looking booth features photographic images of smoke, which would have been unnecessary in the tobacco culture of Kookie Kookson’s day. 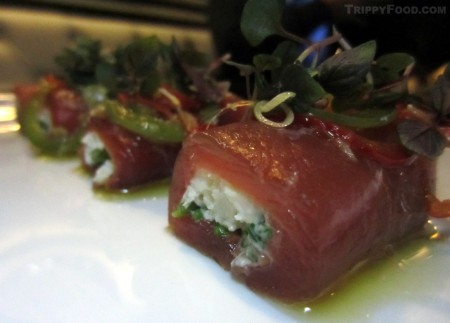 Fortunately, this is not a case of style over substance; Oliver’s Prime is serious steak house with innovative fare by Chef Greg Elkin, so innovative that even the menu illuminates when opened.  This is surf and turf at its finest, where fresh lobster meat finds its way into a caprese salad and a cavalcade of manly meat from sustainable ranches (such as Creekstone Farms and Durham Ranch) keep the carnivorous crowd happy. Even the side dishes are exceptional – the wild mushrooms and Shishito peppers are so good that you’ll spare the suggestion that they might accompany your choice cut (save that task for the subtle pearl onions with applewood-cured bacon). While kale is still hogging the limelight, the overlooked but not overcooked broccolini makes a tasty appearance here in a mildly spicy Thai dish that holds its own against the cattle. 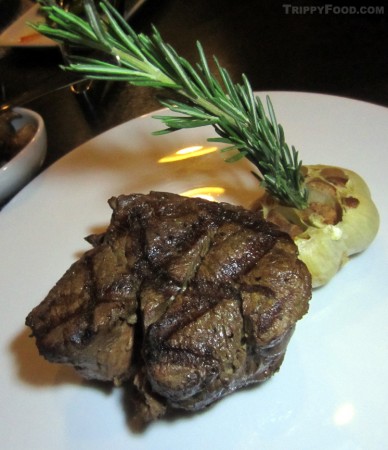 Don’t let the tuna rolls be miscast as nori-wrapped sushi – here fresh ahi envelops a creamy Dungeness crab center with sea beans and ginger yuzu aioli; the rolls disintegrate on the tongue effortlessly, leaving the zest from the jalapeno slices and lemongrass vinaigrette lingering after the bite is gone. The melty Wagyu tartare is a thing of beauty crowned with wispy honeycomb potato crisps, draped with arugula leaves and finished with shaved Pecorino and a quail egg. 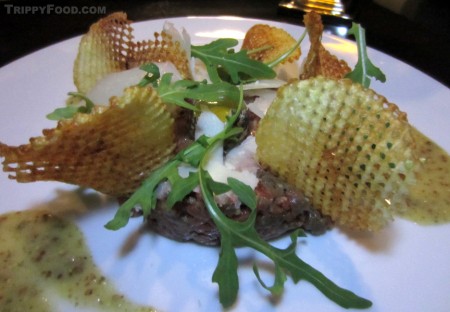 Mammal flesh is their forte, and there’s an abundance of it on the menu. The lamb chops are given a Middle Eastern treatment, cooked with dates, almonds and Eastern spices; tender filet of bison should be ordered on the rare side and eaten sans accoutrements to appreciate the exotic flavor – resist the urge to squeeze the roasted garlic onto the meat, as this is an exceptional cut spared the indignity of being ground for burgers. Also of exceptional note is the New York strip steak from Creekstone Farms, dry-aged in house for 35 days, a juicy and delectable slab of meat capable of satiating the most finicky carnivore. 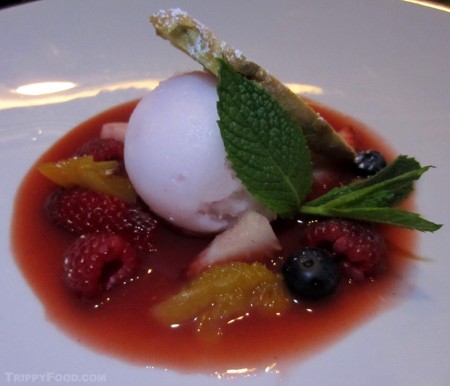 A refreshing strawberry soup with sorbet

The chilled strawberry soup with sorbet, berries, citrus and mint is refreshing and light enough to eat with the meal, but sweet enough to savor as a dessert, but a chocolate brownie sitting in a shallow pool of grapefruit can be a challenging pairing on the palate. Libations are plentiful, although the three-stool bar is a tiny station; however, The Grafton on Sunset is currently renovating its Bar 20, which will re-open as a full-service bar soon.

While the decor is a throwback to a time when the jet set dined exclusively in a posh, modernistic, playground to the stars, there’s no pretentiousness here – just remarkable cuisine in a fun and artistic setting that will have you anticipating the sequel.

GALLERY: See images from Val’s dinner at Oliver’s Prime at the Grafton on Sunset Strip in West Hollywood CA

NOTE: The cost for the food was provided by Oliver’s Prime. The content provided in this article was not influenced whatsoever by the organizer of the event.