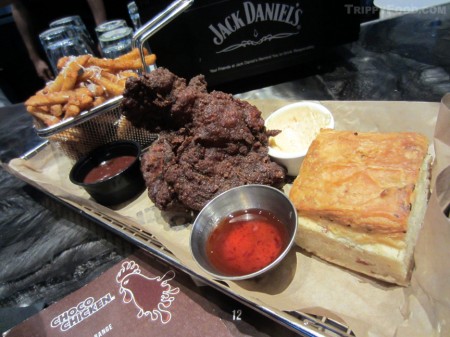 Ever since Hershey orchestrated pedestrian accidents involving chocolate and peanut butter, the mashups have been escalating in a no-holds-barred free-for-all that have made the Luther Burger, Dominique Ansel’s Cronut™, Keizo Shimamoto’s Ramen Burger™, and KFC’s Double Down® household words and cash cows. Whereas most of these Frankendishes have originated on the East Coast, Los Angeles is making brown renowned downtown with the birth of the latest engineered melds of great tastes that taste great together, Choco Chicken. Southern California restaurant impresario Adam Fleischman has partnered with Keith Previte and brainchild Sean Robins (who imagined the not-so-farfetched idea of chocolate and chicken together after an undecided craving for mole and fried chicken). 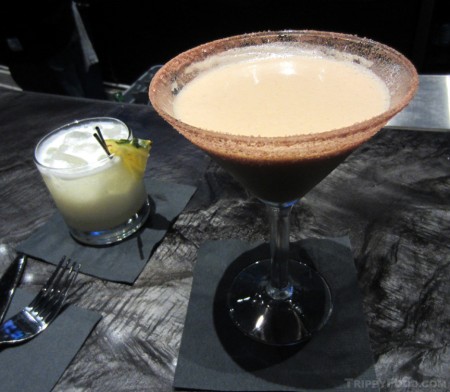 The Choco Chocolate Martini with its little brother, Choco Colada

While their brown, gooey logo features a brown yard bird head (and no, that cut is not on the menu), Sonny the Cuckoo Bird is not the only menu item that gets the chocolate treatment. Most of Choco Chicken’s libations are treated with a liberal application of chocolate; while The Angry Cock deserves a try simply on name alone (deriving its name from the inclusion of Fighting Cock Bourbon blended with White Crème de Cacao cordial), the drink of choice is the Choco Chocolate Martini. Don’t be chicken; this rich concoction is like Yoo-hoo for adults – Godiva milk chocolate, vanilla, and dark chocolate give the drink its comfortable Hershey juice box flavor, while a shot of espresso mochanizes it. The drink gets its kick from Grey Goose vodka and Frangelico, creating a beverage that is perfect with fried chicken but could be drunk for dessert by itself.  For the daring teetotaler, they’ll be happy to reach under the bar and grab you an ice-cold Chocolate-Covered Maple Smoked Bacon Soda from Real Soda, but I’d recommend adding a shot of mescal to help it go down. 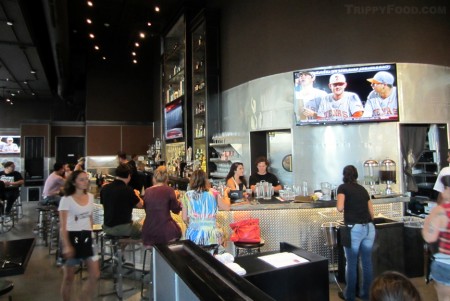 Many of the menu items are still in the experimental stage – a Choco Chicken meatball sandwich was dropped after a posthumous “what the hell were we thinking” session. Currently, traditional-style fried chicken is the du jour star of the menu – each cut of the Jidori chicken is brined for days and then coated with a recipe that has more Homeland Security on it than the Colonel’s 11 herbs and spices; suffice it to say that a hefty portion of the ingredients include Coco Suisse cocoa powder. The dry coating gives the hint of mole, but is a whole different animal – texturally, this is fried chicken at its finest (although not particularly crispy). The deep brown color initially gives the impression that the chicken was left in the Frialator a bit too long, but the first bite allays that concern. 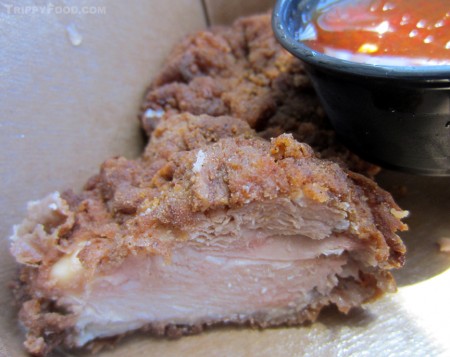 Apparently wings haven’t worked out – dishes include thighs, breasts, “drumettes” or combinations thereof with inventive sides such as mashed potatoes laced with gobs of white chocolate, cocoa-dusted Parmesan spicy fries, or an outstanding caramelized bacon-laden biscuit made in-house. Hell, even the vegetables get the chocolate treatment – nibbles from a cup of crudité reveal a distinctive chocolate-spice dusting. Most of the dishes are accompanied by dipping sauces made on the premises including chocolate ketchup that hints at sweet barbecue sauce, and The Bee Sting, a sweet dip made with honey and habanero. Rest assured that the takeout passes the frat house next-day fridge feast test with flying colors; it’s just as good cold, although the texture changes as would be expected. 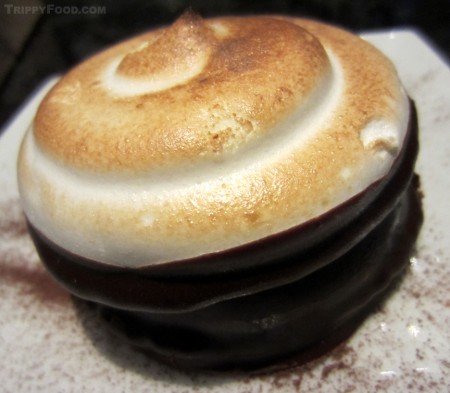 Obviously chocolate makes an appearance on the dessert menu – you can go old school with a chocolaty ice cream from L.A. Creamery or succumb to the indulgence of the Electric Chocolate S’mores, a decadent moon pie from Cake Monkey Bakery topped with a cocoa-dusted meringue. The former Corkbar location on a corner not far from the Staples Center doesn’t beckon with flashy neon and lights, so it may take a bit for people to discover this unique gem, but once you get your first taste and realize that the flavor transcends the novelty, you’ll be cuckoo for Choco Chicken.

NOTE: The cost for the food was provided by Choco Chicken. The content provided in this article was not influenced whatsoever by the organizer of the event.