Of Uncles and Ants

One of the cigar and liquor stores in Bogotá selling hormigas

Colombia, South America is truly an amazing country with a wide variety of hearty foods and delicacies. What has to rank at the top of the country’s most unusual cuisine are hormigas culonas. The Spanish name literally translates to “big-butt ants”, which as it turns out is a very accurate description. I had been to Colombia several times, but unfortunately not at the time of year when they are harvested, roasted and snacked on. On my last visit to Bogotá at the beginning of April, I was told by my wife Claudia’s uncle that the ants were in season and I stood a good chance of getting them while I was there. The reason these treats are seasonal is because only the winged females are harvested as they leave the nest to start their own colony, and event that takes place for a few weeks in the spring. The ants are harvested in the rural areas of Santander department (Colombian “departments” are the equivalent of American states), processed in larger cities such as Bucaramanga, then shipped and sold. I was anticipating having to visit a Colombian restaurant and ask if they have ants, expecting an argument about how clean their establishment is, but they are actually sold packaged in cigar and liquor stores. 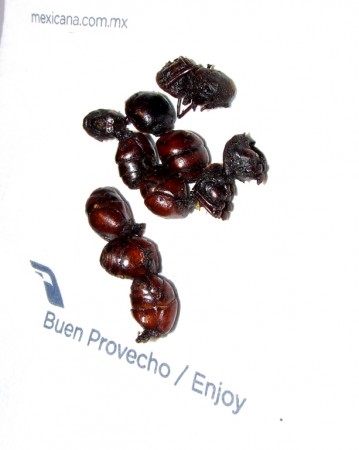 Ants on a plane - Enjoy!

My brother-in-law told me of a place near the Plaza de Toros Santamaria (Bogotá’s bullfighting ring) where he had seen them advertised, but it was questionable when we would be able to get over to that part of the city. While being driven back to our hotel (I prefer not to drive there, which gives me an opportunity to bury my face in my hands and scream) I saw a handwritten banner draped across the top of a cigarreria that read “HORMIGAS” in huge letters. I asked the driver to stop so that I could go ant shopping, and brought Claudia with me for translation purposes. In my best Spanish (which isn’t that great), I asked, “¿Tiene hormigas?” and was presented with the small, medium and large bag. I felt that if I really liked them, the small bag would be inadequate; consequently, having a large bag of nasty-tasting insects would not be a wise investment – I opted for the medium bag (at about $15 US). The clear plastic bag was stapled shut with no markings on it, and the contents looked like raisins or very dark shelled peanuts. I decided to wait until I returned to the U.S. to try them and so in my backpack they went. 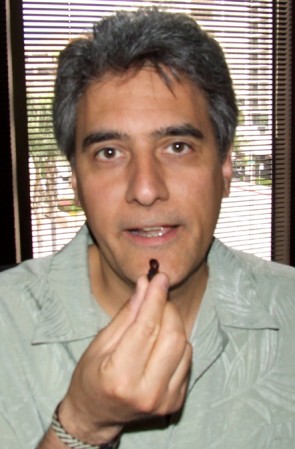 Not very daring - this was probably my 60th ant

As my return flight got closer to LAX, I wondered how these would be treated at customs. They weren’t alive, and they certainly weren’t meat or plants, but not being sure, I decided to try some in the event that I would have to forfeit them. I opened the bag and smelled them first – they gave off a woodsy, meaty aroma. I studied them closely and noticed that the ones that were still in one piece were big, about an inch long. The wings had been removed but the little legs and head were still attached, and so I popped a single ant in my mouth. The taste was unlike anything I had imagined – it actually had the flavor and texture of bacon-flavored popcorn with just the right amount of salt. I’ve heard others say they tasted like Spanish peanuts, but I didn’t get that at all – just a light, crunchy, meaty taste.  I wondered if the bacony flavor was a result of being roasted in pork fat, but with no ingredients listed, it was anybody’s guess. I could easily see watching fútbol while enjoying a cold Aguila and a crispy bowl of hormigas (if that’s how I rolled).

I enjoyed the taste so much that I ate a handful of them on the plane; since the little damsels still have their legs, flossing is highly recommended after consuming them in quantity. I debated how to present them at Customs in Los Angeles, but was hurriedly waved through without so much as a question – in fact I started to speak and the agent simply repeated, “Good night!!” Since finding a new tasty snack treat without being able to share it with others is unthinkable, I offered them to others I worked with. You could say the feedback after the initial shock of eating ants was anticlimactic. It just goes to show that you shouldn’t be antsy about trying insects, no matter how much the thought of it bugs you.

9 Responses to Of Uncles and Ants