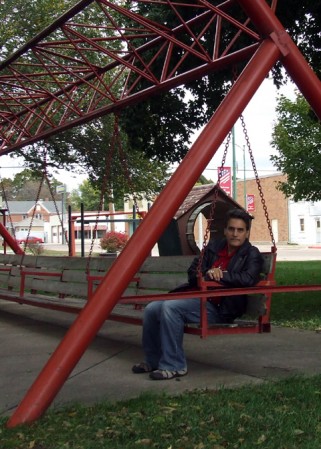 Hebron 4th of July Committee chairman Tim O’Callaghan had seen a 4-person swing in Kansas and had the brilliant idea to create one four times larger in Hebron. His intent was to have the swing ready for the 1985 Fourth of July celebration and so he asked Reinke Irrigation Company to design a 16-seater.  The swing was made from metal irrigation equipment parts, and at a cost of about $250 and with the assistance of about 50 people, the swing was erected in time for Independence Day. The swing holds 16 adults comfortably and allegedly up to 32 small children (or elves). In 1991 it was moved from its original location to the current one in Roosevelt Park. Apparently the record is a point of contention around Hebron – Guinness no longer has a category for the largest porch swing, but the point is moot since technically the swing no longer resides on a porch. When I arrived at the park there wasn’t another soul in sight, and I had to imagine 15 other people on the swing with me.

Easy to follow directions to the pride of Hebron

As long as I was in town, I decided to drive around a bit and check out the environs. At around 1 PM on a Saturday, there were only about 3 cars parked on Lincoln Avenue, the town’s main street. The street itself is fascinating – Lincoln Avenue and several of the cross streets are paved in red brick, once popular late in the 1800s and early in the 1900s. The brick makes for a slicker driving surface but eliminated the problem of sloshing through mud, neither one an issue on the beautiful sunny day. Only two buildings had some semblance of being historic, both across the street from each other on the corners of 4th Street and Lincoln Ave. Only one (the Brand X Saloon) appeared to be open, and there was little activity anywhere in town. The town center was once lined with historic buildings but a 1953 tornado devastated the town, destroying much of the older structures.

Thayer County Courthouse, a shadow of its former self

Farther up 4th Street was the only other point of interest, the Thayer County Courthouse.  The gray stone building with glass block windows was completed in 1902 after fire destroyed the previous structure. The building originally had a tall clock tower, spires on all four corners and a high peaked roof, but the top stories and tower were removed after sustaining irreparable damage in the 1953 tornado. The stone carvings over the entrance are alleged to have been the handiwork of Gutzon Borglum, the sculptor who created Mount Rushmore, but no one can present solid evidence to prove this.

I had bigger fish to fry and followed the red brick road back to US 81, satisfied that these had been 15 minutes well spent.

This entry was posted in Trippy Trips (On the road and overseas, things to see along the way), USA and tagged Brand X Saloon, Hebron, largest swing, Nebraska, Thayer County. Bookmark the permalink.