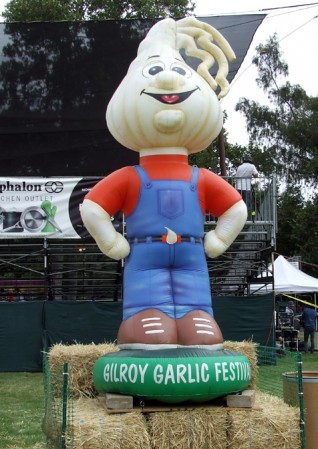 There are several urban legends about Gilroy, California: that you can smell the town before you get to it, and that you can marinate a steak simply by hanging it from a clothesline. Although neither of these is true, Gilroy is renowned for its claim of Garlic Capital of the World, and its annual Garlic Festival. Held the last weekend in July since 1978, the Gilroy Garlic Festival is the brainchild of Dr. Rudy Malone, president of Gavilan College. After hearing about a French festival that drew 80,000 people, Dr. Malone was determined to wrest the title away from the French and bring it to Gilroy, nestled in the green hills of southern Santa Clara County in California. Although they are not the world’s leading producer of garlic, they are probably the most famous, presumably because of the Garlic Festival. 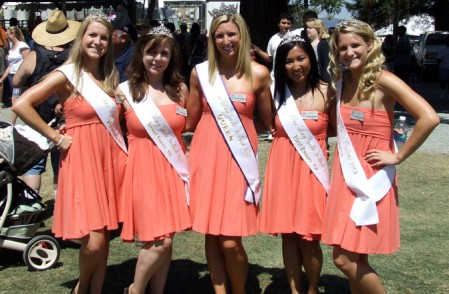 Should your love of all things garlic convince you to attend the festival, keep in mind that it draws in people from all over the world – it is best to get there early, and when I say early, I mean when the gates open. Local hotels sell out fast, but the drive into Gilroy is picturesque farmland and wild scrub, and not far from the rugged California coast making the journey worth the destination. Admission to the festival is currently around $12, worthwhile just for the sights, sounds and smells. Don’t worry too much about following directions to Christmas Hill Park, for as soon as you get into Gilroy you will hit traffic being diverted to festival parking. The entrance is a short walk from the parking area, but as soon as you arrive you are hit with the smell of food being broiled, fried and otherwise cooked with varying degrees of garlicness.

My advice to you is to hit the garlic ice cream booth first. Trust me on this, by noon the line wends its way across the park and they have been known to run out. There are several booths featuring garlic ice cream, but only one that hands out free garlic ice cream in tiny cones. For some, this is the main draw to the festival – you can get garlic ice cream year round at The Stinking Rose restaurant in either Beverly Hills or North Beach in San Francisco for about $7 bucks, but spend the extra $5 for the Garlic Festival and enjoy the other festivities as well. For you vampires that the mention of garlic ice cream strikes fear into your hearts, fear not – it is truly delicious and worthy of being called dessert. As you bring the soft-serve delight up to your mouth, you get the slight aroma of garlic, but it is not overwhelming. The first bite (or lick) is creamy, smooth and sweet, and after about a minute the light flavor of garlic creeps in, but blends so well with the sweetness that you can’t help finishing it and going back for another. 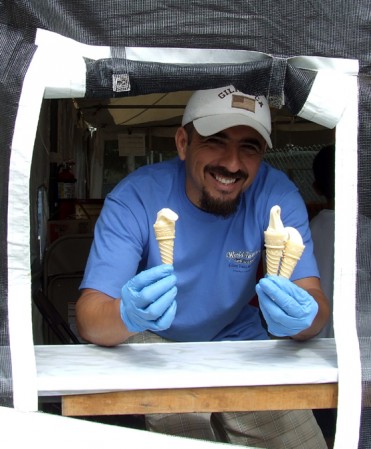 At the most popular booth, small samples of garlic ice cream are free

Two large centrally located areas of the event are dedicated to vendors’ tents, selling a variety of cooking items and garlic-themed products. Christopher Ranch (one of the biggest sponsors) sells fresh garlic from their booth, and at 25 cents per bulb, you’d be wise to stock up.  At three different stages, live bands perform all day and into the evening; the festival also hires roving performers such as ragtime bands, barbershop quartets, accordion players and other acts worthy of an outdoor festival. The festival historically has been a fundraising event, and a big, metal garlic bulb shoots flame from its top and displays how much money has been raised for charity.

In a small area surrounded by bleachers, chefs challenge each other with garlic-themed cuisine at the Garlic Showdown. The audience gets to watch the teams prepare the food while an MC gives the play by play. Unfortunately the cuisine is judged by a panel, which gets to taste the entries leaving nothing for the spectators. At several other tents with smaller bleachers, chefs perform live cooking demonstrations with liberal amounts of garlic that the small crowds do get to devour with great gusto. Running through the center of the festival is Gourmet Alley – a variety of food is prepared inside a huge tent, with specific items available from booths on either side. At the south end, the Pryo Chefs prepare the food in a manner that is as much about performance as skill. These chefs don’t get the moniker “Pyro Chef” for nothing – their “flameouts” are truly a spectacle to behold, cooking the food over a ball of flame that looks like a small nuclear detonation. Gourmet Alley serves up standard garlic fare such as garlic sausage, chicken and shrimp scampi, stuffed and marinated mushrooms, calamari and garlic bread. For the more adventurous, vendors on the outskirts serve up delicacies such as garlic corn on the cob, popcorn, oysters, crawfish, French fries, alligator, venison, frog legs and tacos. I opted for one from Column A and one from Column B; the garlic stuffed mushrooms from Gourmet Alley were broiled to perfection, being cooked through yet still having “pop” and rich, garlic flavor. The alligator tail chunks from one of the vendors were marinated in garlic, lightly breaded, skewered and fried. They were crisp, slightly chewy and thoroughly delicious. Although many who try alligator state that it “tastes like chicken”, I find the taste and texture closer to veal. 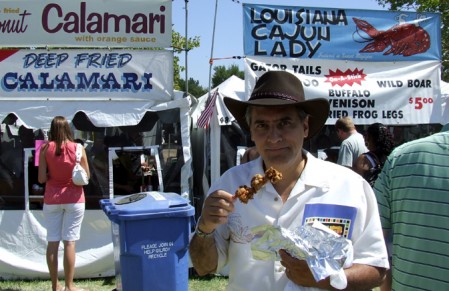 Garlic-marinated alligator on a stick - yum!

After leaving the festival I thought I would check out downtown Gilroy. Monterey Street runs through downtown, but sadly many of the historic structures remain abandoned, some condemned. Many of the Victorian-era homes on the side streets have been beautifully restored, but downtown is in need of rescue. Some of this is in progress – the beautiful 1905 old City Hall building has neared completion of its renovation and will soon host an Asian fusion restaurant, maybe not a fitting fate, but welcome if it keeps the history alive. I stopped off at the house of a cousin who was grilling in the back yard, and said, “I wish I had some garlic!” One of the bulbs from the festival provided the perfect kick for grilled oysters by the pool.

I highly recommend the Gilroy Garlic Festival for the atmosphere (which will have the distinctive aroma of garlic.) Just make sure you bring someone willing to kiss you afterwards!