O What A Glorious Sicht 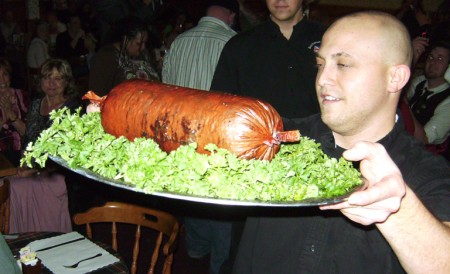 The guest of honor - the haggis

Few events celebrate both a famous poet and a national dish quite like the Scottish celebration that is the Burns Supper. The event is traditionally held on the birthday of “Scotland’s favorite son” and national poet, Robert Burns. Burns was born on January 25 in 1759 and on that night it is not uncommon throughout Scotland and other parts of the United Kingdom to gather to memorialize not only Burns, but also haggis, the national dish of Scotland he made famous. The annual Burns Supper generally follows a particular structure, with the dish immortalized in Burns’ “Address to a Haggis” being the guest of honor. A true Scotsman would either be touched by Burbank’s Buchanan Arms holding a Burns Supper, or recoil in horror of having Americans give it a go for olde Rabbie Burns. 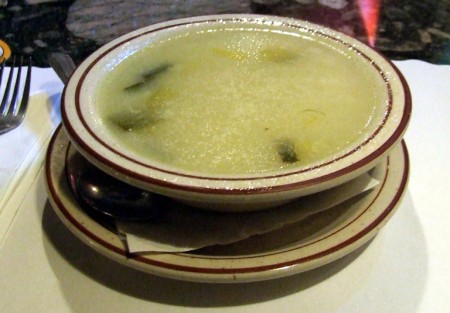 The event appeared to be advertised primarily by word of mouth – it was nearly impossible to get in. Buchanan Arms have been staging the event for years, and the proprietor mentioned that they get the same people in attendance year after year. It was difficult finding a Scottish accent in the place, but many of the men in attendance favored a kilt over pants. Friend and fellow blogger Eddie Lin wondered if a Catholic school uniform skirt could pass for a kilt, but I believe it would only give the impression that one was planning a night out in San Francisco’s Castro District. I opted for a green plaid scarf, hoping I wasn’t going to start a brawl for wearing a tartan pattern from a disgraced clan, figuring I could excuse my ignorance by stating I was cold. The event was standing room only, and I had negotiated seats at the bar, which actually gave me a good vantage point for the festivities. Traditionally a grace is given (usually the Selkirk Grace), but at this shindig the food was served without fanfare. The meal started with either a salad or cocky leeky soup. There was no way I was about to turn down a dish with a name like that, so I requested the soup. Cocky leeky (alternately cocka-a-leekie) is a simple soup made with chicken, leeks and rice. The rice was cooked down to a porridge-like consistency, which made it hard to identify, but the soup was flavorful and satisfying. 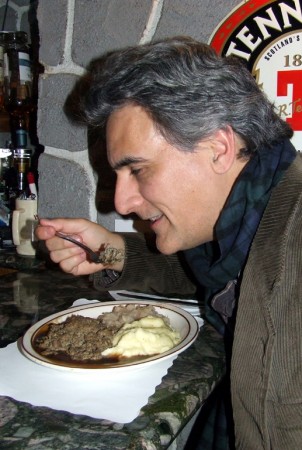 My second go at haggis

For the main course, guests could choose from five options: fish and chips, chicken, bangers and mash, roast supper with Yorkshire pudding or haggis. Being a party in celebration of said haggis, this was my obvious choice, although Claudia selected the fish and chips. She stated that it held up to the standard of what she had in England, but I noticed it was served with whole peas rather than mushy peas (which she preferred since she likened mushy peas to baby food). At a true Burns Supper, the haggis is served as the main course after the address, but since everyone else was eating, I wasn’t complaining. The haggis was served in traditional style, with tatties and neeps (mashed potato and parsnips respectively). It was quite a departure from the store-bought haggis I wrote about in a previous blog article – since haggis still cannot be imported into the United States, Buchanan Arms made their own from sheep offal and cooked it in a synthetic substitute for the lamb stomach. The taste was remarkably different than Macweens – the sheep parts outnumbered the oats, imparting a very strong, earthy flavor with less of the sweetness. Claudia compared her small bite to a cross between ground beef and liver. The strong taste was cut considerably when mixing forkfuls with the potatoes and turnips, but the trio perfectly complemented each other.

After the plates were cleared away, the pomp and circumstance began (actually “Scotland the Brave”) as a bagpiper lead the procession in true form, a massive two foot-long haggis on a silver tray taking up the rear (wow, that sounds wrong). The mini-parade wound its way through the pub to the stage, where the thick-brogued Moira Stewart addressed the haggis to a hushed crowd. In dramatic fashion, she read Burns’ “Address to a Haggis” aloud, slicing the behemoth open on queue like a Scottish Jason Vorhees. The traditional toast of Scotch whiskey followed the address; for the toast I had the barkeep supply me with a wee dram of Glenmoranie Original (which she “guessed” was 12 years old). She initially suggested Crown Royal, but it didn’t have the appropriate ring to it. Dessert (trifle) was brought out; there are an endless variety of ingredients and methods to make it. Buchanan Arms had prepared theirs with Jell-O, blancmange and some sort of crumbly cake, topped with whipped cream and a cherry. It was every bit as sweet as it sounds. The band (The Ploughboys) continued to play Irish and Scottish songs for the remainder of the evening until the revelers began to filter out.

I believe you should accept every opportunity to try a new dish coinciding with a celebration, and a Burns Supper is a good way to do both and participate in age-old tradition at the same time. Just don’t do imitations of Star Trek’s Scotty or you’re likely to end up in the haggis.

Val attends a Burns Supper and enjoys haggis after the address:

The Address to the Haggis:

4 Responses to O What A Glorious Sicht