It is difficult to miss the Olive Festival entrance

It’s hard to imagine a festival centered on the humble olive, but since 2004, the city of El Paso del Robles, California has taken celebrating the Middle Eastern fruit tree to extravaganza status. The inhabitants of the town (generally referred to simply as Paso Robles) needed something to help them recover from a devastating magnitude 6.6 earthquake that struck on December 22, 2003. The quake destroyed a historic clock tower and the Mastagni Building, as well as creating serious damage to other structures including the 1908 Carnegie Library building in City Park. The clock tower was rebuilt, the library restored and the park was selected as the site of the Olive Festival. The festival increases in popularity each year – the region has the perfect climate for growing olives and grapes, resulting in the participation of a slew of olive orchards and vineyards. You would think the festival would focus on selling jars of little green olives with their tiny pimento turtle heads sticking out, and you would be partially right, but it is dedicated to all things olive. 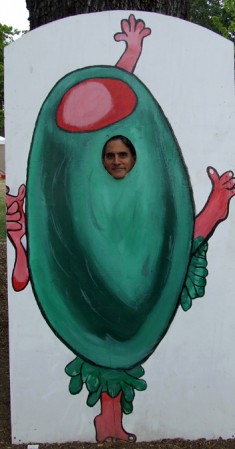 As with other festivals, live music is provided – in 2009, the Big Rock Balalaikas Band provided traditional Baltic music on instruments that looked like they were built by a professor of geometry with impossibly triangular bodies. The park’s paved walkways extend out in an “X” from the center where the Carnegie Library building (now housing the Paso de Robles Area Historical Society) is located; each is lined with tents selling everything from custom-blended olive oil to olive tree saplings. Experiencing the art of sampling olive oil is akin to attending a wine tasting – at some booths dishes holding a shallow pool of oil are soaked up with little chunks of fresh bread, while others provided tiny sample cups for “olive oil shots”. Tasting a tiny cup of olive oil takes some getting used to, and there was only so much I could drink before getting greased. At the Lucero tent, little metal kegs sat on a table that allowed sampling from the spigot, and for users to fill up bottles on their own. In addition to oil made from different varieties on olives, there were also blends of olive oil with other flavorings including orange, rosemary, red apple and lemon, and flavored balsamic vinegar. Naturally olives were available, canned with spices, stuffed with garlic, almonds, jalapenos, feta cheese – the sky’s the limit. One vendor was selling something given the curious title of “Frog Balls”, which was neither – they were dill pickled Brussels sprouts. 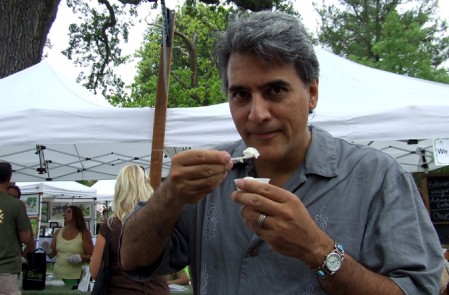 The gazebo featured an Open Olive Dish Cooking Contest, which sadly (like many of the other food-oriented festivals) has a panel of official judges, meaning that the general public doesn’t get to enjoy the olive-based creations. For those willing to purchase culinary delights prepared with olives, one of the paths was dubbed “Culinary Row”. Many of the vendors are local restaurateurs, and they are allowed to sell food provided they adapt their recipes to include olives. I opted for homemade tamales from Garcia’s Tamales, locally made and sold out of a trailer. They were steamed to perfection with the perfect amount of black olives (added specifically for the festival) and just the right amount of spiciness. Maybe the psychological effect of buying food out of a van and eating it outdoors was at work, but either way it was my win. At five dollars for two tamales, it was the best food deal at the festival. For dessert the only logical choice was at the WeOlive.com booth – they were serving olive oil ice cream created by Doc Burnstein’s Ice Cream Lab in Arroyo Grande. The ice cream was free, eliminating the economic risk factor of trying it and not liking it. As far as the taste was concerned, it didn’t have the overpowering essence of olives – in fact, all the olive oil appeared to offer was an oily sensation to the rather plain tasting ice cream. It was sweet, creamy and oily – a strange consistency but not an unusual flavor.

Though the Olive Festival is small in comparison to the Gilroy Garlic Festival, there’s still enough to hold the interest and taste buds of olive lovers, and there’s no beating the free admission. It’s a celebration, a party – an army of olives looking for the right martini.