Give A Man A Fish And He’ll Make Sushi… 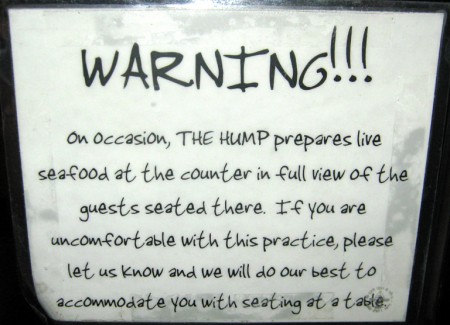 If seeing dinner alive bothers you, this sign is for you

Before we get started, any of you shrimp boat captains who down a few California rolls and beat your chest in sushi-eating triumph are going to want to sit down for this one. Don’t get me wrong, I occasionally like cucumbers and avocados wrapped in rice with canned tuna, but there’s a plethora of gastronomic wonders out there that are as much a presentation extravaganza as they are an explosion of taste. As with anything else, I’ll start you out easy.

It’s no secret that for years I shied away from sea urchin roe (uni, to you sushi aficionados). They say your first time is always the best, but trying uni in a restaurant in Southfield, Michigan is the quickest way to prove that adage wrong. The best bet is to try it near the coast, or at least in a restaurant where they take them out of the tank and open them up prior to eating. The roe (egg sacs/ovaries) are the desirable parts of the urchin (an animal that looks like a highly inedible pin cushion). Since my horrific Michigan experience I have had uni on several occasions at restaurants in the Southern California area and have fallen in love with the cool, creamy and slightly salty sea paste. Uni is fun to work with since its bright orange color makes it almost ornamental; it is mostly served sitting atop a rice and seaweed disk. We’ll come back to uni in an over-the-top presentation in a bit. 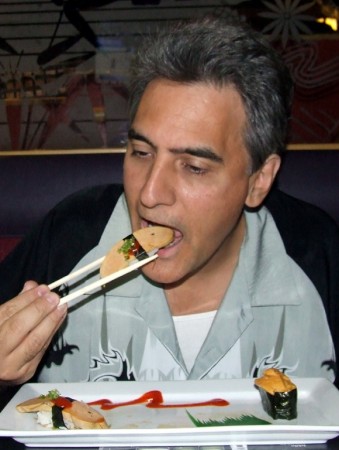 What’s that? “OK, Val, sounds interesting but we want the hard core stuff”. Well so do I, and that’s why I couldn’t pass up the offer to join friend, blogger, author and radio personality Eddie Lin for a visit to one of southern California’s meccas of sushi, The Hump in Santa Monica. Recently The Hump has been in the national news for being caught in a sting operation by the crew who filmed the Oscar-winning documentary, “The Cove”; they had sold sei whale meat to patrons with hidden cameras. The restaurant has decided to voluntarily and permanently close their doors after the incident, meaning that you’ll have to go elsewhere to enjoy the sushi extravaganza I am about to describe. And before you ask, no. I did not eat, nor was I offered whale during the feast.  Chef Kiyoshiro Yamamoto pulled out all the stops – the first course was a work of art. A Japanese cucumber was skinned and then cut into thin long and narrow strips. On the flat surface, Chef  Yamamoto added some orange rind, black truffle and honey, which was daubed onto the cuke with a king bee that was doing the dead-man’s float in the jar. Once rolled, Japanese uni was placed on top, along with some slivers of truffle, a tiny cooked shrimp and a dusting of gold flakes. An individual piece was served on a dish that looked like stone – the preparation and presentation was incredible. I didn’t know if I should eat it or put it in a glass case, but eat it I did, an explosion of flavors and textures doing a ballet in my mouth. I was ready to go home and never eat again, when the second course was presented. 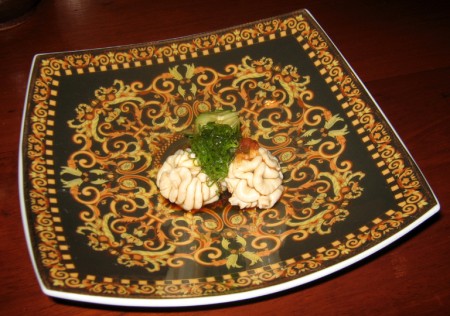 For round 2, a pair of cod shiraco were braised and presented on an ornamental plate, adorned with some shaved green onion and several dipping sauces. The initial reaction to looking at the shiraco was to wonder – is that the fish’s brain? Well, being that these are from a male fish it is from the part that does the thinking in the spring time; shiraco is the Japanese name for the cod’s sperm sac. I’ve eaten Rocky Mountain Oysters, lamb fries and chicken nuts, but this was one for the books. The shiraco were actually quite tasty, with a nutty (oops, how did that slip in) and protein-rich taste not unlike a knockwurst.

Round 3 looked like the one with the T.K.O. – Chef  Yamamoto prepared live lobster sashimi. There are no words descriptive enough to put you in the orchestra seats for this one but I’ll give it my best shot. With deft knife work, he quickly dispatched the aquatic spider, neatly severing the tail from the body. He worked quickly, opening the tail and removing the meat. Some pieces were left in big chunks, while other pieces were chopped fine and combined with soy sauce and other ingredients to make a topping. On top of the raw lobster meat, uni was added, along with more truffles and gold disco glitter. The tail was presented on a tray with unusual tempura vegetables (including fiddleheads) and in the middle – the front end of the still-moving lobster. It was a little unsettling, like eating chicken drumsticks while the bird’s live torso is looking at you, but the lobster was indeed dead. Its complex nervous system caused it to continue to move after its demise. While eating the sweet lobster sashimi, the torso was whisked away to prepare a miso soup that was brought out afterwards. 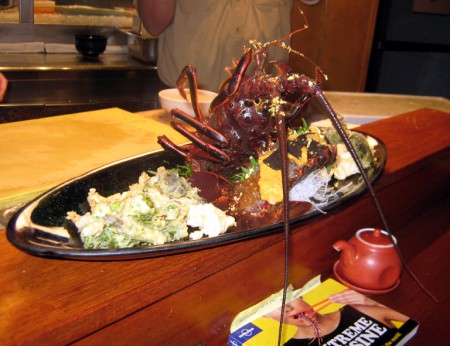 Lobster sashimi is served while the lobster watches

Stop the presses, because the champ pulled out a stunning 1-2 punch for the finale. A live, wriggling eel was placed on the counter, and Chef Yamamoto crowned him with a spike right through his head… right through his head (sorry Mick). The fish died instantly, but someone forgot to tell him that. After its head was severed, a sharp knife neatly butterflied the fish length wise. With a quick hand, Chef  Yamamoto removed all the internal organs, yet the eel continued to wriggle. The spine was removed completely and I witnessed something that to this day continues to inspire awe – the spine was still moving. The eel was lightly fried, and the spine was fried so that the small brittle bones made a tasty, crunchy snack.

It would trivialize the event to simply say I went out for sushi. The presentation, the arrangement, the art of preparation all made for a spectacular evening that culminated in a delicious and exotic meal. I think I can now explain that dream about falling asleep on the beach and hearing knives being sharpened.

NOTE: This meal was part of a promotional event