There’s A Fungus Among Us 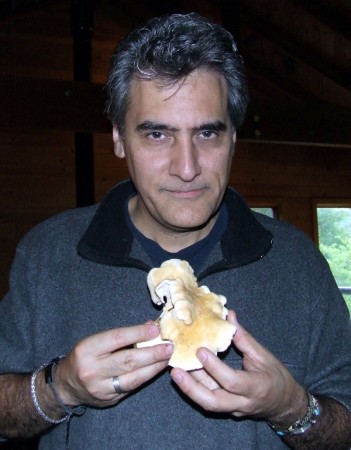 This is a nice example of the sweet tooth (mushroom, not me)

There are a variety of reasons mushrooms aren’t universally prized for their incredible flavor – for starters, commercially grown mushrooms are generally cultivated in soil rich in animal manure (and no, they don’t “taste like crap”, although I don’t have a point of reference). There are those who turn their nose up at mushrooms based on their lower class family members (molds and fungus), and the understandable fear of psychotic reactions, illness or death from toxic mushrooms. Mushrooms have been harvested, cultivated and eaten for millennia and harvesting them in the wild can be a delicious adventure. That having been said, I would caution (with big, bold, red letters) to only do this with someone who knows what they’re doing. Nothing ruins a meal of sweet, delicious mushrooms more that vomiting and paralysis.

On a recent trip to northern California, we took a trip to the coastal county of Mendocino to visit a family friend who has a beautiful cabin up in the woods. The house is surrounded by cool, damp forest, which Robert informed us is the perfect climate for wild ‘shrooms. When he suggested a nice walk through the woods, coupled with a mushroom harvest, I was immediately onboard. He gave us a general idea of what to look for, but we always deferred back to his judgment call before collecting any. As it turns out, the most beautiful ones are the ones to watch out for – after awhile it was easy to identify different types along the trails – black trumpets, sweet tooth, coral, pig’s ear, etc. If there were any that Robert wasn’t sure of, we wisely passed them by regardless of their taste potential or lack of toxicity. 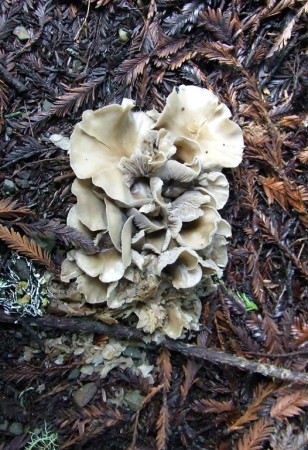 We came back to the cabin with a considerable amount of black trumpets and sweet tooth mushrooms and decided to cook up some of the black trumpets. Robert sautéed them in a little butter and garlic and presented the hot plate of mushrooms on the table, which we savored bite by delicious bite. The black trumpets gave of a slightly earthy, pungent flavor, but were also quite sweet. The texture was different that biting into the white button caps found at the local Stop & Shop – they were firm, yet delicate, requiring very little chewing, and each bite released more of the wild flavor. 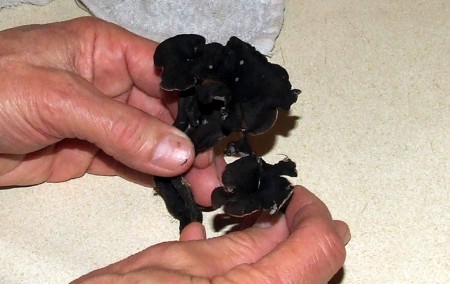 Black trumpets prior to cooking

There are a plethora of edible varieties of mushrooms, and not all are grown worldwide. Before deciding to forage for your own, it isn’t enough to look at pictures and go for “close enough” – be sure to take an expert along, or at least have them identify them before you eat them. Also keep in mind that even though there are many edible species, some have a short shelf life, require special preparation, or don’t taste very good once they’ve gotten “old”. Trust me, you wouldn’t want me to keep you in the dark and feed you a load of bulls**t.

8 Responses to There’s A Fungus Among Us