The Bird’s The Word 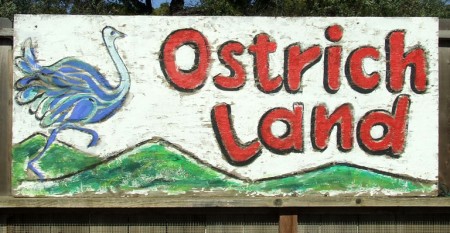 The ostrich is a laughable bird, with wings too weak to lift its body and a light-bulb shaped head on the end of a fuzzy snake of a neck. Of course should you choose to laugh at it, you run the risk of getting kicked into tomorrow. Although they are the world’s largest bird, they generally prefer to avoid confrontation. They can run about 45 miles per hour and will lay down flat to avoid detection (contrary to popular belief, they do not bury their heads in the sand to hide). It’s hard to imagine that an animal this size would need to worry about predators, but the maned cats in their native Africa could make a bucket of Original Recipe out of one in short order. It is for this reason that the ostrich has been armed with a deadly clawed-toe Kung Fu kick. They also have mankind to worry about, having been hunted and farmed for feathers, hides, oil, eggs and meat for centuries, if not millennia. 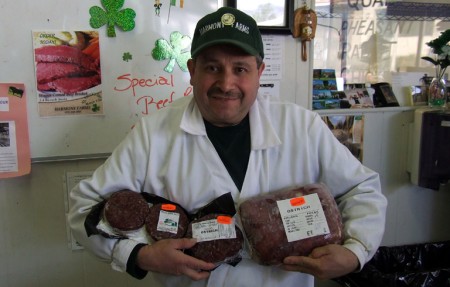 Ostrich farms were lucrative businesses, but towards the end of the 1900s the cost of raising them led some farmers to simply let them go; it was not unusual to hear of a hunter in Texas running into one face to face. One ostrich farm that has managed to keep in business for the past 20 years by introducing their livestock to tourists is Ostrich Land in Buellton, California. You may have seen some of their ostriches in the film “Sideways” but you don’t need a Hollywood camera crew to see them up close. Ostrich Land has a small gift shop that sells eggs (yes, they make great omelets), feathers, oil and other ostrich products. They do have some meat for sale, but they maintain that it comes from a nearby ranch. For 5 dollars, you can go out back and get a large dog food bowl attached to a metal dustpan filled with what looks like rabbit pellets to feed the birds (ostriches as well as their diminutive cousin, the emu). The ostriches saunter up to a railed platform and jam their heads in the bowl like a feathered cobra, emptying the bowl in a few minutes. The two-handed death grip is recommended as they will steal the whole contraption given half a chance. Oh, by the way, important safety tip – keep your face well out of their reach. Sure, ostrich feeding is fun until someone loses an eye. 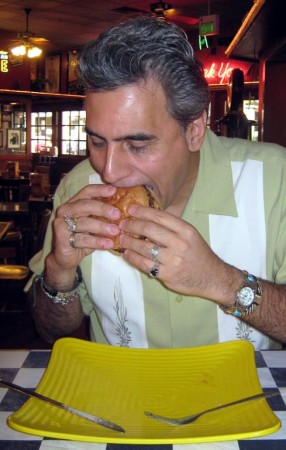 Nothing but meat and bun, my friends

If all this ostrich talk is making you hungry, fear not – ostrich is lean, high in protein and makes a delicious alternative to beef (that’s right, it tastes like cow, not chicken). Ostrich appears frequently on the menu worldwide – I found a place that features ostrich steak prominently on their menu in the hills overlooking Bogotá, Colombia. You don’t have to look far – at many (if not all) Fuddruckers, you can order their ostrich burger for a few dollars more than the hamburgers, and take my word for it, they are thick, juicy and delicious. There is a slight pungent taste that helps differentiate it from a beef burger, but it is far superior to the hamburgers available in most fast food stops and burger joints. If you’re thinking of getting exotic with the family dinner, many large and specialty grocery stores carry the meat (mostly in ground form for burgers or chili). One of my favorite meat markets in La Crescenta, California (Harmony Farms) carries not only ground ostrich and ostrich patties, but “ostrich mignon” as well as ostrich roast. Manager Sonny Cabrales will answer questions you have about which cuts work best, etc., as well as helping you find other game as well (they’re well stocked with bison, kangaroo, alligator, elk, antelope, boar, frog legs – hell, they have turducken).

The next time you’re in the mood for red meat but want to walk on the wild side, try ostrich. More than just an alternative protein source, ostriches can be fun, and if you don’t believe me, check out the Ostrich Festival in Chandler, Arizona, where the high point of the event is the ostrich races. With human riders. No kidding. Bird, bird, bird, bird, bird’s the word!

12 Responses to The Bird’s The Word