Even Artichokes Have Hearts 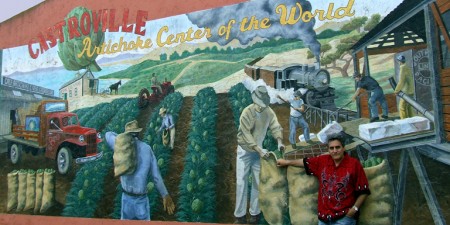 Everything is bigger in Castroville

The artichoke is a confusing vegetable; Curly Howard once threatened, “I’d like to meet the guy who invented this barbed-wire pineapple”. The Globe artichoke we’re familiar with in the U.S. is a native of northern Africa and southern Europe, and is actually the unopened bud of the Cynara cardunculus (a member of the thistle family). It is a heavily armored flower with thick, broad, scale-like petals ending in thorns; these guard the purple, fuzzy part of the flower that in its immature stage is referred aptly as the “choke” (describing what will result if you try to eat it). One can only imagine the brave soul who first assumed that they were edible, and then figured out how to eat it – it’s highly likely that he collaborated with the first person to eat a lobster. Artichokes have been known in popular culture for millennia; as the story goes, the Greek god Zeus seduced a young mortal maiden named Cynara and brought her back to his swinging pad in Mount Olympus. Living the life of a goddess didn’t appeal to her, so she left Mount Olympus, much to the displeasure of Zeus (who quickly and neatly turned her into the first artichoke, thus the vegetable’s scientific name). Cute story, to be sure, but with all this European folklore surrounding the armadillo of the vegetable world, how does a California town on the Central Coast come to be known as “The Artichoke Center of The World”? 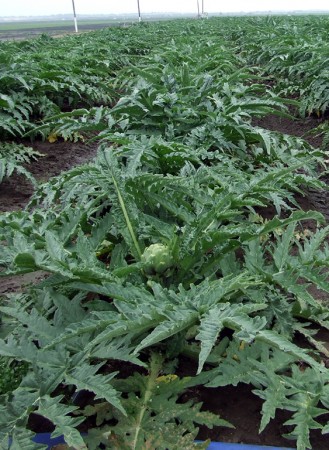 An artichoke in the field

Around the beginning of the last century, Italian immigrants in the San Francisco area were missing their beloved artichoke when they discovered that the climate caused by the meeting of the warm inland air and the cold waters created the perfect growing climate. Root stalks were imported from Italy and farmers on the peninsula began growing artichokes like crazy; however, when land development became a lucrative business in the Bay area, farmers began moving their crops to the south, settling in the undeveloped Castroville area in the early 1920s. The crop was wildly successful and to this day over 98 percent of the artichokes consumed in the U.S. come from the Castroville area. Mediterranean countries grow more artichokes, but Castroville gets to wear the crown because more artichokes are grown in this area than in any other single place in the world. By the 1940s, Castroville became so synonymous with artichokes that the idea of an annual festival became reality. In 1947, a young Norma Jean Baker (yes, THAT Norma Jean Baker) was crowned as the first Miss California Artichoke Queen and the tradition has been upheld ever since. Lately the contest bestows multiple crowns (political correctness has led to the monarchy being shared by a queen and a king); the contestants are local area students who are voted in based on achievement in local academic and community service. It does makes one wonder when a monarchy became an elected position, though. 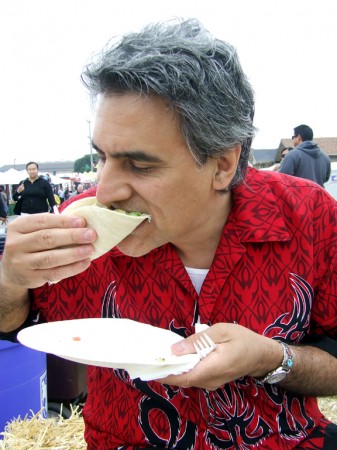 The festival has everything you would expect from a vegetable shindig (much like neighbor Gilroy’s famous garlic festival) and more: live music, carnie rides, cooking demonstrations and a wide variety of artichoke-based county fair-style food. Along side your typical fare of hot dogs, funnel cakes, cotton candy, et al., artichokes are available in a dizzying variety of preparations that Buford “Bubba” Blue would be proud of: artichoke burritos, grilled artichoke, deep-fried artichoke, carne asada tacos with artichoke, artichoke pasta, artichoke crab cakes, bacon-wrapped artichokes, artichoke-stuffed portabella mushrooms, artichoke enchiladas, sautéed artichoke and artichoke cupcakes… I guess that’s about it. The petals of the grilled variety had a smoky flavor, but wasn’t a drastic departure from the traditional steaming preparation; the sautéed artichoke was mushy and looked like it should be served as a side dish. I opted for the Our Lady of Refuge Carne Asada Tacos with Artichoke; the meat was a little chewy, but the intense flavor of the chopped artichoke hearts brought the dish to life. Crisp, finely shredded lettuce and a nice, biting salsa made the taco forget it even had meat in it, which was fine by me. I returned to the artichoke cupcake tent later in the day for dessert, only to discover in horror that they had sold out. There wasn’t even a consolation of artichoke ice cream to fall back on. We’ll return to the black market procurement of said cupcake in a bit. 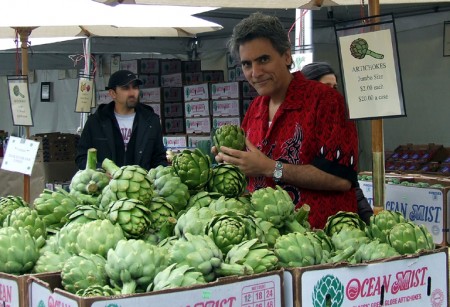 2 dollars? What a bargain!

The festival featured an AGROart contest in which the artists worked with artichokes and other vegetables akin to Spamarama’s SPAM sculpture contest. Most sculptors went with an animal theme (fish, pelicans, and a cleverly designed rattlesnake with an onion head and ear of corn for a rattle), although one adventurous participant opted to try to recreate Tim Burton’s Alice in Wonderland in vegetables. A nearby information booth sold posters, souvenirs and tickets for a tour of the artichoke fields (an opportunity I immediately seized). The tour boarded a white field labor bus (which I’m sure would have been pulled over in Arizona as “suspicious”) and headed out to two fields where annual and perennial varieties are grown. On the way, I received a call from friend David Lee (who I met at President Obama’s inauguration and now resides in the area) and agreed to meet up with him after the tour (the significance of this meeting to the artichoke cupcake espionage will become clear shortly). Pat Hopper of the California Artichoke Advisory Board conducted the tour, which started in a huge tract of land where the annual variety is grown. It was explained that what is marketed as “baby” artichokes are simply the smaller ones, which grow towards the bottom of the plant; the larger ones are at the top and the artichokes are sorted, packed and numbered by the amount that will fit in a single crate. At the second stop (where the perennials are grown), Pat explained how the aquifers are becoming brackish as the seawater replaces the fresh water being removed for the farms; using “reclaimed water” is reducing this. Although the recycled water is safe to drink, Pat stated that you probably wouldn’t want to. She showed the tour group how the artichokes are harvested (which must be done by hand since it is a visual process); the worker skillfully and one-handedly cuts the artichoke about 2 inches from the stem and deftly tosses it in their backpack (called a canasta) in a single move. A “baby” was harvested, and then thinly sliced from the bottom for anyone interested to taste the raw vegetable (which was slightly but not offensively bitter). 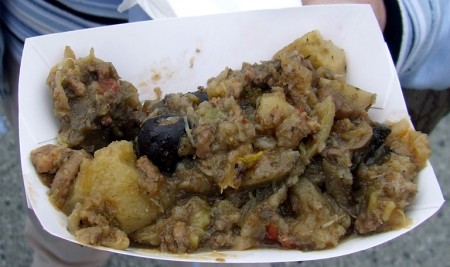 In the words of Dennis Moore, “This is a blog article, not a bloody botany lesson”, so let’s take the bus back to the festival and pick up where we left off with the tale of the cupcake. We met up with David and spent some time enjoying the rest of the festivities; the contestants vying for the title of California Artichoke Queen and King touted their resumes at the microphone, groups presented ethnic dances and song, and one street was lined with a corridor of classic cars, tricked-out rides and low riders. When I mentioned to David that I missed the opportunity to try the cupcakes prior to them selling out, he told me that he had eaten one and found it to be similar in taste to carrot cake. After a few hours we parted company, and my wife Claudia and I moved towards the exit. Before we got to the gate, we ran into David again, who had found some of his coworkers and friends and told us to go with him as he had something special for us. We went to the parking area to where his friend Shannon had parked and a door was surreptitiously opened to reveal a gleaming plastic container neatly holding a half dozen of the cupcakes. She told us that she had purchased the last six, and felt all eyes upon her as she made her way to the parking lot. We were presented with a cupcake, which we thought might require the services of an armed escort to get to our car in another lot. In fact, the people at the ticket booth saw us and yelled, “Look! They have a cupcake!”. David’s assessment of the taste was pretty accurate; it also bore some similarity to zucchini bread. It was neither overly sweet nor bitter, and was a welcome finish to a day partaking in all things artichoke.

There are other artichoke-themed things to do and eat in Castroville that can be enjoyed all year round, but that’s a story for another article. Artichokes are delicious, nutritious, fat and sodium-free, and low calorie (although slightly expensive), but if you have an opportunity to try Curly’s “feathered apple”, be sure to treat yourself to one. Just tell yourself (as the 2010 slogan goes), “Thistle be fun”!

Ocean Mist Farms (artichoke growers and sponsors of the festival)

3 Responses to Even Artichokes Have Hearts