An Evening With Anthony Bourdain 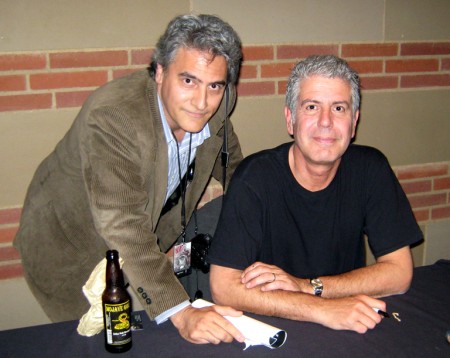 If Bourdain needs a stunt double, he has my card

“Hey, Val, if you could do anything you wanted for a career, what would you choose?” Oh, I don’t know, I’d like to visit exotic and unusual places, immerse myself in the local culture, partake of the ethnic cuisine those places are known for, seek out some hidden treasures and then share my stories with everyone using a variety of media. “You mean like Anthony Bourdain?” Yeah, like Anthony Bourdain. That guy has the best job in the world, and he and I both know that. I know that because that’s what I want to do when I grow up; he knows that because he mentions it on a regular basis, including recently at a show at Royce Hall on the campus of U.C.L.A. Knowing that the irreverent and self-described snarky celebrity chef was going to be in town, my wife Claudia (who cheerfully puts up with my sense of adventure) treated me to a VIP pass to Bourdain’s show, “An Evening With Anthony Bourdain”. This set us back almost the price of dinner at The French Laundry, but included a copy of Bourdain’s new book, “Medium Raw”, a limited edition numbered poster, preferred seating and a meet-and-greet following the show with hors d’oeuvres catered by Wilshire Restaurant. I had never been to Royce Hall (let alone the UCLA campus), so I decided to leave early to negotiate the water buffalo stampede that is Los Angeles traffic. Since I arrived early and had some time to kill, I wandered around campus a little. Royce Hall features two grand brick towers, the entrance sheltered by cathedral arched ceilings and iron chandeliers – from the outside it looked more like an old English church than a concert hall. The hall itself is beautiful in its simplicity, with the interior lined with brick (a seemingly poor choice from an acoustic standpoint), capped at the top of the stage by a massive pipe organ. I’m not sure if Anthony Bourdain, his management, the promoter or Royce Hall decided that preferred seating was halfway back in Row O, but obviously I wasn’t asked for my preference or I would have been in spitting distance. Waving my laminated “backstage pass” on a lanyard did nothing to get me a better seat than people who paid regular price. 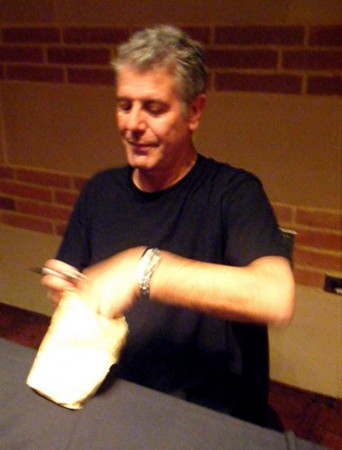 Anthony Bourdain checks out the bag of hormigas culonas

Knowing Bourdain’s penchant for punk rock, I would have thought he’d have some urban backdrop or some staging that looked like the alley behind CBGBs, but there was only a plain podium with two microphones that went unused for the duration of his show. He wandered around the stage using a wireless lapel mic, no special effects, no fancy lighting, no incidental music, just an animated, sometimes cynical, always funny chef, critic and world traveler. I found myself in complete agreement on some observations; how cutting the fin off a shark and leaving the animal to drown is a waste of life and food. He talked about ammonia-treated meat scraps going into the “gray disk” burgers at Mickey D’s and Burger King, a story that I had shared on Trippy Food’s facebook page back in January from an article in the New York Times. We did differ on a couple of opinions; for starters, he said that one of his virtues is curiosity. I am curious to the point of obsession, and I’m sure you could ask Claudia if she considers it a virtue (it’s more like a curse). Where we see things different is that Bourdain states that he will repeatedly drive past a restaurant that has Lassie on the menu, but if he is dining in someone’s house in another part of the world that is serving up “puppy heads”, he would ask for more and avoid offending his host. I’m of the opinion that is he truly was virtuously curious, like me he would be standing outside the restaurant waiting for them to open to try a nice big steaming plate of Scooby Doo, then head over to the local’s house to try the host’s take on puppy heads. The other area where we differ (although his opinion is probably more for entertainment value) is how he proposes scaring small children to not want to eat food from “The Clown, The King and The Colonel” by telling them things like eating McDonald’s burgers will “make them retarded”, or dipping a severed Barbie head in chocolate and putting it in a colorful McDonald’s wrapper. Personally, I think kids are pretty smart, and simply sharing the NY Times article on how the burgers at McDonald’s and Burger King share the same chemical compounds found in urine or Mr. Clean ought to do the trick. 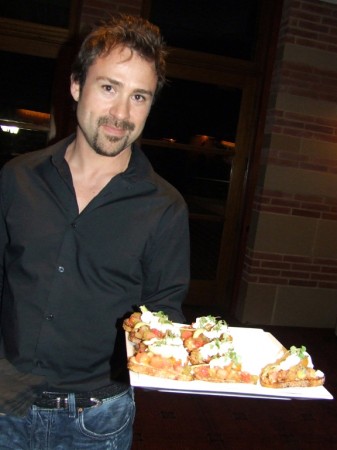 No evening with the aforementioned Mr. Bourdain would be complete without his irreverent bashing of other food show hosts, including the target of his infamous sniping, Rachel Ray. He spent some time trashing most of the Food Network hosts, including Guy Fieri, but says he’s lightened up a bit since Food Network bought the Travel Channel and they now have the same boss. Although he is not kind to Man vs. Food’s Adam Richman in print, he seemed to show some sympathy for him, joking that the network sends him on his challenges so that the audience can watch him die. He also spoke of his admiration for Andrew Zimmern, who eats sub-Saharan temperature animal entrails without the assistance of palate-numbing alcohol – Bourdain calls himself “a professional drinker”, which helps him eat some of the more unsavory food-like substances he encounters in his travels. After his lecture, the floor was opened to questions from the audience, with microphones strategically placed in the four corners of the hall. One person asked which country he would suggest more people visit, and he responded by saying that it’s a toss-up between Vietnam and Colombia, two countries that had rebounded from years of adversity. Apparently I was the only one who applauded at his choice of Colombia. Another audience member asked what his most memorable experience from the show was (good or bad), and he related that the massage in the dilapidated bath house in Uzbekistan rates at the bottom of the list. He described the massage as lying prone on a cement slab wearing a napkin on his ass, while a sweaty, hairy Russian straddled him like Ron Jeremy (a statement I found particularly funny at the after party when I saw Ron Jeremy standing at a table at the back).

After the Q&A session ended and he bid the audience adieu, I made my way back to the bar area where I picked up my poster and book and then queued up behind the velvet ropes for a photo opportunity. LAist and Here, Eat This! writer Elise Thompson had also gone to the show, and she graciously agreed to capture the Kodak moment for me. I shared the story with Bourdain of how Claudia had found one of her high school classmates from his episode on Colombia (Jorge Escandon, owner of Cartagena’s La Cervicheria) and then presented him with a small bag of hormigas culonas (roasted leaf-cutter ants from Bucamaranga); he signed his book, shook my hand and I was off (as Eddie Lin puts it, “Like a sinner after meeting The Pope”). While I nibbled on some of the hors d’oeuvres, I couldn’t help thinking that Bourdain didn’t look happy – he was gracious enough to the folks in the serpentine line that stretched onto the balcony, but he looked a bit like he had to force a smile and didn’t enjoy schmoozing, but felt it was part of the territory. The snacks were tasty – I enjoyed the ceramic soup spoons filled with a fish ceviche, and the bruschetta with heirloom tomatoes were crunchy, creamy and delicious (although I dropped a big dollop of it on the fine carpet, trying to hide the deed by cleaning it up with a napkin). The servers were dressed in black T-shirts and jeans, with the nod to Bourdain’s casual style lost to many in attendance. I hung around for a little while, but with the python that was the meet-and-greet line still winding through the bar area, I didn’t see Bourdain hanging around to chat afterwards and so decided to leave.

It’s not everyday that you get to meet one of the people who inspire you on an international level to do what you love and share the experience, and I will always be grateful to Claudia for giving me that opportunity, and Anthony Bourdain for entertaining me and for his hospitality. I still have Bill Clinton, Andrew Zimmern and Paul McCartney on my list of people I’d like to meet, but I feel a little bit richer having met Bourdain. I wrote about it, I traveled to the show and I ate hors d’oeuvres, but when I got home I was hungry for more.