Until We Meat Again

Behind the scenes at the Orange County BBQ Festival 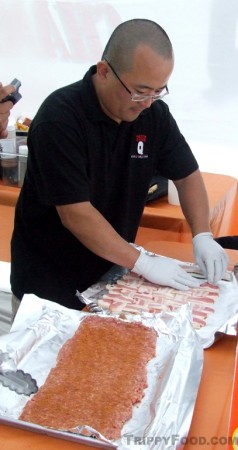 Nothing brings back the feeling of summer quicker than the smell of wood smoke and roasting meat. Granted, this is accentuated by the sound of the surf lapping at the shore and the warmth of the overhead sun, but let’s focus on the smoke and meat for the time being. It was impossible to turn down the opportunity to visit the competitors in the annual Orange County BBQ Festival the night before the festival. Each year, corporations, weekend warriors, chefs and grill hobbyists gather at the Orange County Fairgrounds to compete for cash prizes in multiple categories, including chicken, ribs, pork and brisket. The event also raises money for Kristie’s Foundation, a non-profit organization founded by Laurie Kotas in 2003 to help improve the quality of life for terminally ill children. Although a few of the contestants do barbeque for their day jobs, do not for one minute doubt the determination and tenacity of the BBQ hobbyists that participate. Many of the team names sound like they may have been derived using a random barbecue name generator. Big Poppa Smokers was comprised of a group of barbecue aficionados from Ernie Ball, including Sterling Ball (son of the guitar string king). Naturally there was representation from firefighters (Cooks N’ Ladders) and law enforcement officers who, in this case, smiled at the obvious porcine references. As the sun set, the air at the fairgrounds was filled with more smoke than at a Grateful Dead concert; many of the competitors were firing up everything from backyard Weber grills to smokers that looked like engineless Hummers. Propane torches were the accelerant de rigueur; we’re not talking one of those candy-ass Coleman blowtorches, but something more akin to the M1A1 Flamethrower. Most of the closet pyromaniacs were more than happy to demonstrate their literal firepower, drastically cutting down the time to create the ideal cooking heat. A film crew from The Food Network kept popping up filming scenes for a reality show called “Family Style” featuring Joey and Melissa Maggiore from the Maggiore restaurant dynasty; it was difficult to tell exactly what the premise of the show will be based on their presence at the BBQ festival.

Bob Gutierrez and his retro smoker

Although competition in the cook-off is fierce, there was also a great deal of sharing and camaraderie on the eve of the event. Most contestants were happy to describe, sometimes in great detail, what goes into the making of their signature offerings. There was consistent agreement that the ingredients were secondary to things such as temperature, amount of smoke, cooking time, etc. Shuji Sakai (one of the members of Four Q who goes by the name of Professor Salt) offered that in addition to calculating how long it will take to cook the meat, consideration needs to be taken as to how it will taste after it has had time to cool off on the judges’ table. The fun part of visiting the night before was partaking in the community spirit of sharing, and enjoying the food prepared by the contestants that will never be entered into the contest. Several of the contestants, including Professor Salt and Harry Soo (head cook for Slap Yo Daddy BBQ) were preparing the Internet’s viral sensation, the Bacon Explosion (aka “the fattie”). This overindulgent conglomeration of pork products weighs in at a respectful 5,000 calories with 500 grams of fat, yet it is long on taste and simple to prepare. A seasoned bacon-weave mat is wrapped around a roll of ground sausage filled with chopped, crispy bacon; it is then smoked for several hours. Sakai’s version was basic yet attractive; Soo prepared several over the course of the evening shaped like a turtle and a centipede with cocktail wiener limbs and extremities. The intensity of the bacon flavor gives this artery-destroying dish its name, and both Soo and Sakai’s creations were outstanding.  Get Your Rub On cook Bob Gutierrez was preparing Baja-style pork al Pastor tacos in a propane-fueled cooker of his own design; the layers of meat were stacked on a vertical rotisserie (such as those used to prepare gyros) with a giant chunk of pineapple at the top that dripped its juices over the meat. If the competition allowed tacos, Gutierrez’ open-faced pork dish with queso fresco, cilantro, onions and bits of the aforementioned pineapple would have been the hands-down winner.

Harry Soo is all about sharing

Contestants gathered in a huge tent to review the schedule and the contest rules, and to hear an address from Laurie Kotas. There didn’t seem to be a great deal of questions, presumably because the participants were all aware of the rules, including the consumption of non-sponsored alcohol, late night noise ordinances, etc.- there were deck chairs, tents and hammocks in great supply, and it was clear that the participants were in it to win it. The same tent that provided the facilities for the address was also used as the site of the potluck supper. Many of the participants brought or cooked food to share, and teams intermingled at the tables, sharing food and conversation. Harry Soo provided a delicious seared ahi tuna with Maui onion dressing along with his reptilian fattie (which disappeared in minutes); other tasty and notable items included a pork pastry appropriately called “Piggy Pie”, New Zealand lamb chops, Billy Nicola’s rich, barbequed Butt Bustin’ Beans and Cooks N’ Ladders’ BBQ meatballs with bacon and onions. If there is any secrecy between contestants, it was nowhere to be seen at the potluck – just a relaxed gathering of people who shared the joy of cooking and eating barbeque with each other.

You can hear your heart scream out in pain

As for the competition itself, Rib Ticklers BBQ took the $7,000 Grand Champion prize along with top honors for overall and brisket, while Soo’s Slap Yo Daddy grabbed the Reserve Champion honors and the top pork slot. The BBQ Shack and Grill won in the chicken category, and Smokin’ Yankees BBQ snatched up the prize for best ribs. I’m sure the competition itself was fun, as was tasting the various entries in hopes of finding the ultimate in barbecue, but as far as I’m concerned sharing the previous evening’s preparations and breaking of bread was smokin’.

1 Response to Until We Meat Again