We Celebrate When The Gang’s All Here 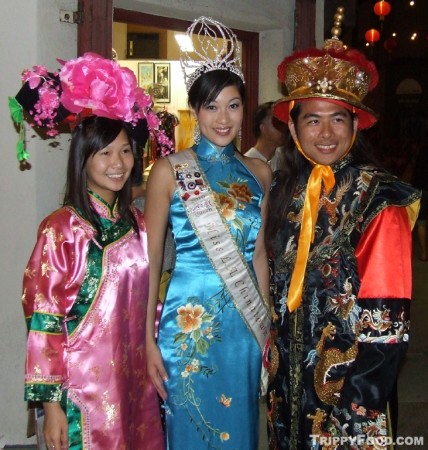 L.A. boasts a decent sized Chinatown, yet it is often culturally overlooked by the rest of the city. This recently prompted several civic organizations to plan and sponsor a festival spanning four Saturday nights in celebration of Chinatown’s diverse culture. Chinatown Summer Nights features DJs set up in several locations with live cooking demonstrations, street performances and participation of many of the local restaurants and shops who stay open late for the event. The festival also features many of L.A.’s food trucks, although oddly enough at the most recent event, only one food truck (Korean Ahn-Joo) was Asian-themed. Having the trucks at the festival was a double-edged sword; on one hand, some of the local restaurants objected to the trucks pulling away their business, but on the other hand, they attracted event-goers that might not normally come to Chinatown otherwise. The food truck population was well represented by the World Fare double-decker bus, Brazilian Ta-Bom, The Surfer Taco truck, Spring Street Smoke House (a BBQ truck), Tropical Shave Ice, the aforemetnioned Ahn-Joo, the Crepe’n Around crepe truck and the Grilled Cheese Truck, which seems to be everywhere these days. Even through the Grilled Cheese Truck had the largest line (which stretched up the block), the other trucks did a brisk business, some closing early after running out of food.

Although I am a big fan of some of the trucks, I wasn’t about to fill up on truck food at a celebration of Asian culture. I visited Hoàn Kiếm earliy in the afternoon with Deep End Dining‘s Eddie Lin, who was interviewing them to discuss the food they were going to feature in their cooking demonstration that evening. Hoàn Kiếm is a three-trick pony; they only serve three dishes, and if you’re looking for Vietnamese sandwiches or a variety of pho, look elsewhere. I would advise, based on my experience, that you stay and enjoy at least one of those three dishes, as they are prepared with simple, fresh ingredients with the finished product being pure, hearty and healthy cuisine. The phở gà Hoàn Kiếm is quite simply chicken noodle soup, made in the traditional style of the Ho family the way it was made in their hometown in the north of Viet Nam. Fresh (alive) chicken is sourced locally as are their noodles – with the side cilantro and jalapenos liberally added, the dish warms you inside and out. The other specialty dish that has been a staple since the restaurant opened 18 years ago is the bánh cuốn thịt, a steamed rice flour crepe filled with ground pork and mushroom. Each roll is made to order with the thin rice batter ladled on to a wooden ring with a cloth stretched over it. The cloth is placed atop a pot of steaming water (often the water the noodles are cooking in) and as it cooks it is lifted off with a thin metal spatula. Delicate and light, they are full of the flavor of the fresh ingredients. The third dish is a recent addition – cơm gà Hải Nam (Hai Nam chicken rice). The rice is made with the broth from the chicken and is served with simple, unadorned chicken slices with the skin still attached. The restaurant was taken over by the 6 Ho siblings from their aunt; they take turns rotating in (since they also have other careers that re easier to juggle with the restaurant’s 11 AM until 4 PM hours). A cup of Vietnamese coffee made with Cafe du Monde was the perfect finish to the simple yet delicious lunch.

At the event itself, I spent the bulk of my time watching the cooking demonstrations by four local eateries: the Golden Dragon Seafood Restaurant (specializing in Cantonese cuisine and dim sum); Cantonese restaurant Hop Woo (who seemed to be preparing the most daring cuisine of the evening; Vietnamese entry Hoàn Kiếm, and finally the Plum Tree Inn (a Chinatown fixture for over 30 years, catering mostly to people looking for “Americanized” Chinese food. Eddie Lin was emcee’ing the demonstrations, giving a play-by-play of the preparations and a little history of the restaurants and the cuisine. Each particpant cooked in front of the crowd, plated their creations and then sent them off to the side where volunteers put samples into tiny versions of the familiar white take-out boxes for the crowd’s consumption. At one point the volunteers were handing out bottles of soy sauce when the crowd went into a feeding frenzy like sharks in chummed waters. The volunteers switched to walking through the audience and handing them out individually, but there was a tense moment when I thought the event might end like a Cincinnati Who concert. Eddie made a grand entrance realizing his dream of one day pushing a dim sum cart; the demonstrations started immediately with the phoenix talons (chicken feet dim sum) on Golden Dragon’s dim sum cart distributed to the crowd. I have previosuly had chicken feet that required constant gnawing to try to free the meager meat off the bone, but Golden Dragon’s preparation was easily worked off the bones cleanly by tongue and was absolutely delicious. Chef Sito began preparing a steamed red snapper, which he started scaling and gutting while it was still flopping about. At one point he cut into the bottom of the fish, which spilled a green body fluid across the table; I imagined any one in the audience who caught a sight of that may turn down a sample, but it didn’t appear to affect the taste. Chef Sito then prepared a sweet and pungent chicken dish that plated beautifully and had the perfect balance of flavors.

Enjoying the Pancake Breakfast and Black Jack ice cream - together

Between Golden Dragon’s demonstration and second string Hop Woo I decided to hit the Lake Street Creamery truck as I was intrigued by two items – the Pancake Breakfast and Black Jack. I had been thinking about making a Sunday Breakfast ice cream with pancakes, bacon, maple and eggs, but it appears that Lake Street beat me to the punch with the Pancake Breakfast ; where their creation differed was with the exclusion of eggs, but the addition of freshly ground coffee. Being a sucker for black licorice, I was compelled to try the Black Jack as well, but in a momentary lapse of reasoning I opted for the double scoop with one of each nestled side-by-side in a waffle cone bowl. I decided to eat the Pancake Breakfast first, since the chances of tasting anything else aftyer consuming the Black Jack were slim to none. The maple was the prominent flavor, but as the crumbly bits of bacon became present the saltiness offset the sweetness of the ice cream and the maple syrup; the coffee took a back seat with just a hint of coffee flavor throughout. The Black Jack was no holds barred, in-your-face black licorice flavor that hit the palate like a punch to the solar plexus, and boy, did it hurt so good.

I returned for Hop Woo’s demonstration by Chef Lupe Liang (who took on his obviously un-Asian name while cooking in Mexico). Liang’s presentation was by far the most entertaining and daring of the evening; the first selection (fried squid with spicy salt) was tame enough, lightly battered and not overpoweringly salted, but I had to take a couple of steps back when he was preparing the fried pig intestine. These were the lower intestines, and even though they had been thoroughly cleaned, the smell of the south end of the pig frying was one of those things you try to politely ignore, or at least try to get out of your head. The finsihed product was crispy, and thankfully didn’t have the dicey flavor sometimes accompanying chitlins or other assy tidbits. Being a big fan of pig innards I was not put off by Chef Liang’s preparation of the offal for the congee, but I could see audience members wincing as he sliced and scored the liver, kidneys and stomach. Skeptics in the audience reacted with amazement when they sampled the congee; the sweetness of the rice porridge effectively cut the strong taste of the assorted gut pieces suspended within. Liang’s final act was the most spectacular – he cut and seasoned a pre-cooked jellyfish that looked like a sheet of thick, translucent skin, placed it into a mound and surrounded it by quartered 1,000-year-old eggs and a ring of candied walnuts. I had tasted all three of the main ingredients previously, but never combined, and although I had reservations I have to say that the creaminess of the egg yolk, slightly chewy jellyfish, spice from the chili and sweet nuttiness from the walnuts worked well together.

Having seen Hoàn Kiếm’s preparation earlier in the afternoon, there weren’t many surprises, but I have to say that they made up for simplicity in the joy of their preparation, inviting audience members (including Miss Chinatown) to make the rice crepes. The family is close, warm and welcoming and shared the same exuberance at the event that they did at the restaurant earlier. Headliners Plum Tree Inn had the least interactive performance; while the smell of the sweet and pungent shrimp, kung pao chicken and crispy beef was intoxicating and the dishes looked beautiful plated, it was hard to get excited about dishes that can be found in Chinese restaurants in most strip malls. Still, the samples were spicy and prefectly cooked, but I was hoping they’d offset the run-of-the mill selections with some culinary pyrotechnics. Chef Manuel Sanchez Lee spoke no English, but carried on a brisk conversation with Claudia in Spanish afterwards (which he picked up, along with his name, during his 10-year stint in Venezuela). The cooking demonstrations ended about 10:30, but the DJs played on and the bars (and some restaurants) kept going until midnight.

This is the first time the event has been held, but hopefully the feedback and attendance records will warrant it being turned into an annual festival. Chinatown Summer Nights brings business to the area but also opens cultural doors to people that may not normally venture into Chinatown to sample a little slice of life in the Far East. Anything that educates people who otherwise think China is expensive dishware and Asia is a British progressive pop band from the 80s is all right in my book.

1 Response to We Celebrate When The Gang’s All Here