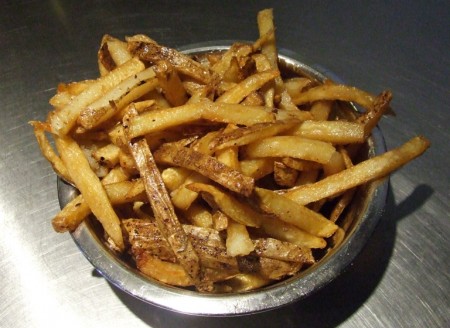 In 2003 (by demand of two Republican Representatives), the United States Congress cafeteria renamed French fries “Freedom fries” in an effort to slight the country of France for not participating in the Iraq war. Thankfully, the utter absurdity of this nonsensical endeavor was reversed a few years later before we had to endure sharing a Freedom kiss, drinking Freedom-pressed coffee, eating Freedom toast and Freedom vanilla ice cream. Never mind that they had it all wrong; in fact, the French Embassy highlighted their stupidity by indicating that the fried potato dish we know and love as French fries originated in Belgium, and further adding, “”We are at a very serious moment dealing with very serious issues and we are not focusing on the name you give to potatoes.” The history of French fries as we know it is vague, as is the origin of its name. The most common explanation for the name comes from World War I soldiers in Belgium being served paper cones filled with the cut and fried potatoes by the often French-speaking Belgians preparing them, but there are references to U.S. President Thomas Jefferson referring to potatoes prepared “in the French style”. Potatoes have a South American ancestry, having spread to Europe during Spanish colonization, and then back to the New World – through the centuries these have been served in a variety of preparations (including deep frying), but the familiar thin, lengthwise-cut and fried potatoes we call French fries most likely originated in Belgium in the late 1600s. Lest we digress into Fried Potatoes 101, I’m going to disregard French fries’ cousins home fries, steak fries, British “chips” (which are more true to their name anyway), cottage fries and hash browns. By the way, be wary of the surname “fries” on the menu in exotic restaurants; trust me, when you order the bull fries expecting large, crispy golden brown potatoes to appear at your table, you will be disappointed. Horrifically disappointed. 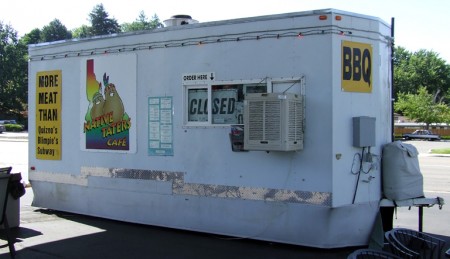 I’m going to ignore fast-food French fries. While McDonalds started out cutting fresh Russet Burbank potatoes on demand, they evolved into the frozen, sprayed, artificially-flavored abominations Americans seem to not be able to get enough of, a mass-produced side dish imitated at most fast food chains. Since we’ll start with the basics and work our way up to variations on a theme, I’ll take you to a place synonymous with potatoes – Boise, Idaho. One would assume (incorrectly) that once you hit Boise city limits you’re greeted with giant potato sculptures, billboards, tuber-shaped buildings and free-flowing Spud Beer fountains; oddly enough Boisians don’t really seem to embrace their potatoey reputation. It’s not that they distance themselves from it (after all, the state license plate still reads “Famous Potatoes”); they just seem to have an indifference to it. The closest thing Boise has to a food truck is Native Taters, a trailer parked somewhat permanently in the parking lot of a tobacco store occupying a former gas station. Boisians rave about Native Taters’… ready?… sandwiches. Oh, yes, they also serve potatoes, but you wouldn’t know it from the signs on the trailer that tout how much more sandwich you get for your dollar over Subway, Quizno’s, etc. So how are their potatoes, you ask? I wouldn’t know, since they apparently have decided that Saturday isn’t a big business day and remain closed. On the other end of the spectrum, there is one place in Boise that proudly celebrates their association with the potato – Boise Fry Company. This place is all about the French fry, to the point where their logo proudly proclaims “burgers on the side”. The menu is available on their ever-changing board that looks like something you’d see in the stock exchange. The available potato varieties are handwritten on the board, along with the small, medium and bowl prices; in columns to the right are check boxes indicating the available preparations of the day; on my visit, Russet Burbank, gold, Peruvian purple, and Okinawa potatoes, yams and sweet potatoes were available traditionally cooked, home-style, or as curly or shoestring fries. I had a hard time deciding which I wanted to try until my eyes wandered to the bottom and caught The Bourgeois – fresh-cut local Russets fried in duck fat and seasoned with black truffle salt. Although the local free-range beef and bison burgers served on freshly baked potato wheat buns sounded appetizing, I knew that just The Bourgeois was going to be satisfying enough to qualify as lunch. Just the smell of these savory, golden beauties was giving me a massive food-on. A topping station provided sauces, spices and other specialty garnishing, but I knew that it would be a sin to hide any of the flavor inherently found in this dish. Claudia and I slowly savored the fries in the car; there was still crispness left in them, but they were moist and perfectly cooked and the truffle salt was not heavy or overbearing. 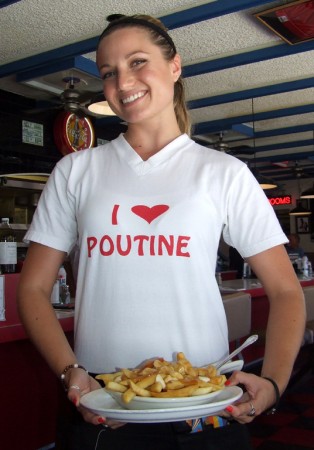 Danielle at Redondo Beach Cafe means what she says

A dish with somewhat recent culinary heritage, poutine has been the celebrated specialty of Canada’s Québec Province since the 1950s. The name loosely translates in French Canadian as “a mess”, which can often accurately describe poutine. On a basic level, poutine consists of French fries topped with cheese curd (the curdled solids made from soured milk) and doused in a brown sauce. The quality of the ingredients makes all the difference in the world, as the curds lose flavor and consistency quickly, and the sauce is locked in the middle ground between broth and gravy. The brown sauce is seasoned and usually chicken-based, although there is an Italian version of poutine that is served with tomato sauce. Poutine’s popularity has spread throughout Canada to the point where it is available at international fast-food chains, but I will never speak to you again if I ever hear that you’ve succumbed to this evil transgression. In the U.S., poutine makes surprise appearances on the menu from time to time and seems to be becoming a trendy starch in gastropubs and even on gourmet food trucks. As a Bostonian, I was a five-hour drive from a poutine and smoked meat sandwich fix; living in SoCal makes that trip a little more difficult, which made me ecstatic to find the Redondo Beach Cafe. This gem was founded by Montreal expatriate brothers Chris and Kosta Tsangaris, who ended up with a 50s-style diner that specializes in the Greek and French Canadian cuisine of their heritage. The clean red, black and white retro restaurant looks like it was decorated by Guy Lafleur, a decent place to hang and watch a hockey game, but trust me when I say that when it comes to the poutine, they mean business. Their poutine is garnished with an herb and spice seasoning, and topped before serving with a brown sauce (both imported from Montreal). They use sea salt and olive oil from Greece in all of their dishes, and make a mean smoked meat sandwich made from slow-cooked brisket and a close-to-authentic Montreal rye baked in-house. The food is nothing short of traditional, fresh and delicious, but in a shrine to hockey, you need to be careful when saying, “Check, please!”

Frysmith has taken the art of topping French fries to another level. In April of 2009, Erik Cho and his wife Brook decided that they wanted to be a part of the then-young gourmet food truck scene; they had always dreamed of owning and operating a restaurant and since French fries had always had a special place in their hearts, they decided to use this as the theme for their rolling restaurant. You could say they were destined to run a potato-themed food truck – their vehicle of choice was a Lay’s Potato Chip delivery truck used not only to store biodiesel fuel, but that also runs on it. If having a truck that runs on the by-product of its output isn’t kismet, I don’t know what is. Brook’s father had the idea to strip the vehicle down to bare aluminum which created a brushed-metallic look that makes the Frysmith truck look like the Frialator may be powered by a 1.21 gigawatt flux capacitor. Along with their rough-lettered anvil logo, Frysmith has a commanding presence when it rolls up to the curb, but looks alone don’t get return customers. Since opening in November of 2009, Frysmith offers a standard menu of 5 French fry-based items: Rajas Fries, topped with Angus steak, poblano peppers, onions, and Monterey jack cheese; sweet potato fries with chicken, cheese and a sweet and spicy sauce; kimchi fries with Kurabuta (Berkshire) pork belly and kimchi, a vegetarian chili offering and the tried-and-true chili cheese fries (although made high-end by using Angus beef and chocolate ala Cincinnati chili). The French fries themselves, although natural and fresh seem to provide a palate for the other ingredients; choosing the dish is more about what toppings to get. The Rajas fries use high quality steak and seasonings, but when you’ve stripped the fries bare of the toppings it makes it harder to want to eat them. The kimchi fries are also delicious, although the kimchi is relatively mild and may not appeal to hard-core kimchi fans that like a more aged, effervescent vegetable. It seems that what you get on the fries makes the meal, and I’ve enjoyed everything I’ve tried off the truck so far. Frysmith is looking to expand soon, and is adding unpublished menu items such as a “poutine of the day” and a burrito stuffed with one of the French fry dishes, sour cream and cheese.

French fries are often candidly dismissed as a second-class side dish, and in most fast food preparations that may be well deserved. Before you turn your nose up at the golden tuber sticks, try them as a main course prepared by someone who treats the lowly, dirt covered spud with the same respect and admiration Luther Burbank and George Washington Carver had for them. Reckon I’ll have me some of the big ‘uns…


GALLERY: See images of a variety of preparations of French fries

Enjoy your French fries with Carl: