Out In The Street 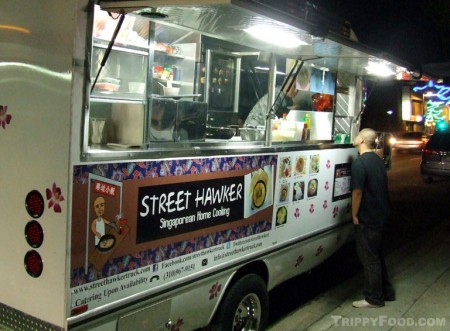 Street hawkers were once a thriving part of the Singaporean landscape, providing cheap and plentiful food from stalls on the street, as well as dysentery, ptomaine, salmonella and a wide variety of gastrointestinal treats. Over the past half decade, the government of Singapore has taken most of these vendors off the street and consolidated them in hawker centres where they are heavily regulated and inspected for cleanliness. In recent decades these conglomerations of food stalls have been referred to as “food centres” partially to avoid their sullied past reputation. Meanwhile in the United States, the concept of putting relatively inexpensive food on the street has escalated in the form of the gourmet food truck scene, so it’s somewhat fitting that one of the newest trucks to join the ranks of Los Angeles’ fleet of street vendors is Street Hawker. Event attendees at the recent Chinatown’s Mid-Autumn Moon Festival may have stumbled across Street Hawker parked alone on a dark, quiet stretch of Broadway. The infant food truck has only been in operation since mid-September of 2010 according to Simon, Street Hawker’s manager. The truck is small with glass all the way across the business side, giving the impression of a street stall with wheels and leaving no room for doubt that they dish up “Singaporean Home Cooking” as advertised. 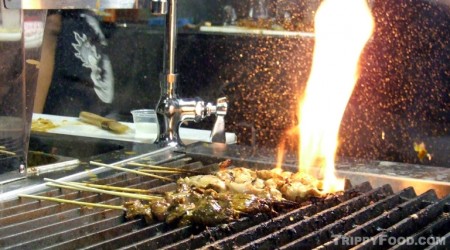 Satay cooking on an open flame

Street Hawker has eight traditional dishes, including the popular Hainanese chicken rice. One camera-shy couple I encountered at the truck hailed from neighboring Malaysia, and as they tore into the chicken and rice dish I asked about its authenticity. They told me that Street Hawker’s rice was more aromatic and flavorful than what would typically be found in a Singapore food centre, and that the chicken was tender and delicious. Other dishes that would do Singapore proud include nasi lemak (meat and vegetables served on the side of a mound of coconut rice) and satay grilled over an open flame. I wanted to try something on the unusual side, so Simon recommended the roti prata (a grilled flour pancake) with chicken curry. Since the temperature that night was a few degrees short of lava I decided to purchase a cold beverage to wash down the tasty roti prata, although I found it hard to choose between the soy bean milk, lime with jelly or ice barley with lime. I took the chef’s recommendation of the ice barley and waited patiently for my home-cooked order. The ice barley was funky strange – it was refreshing, with a nice citrus accent from the lime, but when the whole barley grains found their way up the straw it was like drinking a cold glass of breakfast. Simon was apologetic about the wait (that to me didn’t seem all that long), and I walked into the night to find a place to sit and consume my Singaporean street food. 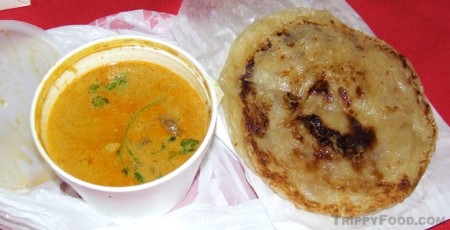 The pancake was slightly oily, but neither overly crisp nor soggy. Rather than to ladle the yellow curry chicken over the pancake, I decided to break off pieces and dip. The curry was astounding – it packed a spicy and rich punch, drowning the huge helpless chunks of tender chicken. While fishing around in the curry, I found a whole leg section that simply fell off the bone when prodded with the spoon. All in all, the roti prata with the chicken curry was one impressive dish. On a later visit to Street Hawker I discovered that he upped the ante – Simon had switched to a rich, earthy red bowl of curry; in addition to being rich, flavorful and aromatic it had a kick that would burn your socks off.  On that same visit, I sampled the fried bee hoon, a mix of noodles, peppers, shrimp and a galaxy of other ingredients that blended textures and combined tastes without losing any of the qualities of the indiviual ingredients. 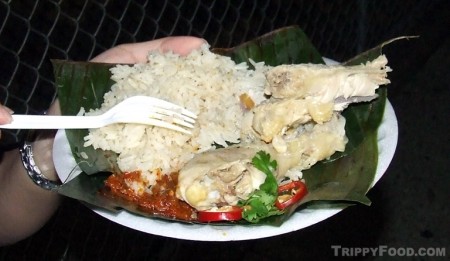 The beauty of enjoying ethnic street cuisine from Street Hawker (like some of its elder sibling food trucks) is that you are transported to a bustling thoroughfare somewhere else on the planet and can forget you’re in LA for a short while, which these days is a blessing. Street Hawker is a refreshing change on the food truck scene, but I’m not sure we’re quite ready for hawker centres just yet.

One Response to Out In The Street