With no disrespect intended, mention “Brazilian” and some people think, “wax”, but in Los Angeles on the weekend closest to the anniversary of Brazil’s independence from Portugal, the sticky substance in abundance is tar. The annual Brazilian Day festival has been held for the past 5 years in Hancock Park, a green area framed by the famous La Brea tar pits. You won’t be sinking into the black gooey quagmire while participating in the festivities, although after the chowing down on rich Brazilian cuisine you might want to walk it off by a visit to the Page Museum located in the park, or simply stroll around the fenced-off pits. The festival area is ringed by a row of tents where vendors on one side offer goods and services from and for Brazilians, and on the opposite side offer up delicious traditional Brazilian fare prepared fresh locally. It’s a one-stop shopping trip where you can get a Brazilian soccer jersey, a can of Guaraná Antarctica, sign up for dance classes, stock up on Brazilian groceries, buy a painting of a green and yellow-clad Christ the Redeemer kicking a goal off Corcovado Mountain, enjoy a half dozen coxinhas and finish them off with a brigadeiro and a cup of coffee. The 2010 festival was hosted by radio personality Sergio Mielniczenko of the Consulate General of Brazil (the event’s founder and sponsor). 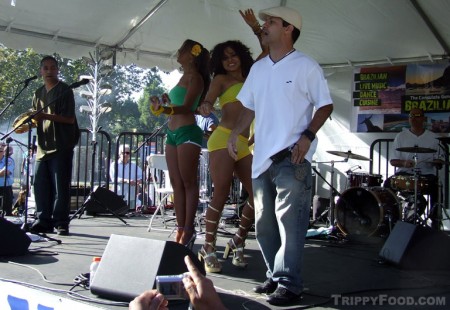 The sights and sounds of Sambajah

Entertainment starts early on the stage set up at the back of the park, with a huge tent erected in the center for festival attendees to enjoy the music out of the oppressive sun. At the 2010 festival, Brazilian music acts Los Brazilian Boys, Muamba, Sambajah and Renni Frores provided musical entertainment while Capoeira Gaiamum dazzled the audience with the breathtakingly beautiful traditional art form of capoeira (a cross between dancing and martial arts) on the wooden dance floor. Brazilians know how to party and the summer heat did nothing to keep the samba dancing at bay; during the last song in Sambajah’s set, the two female backup singers tore off their green tunics to gyrate at the front of the stage in skin-tight green and yellow outfits and 6-inch platform shoes to the gratification of the camera phone-wielding crowd. It was impossible not to get caught up in the music – it seemed that a few people at the front of the crowd were dancing to the beat of a different drum, but their enthusiasm was contagious. 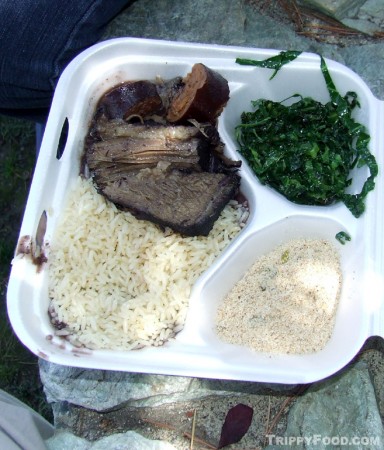 If you worked up a good appetite there was plenty of Brazilian favorites to choose from. The event was free, so naturally food was available for purchase; even though there were only about 6 food vendors, there was a decent selection from each. Most stalls had Brazilian favorites pastels and coxinhas, but I took advantage of the opportunity to have what many consider the national dish of Brazil: feijoada. Brazilian Exotic Foods had what looked like the best at the festival, and I was almost tempted to try the feijoadinha, a small, breaded and fried football made of the feijoada and collard greens, but it seemed like the feijoada completa had everything I could possibly want. The rich, slow-cooked black turtle bean and pork stew was savory and filling; the pork simply melted in my mouth. In addition to the feijoada, little compartments held fresh and still crispy sautéed collared greens, cassava flour farofa, white rice and big, thick cross-sectioned sausage. There was an overall salty flavor to the dish, but fortunately it wasn’t overpowering. In the meantime, Claudia had waited in line for Brazilian pizza from Bella Vista Brazilian Gourmet Pizza. At their restaurant in Culver City the mode of dining is “all you can eat”, but at the festival it was by the slice. They offered flavors familiar with Americans, but also featured pizza popular in Brazil such as frango con catupiry (chicken with the cheese used in coxinhas) and a remarkably sweet and delicious pie appropriately named “Romeo and Juliet”. Upon first consideration, one wonders how a pizza with star-crossed ingredients like cheese and guava paste works; the answer is quite well. There is no tomato present leaving the crusty dough to serve as an edible plate for the cheese and guava (which is eaten in that combination in many Latin American countries anyway). After we shared our dishes, I had queued up to get some coffee at Sabor da Bahia’s booth while Claudia stood in line for some brigadeiro; I purchased the coffee and met up with Claudia, who instead of getting us a couple of dainty, chocolaty brigadeiros returned with a slab of brigadeiro cake the size of your head. I think I prefer the rich, moist dessert ball form, but the cake was tasty (although a little dry). 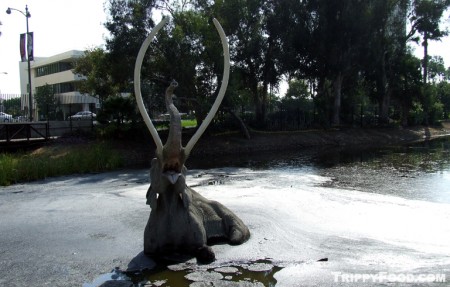 Many sabertooths died trying to eat one of these

After spending some time at the festival, you can double your fun by taking in the tar pits. The largest of the pits has filled with rainwater, but big, greasy black bubbles percolate up to the surface and pop near statues of mastadons trapped in the mire. One of the pits in the back that is being excavated has a little viewing shack where you can see the progress and get a better idea of the painstaking process required to extract the layers of ice age bones and debris from the tar. The bones jutting out of the tar don’t look like much, but a visit inside the Page Museum onsite opens your eyes to a menagerie of amazing animals that have been extinct for tens of thousands of years: American lions, ancient camels, saber-toothed cats, giant ground sloths as big as grizzly bears and the scourge of the ice age, the dire wolf. One exhibit takes up an entire wall – it is simply a glass case containing hundreds dire wolf skulls extracted from the pits. Many of the species that have long since disappeared have their bones reassembled for display, and a few life-sized dioramas feature animatronic beasts in something that looks like it might be called “When Disneyland Animals Go Bad”. At the center of the museum is a glassed-in paleontology lab where you can watch researchers delicately remove objects as large as mammoth pelvises and as small as insects from their tar prisons.

Hosting the annual Brazilian Day festival at the La Brea Tar Pits seems a little disjointed, but it gives you the opportunity to roll two activities into one. Be sure to pace yourself, because enjoying yourself under the hot August sun in Los Angeles can beat the tar out of you.