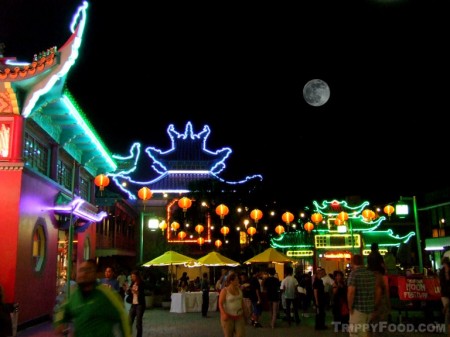 Chinatown in LA during the Moon Festival

China marks the autumn equinox with the Moon Festival (also known as the Mid-Autumn, Lantern Festival or Mooncake festival). The celebration is traditionally held on the 15th of the 8th lunar month, although for 72 years (not in a row) it has been held in Los Angeles’ Chinatown on the Saturday closest to the full autumn moon. The mythology behind the festival dates back several millennia to the Shang Dynasty, primarily centering on the beautiful Chang’E (or Chang Er), who swallowed a pill (either by force, as an act of self-sacrifice or by curiosity, probably after a conference call with Eve and Pandora) that granted eternal life; when her husband Houyi found out he became angry, causing her to fly to the moon where she remains today. There’s something more magical about flying to the moon after a marital argument than simply sleeping on the couch. She is accompanied on the moon by the Jade Rabbit (his famous bunny head silhouette clearly visible on the moon’s surface); his job is to create an antidote for the flying pill to allow Chang’E to return to Earth. If you’re curious like me, you’re wondering how the Jade Rabbit appeared on the moon. As the story goes, three fairy sages morphed into old beggars, asking for food from a fox, a monkey, and a rabbit (most likely because the Stop and Shop was closed). The fox and the monkey gave them some of their food (which may or may not have included rabbit); since the rabbit had no food to offer he jumped into a fire as a sacrifice. For his selfless act, the sages let the rabbit live in the Moon Palace to become the Jade Rabbit (without singed fur, one would assume). 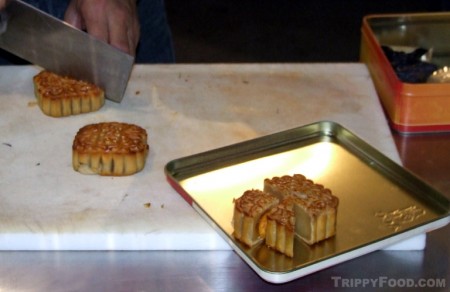 During the Mid-Autumn Moon Festival, it is traditional to eat the Chinese version of the fruitcake – the mooncake. Legend has it that during the Yuan Dynasty the Chinese people were plotting to overthrow the Mongol oppressors who had occupied the land. In order to pass information without being detected, they baked messages into small cakes which were distributed under the guise of a blessing for the emperor. The messages informed the Chinese people to rise up against the Mongols on the 15th day of the 8th lunar month, which successfully resulted in the formation of the Ming Dynasty. From that day on, mooncakes were eaten on that day to commemorate the great event. I’ll delay the description of how mooncakes are made for later in the article, but keep in mind that mooncakes are about the size of a can of tuna fish with the name of the bakery or type of cake baked into the cake. Since mooncakes are generally sold in boxes of four, it is a common practice to “re-gift” them; as the old saying goes, “It’s the thought that counts”, and when you receive a single mooncake without no salted duck egg yolk, you’ll have a pretty good idea of how you’re thought of, and know what to do with those knitted powder-blue socks Aunt Molly made for you. 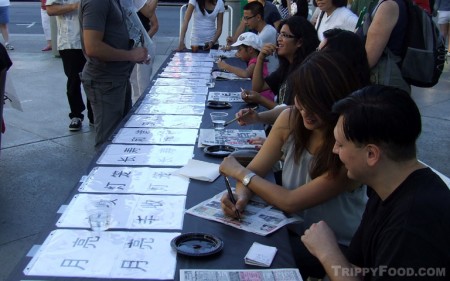 The event itself was very similar to the Chinatown Summer Nights celebrations earlier this year. DJs from KCRW provided music in Central Plaza while vendor booths lined the surrounding walking paths. L.A.’s omnipresent food trucks were lined up along Gin Ling Way, for the most part intentionally featuring non-Asian cuisine; demonstrations of martial arts were held in the plaza and one huge white wall had video projected onto it. Deep End Dining’s Eddie Lin reprised his role as MC for the cooking demonstrations with 5 local restaurants featured In Chungking Plaza across Hill Street. Tables were lined up at the front of the plaza that allowed participants to try their hand at Chinese brush calligraphy while along the sides artists painted faces, made melted candy figures and self-proclaimed “dough artist” Chris Lee created colorful, detailed sculptures on a stick. Around the corner on Chungking Road a ping pong tournament was being held to the left, while a traditional big band performed to the right. The first restaurant featured in the cooking demonstrations went by the odd name of Queee Sushi Station and Portuguese Cuisine. Chef Paulo Soares created cod fritters which proved once and for all that fish truly do have balls; these were served with fresh-tasting new fall potatoes and accompanied by a spicy, pepper-based piri-piri salad. Not an easy act to follow, but Chef Da Fang Xuan of Golden City Seafood created golden fried black mushrooms with spicy salt and a wok-fried French-style beef dish that gave off an intoxicating aroma. The mushrooms were hot, firm and tasty, but unfortunately the beef was a bit chewy. 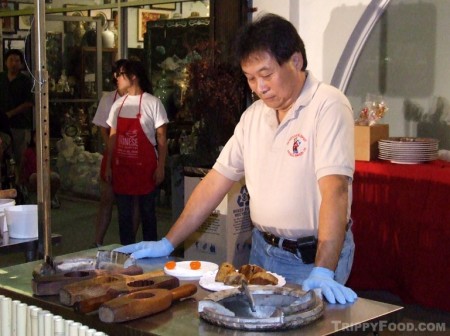 After the first two restaurants presented their cuisine, Ken Chan of Phoenix Bakery gave a demonstration to the audience showing how mooncakes are made. There are a variety of the little cakes, with the three main types being red bean, lotus seed paste and fruit and nut. Typically a salted duck egg yolk is placed in the middle of the paste, which is then wrapped in dough and pushed into a carved wooden mold with a handle like a thick paddle. The mold is whacked on its side against the table, turned and whacked on the other side, then flipped cake-side down and hit one final time, dropping the unbaked cake into the baker’s eager hand. Chan explained that he has been making mooncakes for 30 years with the bakery being family owned for three generations; unfortunately experience did not translate into a flawless performance, as the first time he popped a cake from the mold it landed squarely on the ground. A young girl from the audience tried her hand at making one, as did MC Lin while wearing a single purple-gloved like Michael Jackson’s pastry chef. Obviously in the interest of time they did not bake the cakes on the premises, but had some on hand that were made earlier in the day. After baking, the cake is typically cut into quarters, which displays the orange yolk in the center with each recipient getting a piece. The cheapest (and I mean that towards the cake and its purchaser) mooncake has no yolk inside; they then vary in cost depending on the number of yolks, with up to four in a single cake. Phoenix Bakery had brought lotus seed paste cakes, which had the texture and flavor of a less-sweet marzipan in a pastry shell. 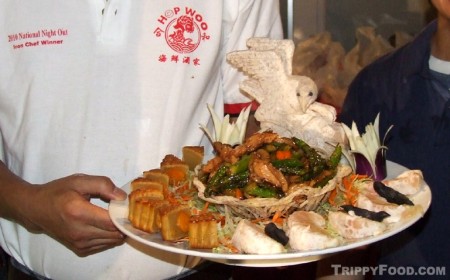 Fried and braided taro bird nest with chicken and asparagus

The mooncake demonstration was followed by the two most dramatic of the evening (for completely different reasons). The first was by Chef Lupe Liang of Hop Woo BBQ Seafood Restaurant who prepared a series of dishes not featured on the menu that were designed specifically for the Moon Festival. The first dish was spectacular in its presentation; strands of taro were woven into a basket “bird nest” and fried, with a winged bird carved from taro root perched above the natural bowl. The nest was filled with fragrant, sizzling chicken with asparagus, and then garnished along the sides with orange segments, mooncake wedges and whole black water chestnuts. These aquatic seeds (also known by the proper name of water caltrop as well as Singhara, buffalo nut, bat nut, or devil pod) look like the black head of a water buffalo or a bat with outstretched wings and have a taste like a dry, woody chestnut – a nice treat to drop into the kid’s Halloween goody bags. Chef Liang followed the fake bird nest with a dish featuring tender Napa cabbage with pork meatballs and vermicelli noodles and a Moon Festival Noodle Soup with big chucks of sometimes-fibrous lotus root. The final presentation was by the Golden Dragon Restaurant which demonstrated a dish called Lobster Yee Mein that started with a live-and-kicking lobster. The chef brought the lobster over to the sink area where he mangled the poor crustacean with a cleaver in true Anthony Perkins-style while the horrified audience looked on. Although the finished dish was attractive, I never saw a hungry crowd so uninterested in sampling lobster, but perhaps it was because they were busy attending to the sick and wounded.

The more I visit Chinatown, the more I love it. You can immerse yourself in the culture, from the ethnic groceries to the restaurants offering everything from the Americanized sweet and sour chicken to dishes featuring bull penis. I’ve got to make it a point to partake of what Chinatown has to offer more frequently than having to wait for a blue moon.