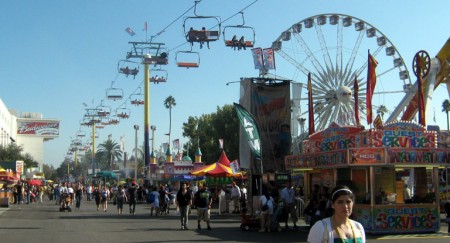 Part of the sprawling grounds of the Fairplex in Pomona

As it has for generations before us, the thought of the county fair evokes images of crisp fall air, candy apples and cotton candy, midway games and admiring the results of agricultural progress. It had been years since I took in a fair, having made regular visits to the Topsfield Fair in Massachusetts. In addition to rekindling an autumn tradition, I looked forward to enjoying the benefits of the food vendors’ penchant for devising more unusual and diabolical ways to transform junk food into deep-fried delights of Frankensteinian proportions. I agreed to meet friend Eddie Lin of Deep End Dining for an adventure of the senses which would undoubtedly include finding the most unusual food the fair had to offer. If you decide to attend, comfortable shoes are in order since the square footage of the fair is astounding – there were still areas I didn’t get to in the six hours I was there. As with most county or state fairs, there are multiple aspects to take in: the midway, where you can drop $20 to pop some balloons and win a stuffed bear; animal-based entertainment such as pig races and riding the mechanical bull; food to sample that makes the corn dog seem like haute cuisine; amusement park rides that while smaller in stature than the mighty steel and wooden track rollercoasters still aspire to free you of your equilibrium and your lunch; and, the traditional agricultural barns where you can gape at livestock and blue ribbon produce. 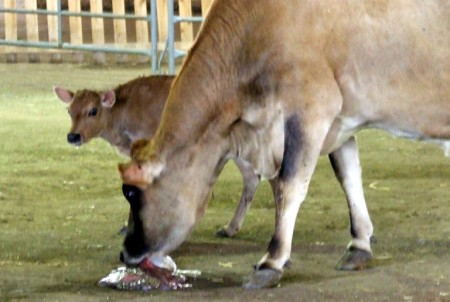 A cow eats her placenta after birthing the calf pictured

We decided to start at the livestock barn in order to work up an appetite and maybe pick out an animal or two to eat. In my personal and humble opinion, I believe that as carnivores we should have to look the source of our beef carpaccio or samgyeopsal in the face to truly appreciate where it comes from. The barn featured animal families, with pigs, oxen, sheep, chicken, goats and even yak birthing and caring for their young. In the center pen was a group of cows that had very recently calved – in fact, one of the cows whose infant was still struggling to stand on its wobbly legs was trailing a bloody, liver-colored placenta which plopped like a jellyfish from hell onto the dirt floor. What happened next astounded me – Elsie started chowing down on the brown blob. I knew that animals such as dogs and cats ate their afterbirth, but it never occurred to me that herbivores did as well. As bizarre and somewhat disgusting that was to watch, hunger was setting in and we wandered off to find fair food, making a point to bypass the McDonalds conveniently located just outside the barn. 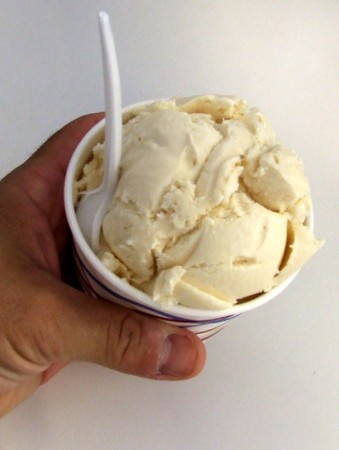 Our first stop was Dr. Bob’s Handcrafted Ice Creams, whose manufacturing and retail facilities are conveniently located on the fairgrounds in a red Western frontier-style building. I admit that I had never heard of Dr. Bob’s (started by California State Polytechnic University professor Dr. Robert Small in 1999) – Dr. Bob’s specializes in small batch, handmade ice cream using fresh and flavorful ingredients. I wasn’t cruising for the best strawberry, chocolate or vanilla ice cream I could find – I wanted something more on the trippy side.  I was ready to turn on my heels and look elsewhere when I saw the paper sign taped onto the menu of flavors that simply read, “soy sauce”. The thought of a creamy mouthful of salty soy both frightened and intrigued me, resulting in ordering a “small” scoop that turned out to be about the size of an average human head. The taste was unmistakable, yet the saltiness was toned-down by the high butterfat content of the cream. Tamed by the sweetness, I was able to enjoy the flavor of the soy sauce, but I had to pace myself since I knew I would be encountering other delights that I had to try. 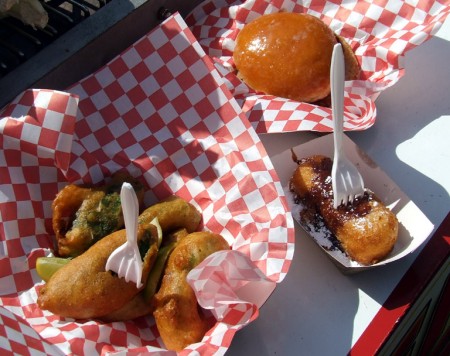 Fighting off my carnivorous instinct, I forced myself past the vendors smoking and grilling armies of turkey legs, kielbasa and sausages, all of which looked and smelled amazing. We wound through a labyrinth of carnival games, rides and hot dog and burger booths until we happened upon a stand that had the appearance of a sideshow – Chicken Charlie. Huge signs advertised the deep-fried delights being offered below: s’mores, Twinkies, frog legs, White Castle burgers, Oreos, Klondike Bars, avocados, and the frightening-sounding Krispy Kreme chicken sandwich. Charlie Boghosian’s has been clogging fairgoers’ arteries since about 1983, and I was having a difficult time figuring out what I wanted for a last meal before being rushed to the cardiologist. I settled on the avocado, since I was deprived of the fried fruit offering which was somehow overlooked at the previous day’s visit to the California Avocado Festival; Eddie chose the fried Twinkie and walked on the wild side with the Krispy Kreme chicken sandwich. The fried avocado was absolutely delicious – the perfectly-ripe fruit was soft, creamy and warm, surrounded by a crunchy outer crust of fried batter that sealed in the flavor without taking away from it. I had a bite of Eddie’s Twinkie (I am now regretting not re-phrasing that) which was crispy on the outside, but had a thinner outer layer than the The Dessert Factory’s. Chicken Charlie preps their fried Twinkie an egg dip with a roll in flour before frying, as opposed to coating it in funnel cake batter as they do at The Dessert Factory; in either case, the result is similar – the sugary core melts into warm confectionary goo that drastically improves the Twinkie’s taste. The KKCS was a frightening abomination that Luther Vandross would have been proud of – a deep fried, breaded patty of white meat chicken, nestled between the bisected halves of a Krispy Kreme jelly donut. The chicken was less than spectacular yet satisfactory for county fair fare, but the sugar from the donut’s glaze and jelly filling put my head in a glucose-induced tailspin, and I only had one bite. 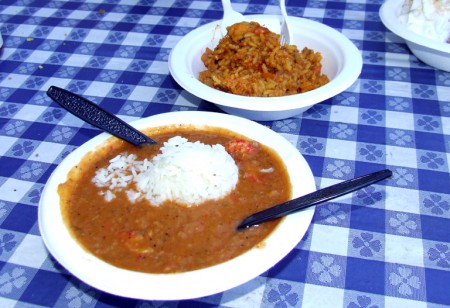 Crawfish etouffee and jambalaya from Harold and Belles

As stomach churning as the Tilt-A-Whirl was for previous generations, the rides at the LA County Fair seemed to have escalated brain scrambling and vomit-inducing to a higher level. Mechanical arms lifted clusters of chairs to a dizzying height where they are then rotated rapidly in every possible direction, a recipe for quick fried avocado removal to be sure. We were satisfied to watch the torture from a safe distance, but then set out in search for additional food. We hit an area of the fairgrounds called Pirate’s Life that was set aside as a pirate cove featuring performances by members of the group Pirates For Hire (included an all-pirate band playing shanty songs on acoustic instruments). On Captains Jack Sparrow and Hook’s recommendation we ended the day’s food consumption with some crawfish etouffee and jambalaya being served at Harold and Belle’s mobile restaurant. The etouffee was a little short on mud bugs, and the rice in the jambalaya was slightly overcooked, but the food was tasty and had the perfect level of spice to make it flavorful without being uncomfortable.

I left with a renewed appreciation and love for the traditional rite of autumn that is a visit to the county fair. There’s something for everyone, and you will almost certainly be surprised by something you’ve never experienced before (or thought you would). There are things that will intrigue you, and things that will make you shake our head in disbelief, but in the end it works out to be pretty fair.

4 Responses to Fair and Sunny