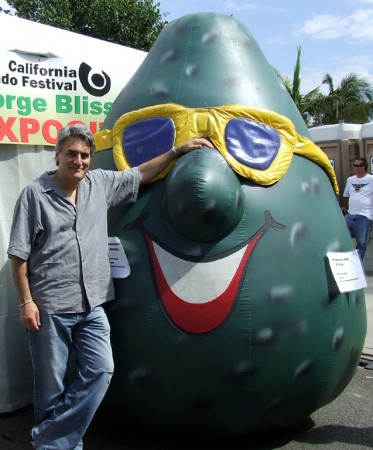 A face only a urologist could love (his, not mine)

The ever-popular avocado originated in Puebla, Mexico, where the family patriarch can still be found locally in the form of the small, black, gourd-shaped fruit called “criollo”. The Spanish were the first to introduce the “alligator pear” to other temperate and tropical regions of the world, with its now familiar English name appearing sometime in the 1600s. The original name “ahuacatl” comes from the Nahuatl word for testicle (as a result of the fruit’s shape and hopefully not its size or taste); it was originally eaten as a fertility food. The Nahuatl word for “avocado sauce” was ahuacamolli, the word from which “guacamole” was derived. The Spanish still refer to the avocado as “aguacate”, which is also the sound my alarm clock makes whenever I visit Bogotá, Colombia (actually  the street vendor with the avocado cart shouting out his product at 7 AM). Avocado has been cultivated and bred into a wide variety of shapes, sizes, colors, textures and tastes, with the Hass being the most popular (because of its high yield and year-round productivity). The source of the Hass avocado was a tree patented in 1935 that was cultivated by Rudolph Hass of La Habra Heights, California, outliving its cultivator by 50 years only to be cut down in 2002. 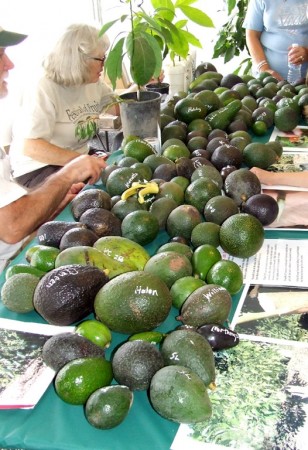 More varieties of avocado than you can shake a stick at

Today, approximately ninety-five percent of the avocados grown in the U.S. come from Southern California, with Fallbrook (in San Diego County) being the undisputed “Avocado Capital of the World”. Santa Barbara County is the third largest producer, and so not to be outdone by Fallbrook they’ve hosted their own Avocado Festival in Carpinteria since 1986. The annual festival draws close to 100,000 people over three days at the end of September each year and takes up most of Carpinteria’s main downtown street (Linden Avenue). In addition to the shops featuring avocado themed items, there are three stages set up along the street where bands perform a variety of genres from Latin salsa to punk and tented booths in the street selling the typical items you’d expect to find at one of California’s larger food festivals (akin to the Gilroy Garlic Festival, Castroville Artichoke Festival and Paso Robles Olive Festival). The “must-see” of the event is what is billed as “The World’s Largest Bowl of Guacamole”; this plastic vat holds the rich, green glop made from over 2,000 avocados. The guacamole is sold as a fundraiser for the Carpinteria High School Warriors football team and although when pressed they will readily admit that they no longer hold the record, there is no denying that having that mother lode of dip at your party will require a dump truck full of chips. At the time they actually held the official title in Guinness Book of World’s Records, they qualified with a respectable tub weighing in at 4,011 pounds, 12 ounces. The most recent record holders are culinary students from four Miami-area high schools who broke the record in 2009 with a vat containing 4,114 pounds of guacamole. Since bobbing for avocados seemed out of the question, I started thinking about finding some unique culinary treat that would be a departure from mundane chips and guacamole. My prayers were answered when I saw a sandwich board outside Pacific Health Foods advertising avocado smoothies. The preparation area for Pacific Health Food’s beverages is located at the back of the store – out front the sign said “smoothie” but in the back it read “shake”. I was beginning to think I was falling victim to the old “bait-and-switch”, but discovered that like the avocado itself, the drink goes by many names. The pale green smoothie was thick enough to stand the straw up – it was neatly blended with avocado, buttermilk and vanilla ice cream. The buttermilk gave the drink a slightly sour taste, but it was still refreshing and filling. 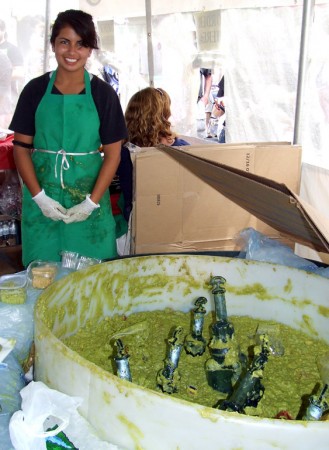 No longer a record holder, but still one big vat of guac

The obvious avocado offering of choice by many of the food vendors present was “insert name of common food item here” topped with guacamole. We walked around awhile looking for something else substantial yet unusual, but settled on the tri-tip sandwich with guacamole being sold by the Lions Club after seeing diners walk by with the mouth-watering dish. The tri-tip was tender and smoky, and was complemented by the avocado, fresh salsa and the soft, ample roll. Although Yankee Doodle Bakery’s tent featured a large sign advertising their avocado teacake (a popular specialty made only for the avocado festival), each time we swung by they stated they’d have samples “within an hour”. Both Cold Stone Creamery’s booth and local ice cream shop Rainbow Ice Cream and Yogurt were offering avocado ice cream; the long line and price of Cold Stone’s ice cream was prohibitive so we got a small cup from Rainbow. In sharp contrast to the avocado smoothie, the ice cream had more of the taste of sugar and cream than avocado; it wasn’t offensive but I wish it had somehow better represented the flavor of the fruit. After hitting Rainbow we walked next door to CJ Produce, a tiny grocery that had fresh, locally grown avocado in addition to fresh nopales (cactus pads), guava, chayote and baby bananas. 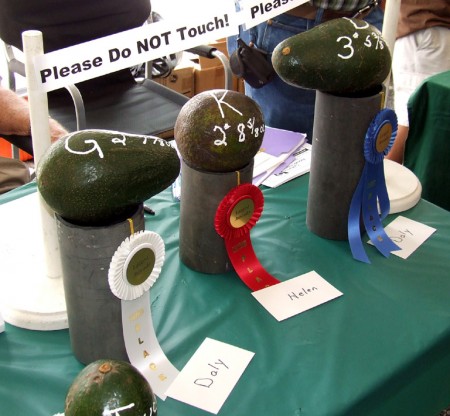 The three largest avocados with the variety on the card

I was somewhat disappointed that avocado was not featured more prominently at the vendors’ booths although the 50-foot tall, fruit-bearing avocado trees that lined the city streets were a constant reminder of the festival’s theme. A huge tent labeled “Avo Exposition Center” blocked the northern end of Linden Avenue; it was guarded by what looked like an inflatable testicle with sunglasses and housed a mini-museum with experts on hand to talk about the cultivation and production of avocados. One table displayed the winner and runners-up of an avocado contest in which size mattered – the first prize went to a mammoth 3-1/2 pounder. The back wall was covered in “avo art” with decorated avocado skins and shoebox dioramas featuring what appeared to be fresh “Mr. Avocadoheads”. A group of avocado growers sat at a table covered with every imaginable variety of avocado, conveniently labeled in Wite-out for easy identification and they answered questions regarding all things avocado (for instance, does the Bacon variety taste like bacon?). Various stands along Linden Avenue sold fresh, locally grown fruit, and it was difficult trying to decide which variety to buy (although one basket labeled “Experimental – $.75 Each” just seemed to invite trouble).

I was skeptical about the attendance estimates of the festival, but as dusk approached the streets were packed with wall-to-wall festival attendees who had come to enjoy the food and music that has come to be a popular destination for the past 24 years. I highly recommend the free event at least once, where you can introduce yourself to the variety of texture and taste of the different avocado breeds and sample avocado-enhanced foods; just pace yourself so you don’t end up going home with Carpinteria.