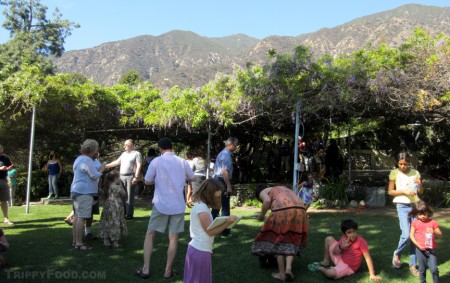 The canopy near the source wistaria vine

Usually the title of “world’s largest” as it relates to botanical wonders is relegated to the massive trees of the Pacific Northwest; however, there is a Chinese wistaria (Wisteria sinensis) growing on the cool slopes of the San Gabriel Mountains in Sierra Madre, California, which holds the distinction of being documented by Guinness Book of World Records as the world’s largest flowering plant. The wistaria (an alternate and oft-claimed accurate spelling of what is commonly known as “wisteria”) is said to have been purchased by Alice Brugman from the Wilson nursery in Monrovia for 75 cents back in 1894. At the time, the sprout was transplanted from its one-gallon pot to a spot below the Brugman’s front porch; eventually the vine enveloped the 2-story home, where the weight of its limbs eventually collapsed the property.

The commercial part of the festival on Sierra Madre Blvd.

Today, the behemoth boasts statistics of epic proportions – spanning an acre over two private properties, the weight is estimated to be in the vicinity of 250 tons, with branches that stretch out over five hundred feet. The wistaria is a fast-growing vine when it awakens each spring, with a growth rate of between a half-inch to an inch an hour; the 1.5 million fragrant blossoms can be smelled blocks away during the height of its March bloom. Although the aromatic colossus thrives in the rear of the two properties, the home owners graciously open their garden gates one day a year free of charge to those wanting to witness nature’s majesty. 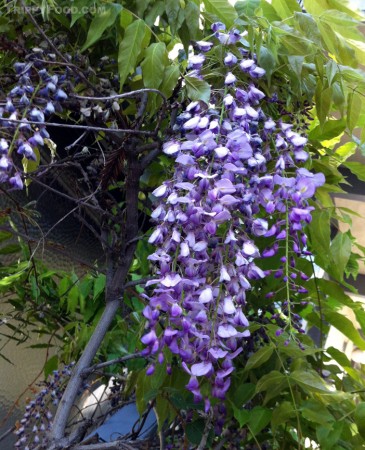 Beautiful foliage of the Chinese wistaria

The open house coincides with the annual Sierra Madre Wistaria Festival, which for the most part is held downtown, commencing at the intersections of Sierra Madre Boulevard and North Baldwin Avenues. The festivities feature everything you come to expect from a California street fair (such as the Carpinteria Avocado Festival or the Castroville Artichoke Festival) – live music, craft vendors, food booths and trucks, etc. Expect long lines to get into The Only Place in Town, or for Mother Moo to run out of your favorite flavor early in the afternoon. Getting to where the vine is located is easy – you can pay the twelve dollars for a round-trip haul in an air-conditioned shuttle, or if you’re up for a mostly uphill one-mile walk you can go it by foot. Don’t expect to be able to get near the vine by car, as most of the streets are blocked to all but resident traffic. The key directions to remember are heading north (up the mountain) on North Baldwin Ave and banging a left at West Carter Ave – if the line snaking around the corner of West Carter and North Hermosa Ave doesn’t give the location away, follow your nose. 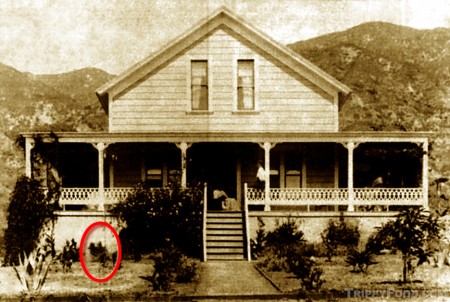 Once you are greeted and enter, it becomes apparent exactly how big the vine is, forming a canopy that is punctuated by places where the plant dropped roots or where it is propped up by metal posts. As you take in the beauty of the lavender blooms and the intoxicating fragrance, remember that you are there to marvel at one of the 7 Wonders of the Horticultural World and don’t lose sight of the fact that the residents have convivially invited you into their yards – stay on the paths, and try not to linger too long so that others can enjoy the rare glimpse at this amazing plant. 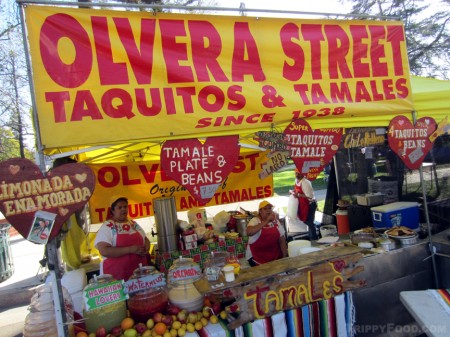 Because no wistaria festival is complete without tamales

Take the opportunity to have some fun and be floored by Mother Nature at the 98th annual Sierra Madre Wistaria Festival on Sunday, March 15 2015 – it’s an Instagrammer’s dream, but you just might want to do a Vine instead.