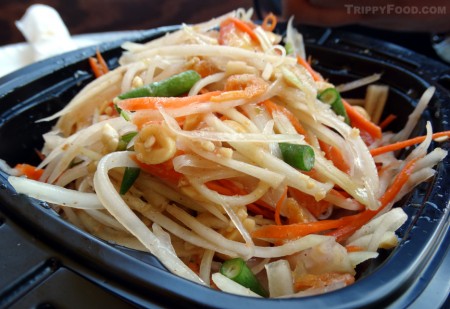 Papaya salad – like the green tree viper, beautiful and deadly

A row of carports tucked into a bamboo and umbrella-shaded corner of a parking lot in an industrial swath of Los Angeles is not the first place one would think to look when searching for authentic Thai street food in the Southland; most die-hard fans of Mae Ting’s Coconut Cakes have likely stumbled upon it accidentally while stocking up at LAX-C (the Thai version of Costco). While the steam tray “trust the chef” spread inside LAX-C may satiate the weekend shopper, the easy to overlook stall in the shadow of a gutted concrete building is where the action is. As the name implies, Mae Ting’s Coconut Cakes (kanom khrok) are the sweet and airy treats that bring gastronomes across the lot. The warm, comforting aroma of toasted coconut reaches your nostrils before you hit the counter; there’s always someone standing over what looks like a flat iron Aebleskiver pan gently coaxing the rice and coconut batter into a saucer-shaped disk. Instead of turning the diminutive cakes, they are tended until golden brown on the outside and sticky on the inside and then placed together to where the wispy orbs dissolve on the tongue in an orgiastic moment of coconut bliss. 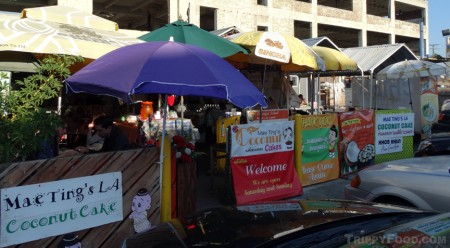 The lure of the kanom khrok is so strong that it prompted Los Angeles’ reviewer laureate Jonathan Gold to sing its praises in a long-faded article posted on one of the walls of the stand; it’s unfortunate that Mr. Gold only touted what is essentially the tip of the iceberg. For food adventurers, the coconut cakes are simply a come-hither that entices you into the stall. While Mae Ting’s doesn’t have an extensive menu, they do offer exceptional street fare with home-cooked flavor at a budget price. Hot steamy fish balls, powerful and savory mu ping (pork skewers) – not a mundane or underwhelming dish in the house (or what looks like the garage). 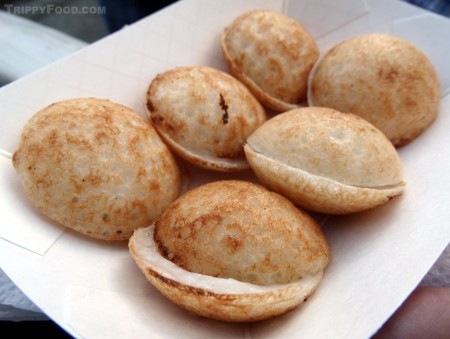 If it’s the kanom khrok that coerces you across the parking lot past a fish pond where a sidewalk belongs, make them your appetizer because the big man on campus that puts a smile on your face and then smacks it off with a flaming glove is the som tam (an incendiary green papaya salad). I mean no disrespect when I suggest you try not to look too Caucasian when ordering said flammable – the staff is concerned with your well-being and it could take a while to get an ambulance on-site if you order the papaya salad “very spicy”. Expect them to ask who will be eating it and then sizing you up to determine if you can handle the burn. As you fork the fresh slaw into your eager mouth, a variety of flavors and textures do a dance on your taste buds – tart dressing, nutty and salty bits, crunchy fresh fruit and vegetables; you barely notice the staff armed with cups of water and a fire extinguisher standing at the ready. 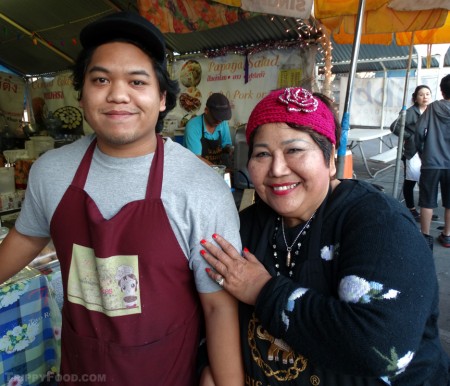 The flavor is intense, and as you prepare for your second bite, the demonic flames of hell start in your throat and work their way backwards – you can tell exactly where every lump is on its way down to the basement. Sweat drips from your forehead; you are unable to form words. You realize too late that those crisp green beans weren’t. Quenching the flames is an exercise in futility; water simply washes away the taste and leaves the heat. After succumbing to this new circle of Hell and trying to extinguish your case of dragon’s breath, you begin to actually crave the fresh and powerful flavor and shovel in another bite, and adventure in pleasure and pain.

Mae Ting’s is a must, and even if the coconut cakes are the draw, try the other menu items and don’t leave without taking on the papaya salad. The stand is only open on weekends and not all day; you can usually find Mama Mae Ting in the house, and while she is as sweet as her kanom khrok, there’s always a spark in her smile.