Lucia, You Got Some ‘Splaining To Do 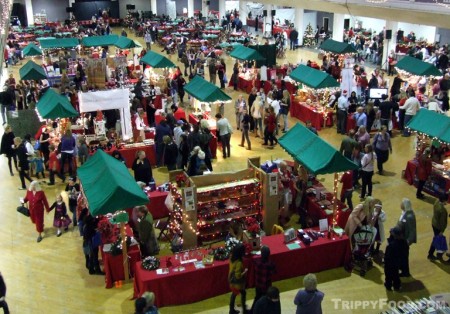 Back in 1979, Manhattan Beach, California resident Agneta Nilsson decided to host a Christmas celebration in her home for Swedish friends and relatives. The event became so popular that it had to be moved to larger venues and has not only become a tradition in Southern California, but worldwide. Nilsson founded the Swedish Women’s Educational Association (SWEA) as the benefactor of the annual fundraising event that is held every year on or around December 13, the Christian feast day of Italian Santa Lucia (Saint Lucy). As part of the celebration (held since 2007 at the Los Angeles’ historic 1926 Shrine Auditorium) the Swedish tradition of a procession of light that dates back to the 1700s has been an integral part of the event. A young woman is chosen to portray Santa Lucia, who leads a column of girls in white dresses and carrying a single candle each while singing Teodoro Cottrau’s Santa Lucia. The girl portraying Lucia also wears a wreath of lit candles in on her head symbolizing both the flame that could not burn Santa Lucia and light during the time of year in Scandinavia where the days are almost totally dark. At the 2010 event I attended with friend and fellow food writer Eddie Lin, Swedish singer and songwriter Emma Ejwertz (who led the chorus in traditional Swedish and American holiday songs) portrayed Lucia. The voices of the choir filled the hall with the sound of angels; the singers in the pageant are trained each year by choirmaster Lina Pasqua. 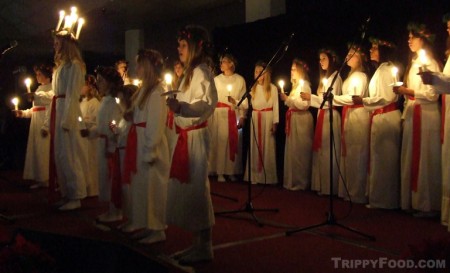 In addition to the festival of light, booths and carts selling imported food and gifts as well as hand-made items were set up on the front half of the main floor. It’s your one stop shopping destination for Advent stars, wooden ornaments, Swedish ales and glögg, baked goods and holiday linens, but wait, there’s more – there were a few stalls selling what looked suspiciously like the types of items hawked by Ron Popeil on late night television commercials. The stage where the raffle and festival of light were held was placed at the back of the hall with large, round communal tables covered with red and green tablecloths set up in front of it for dining and watching the performances. The cloth table coverings (festive as they were) seemed a bit out of place, as the available food was served on Styrofoam or paper plates with plastic utensils. 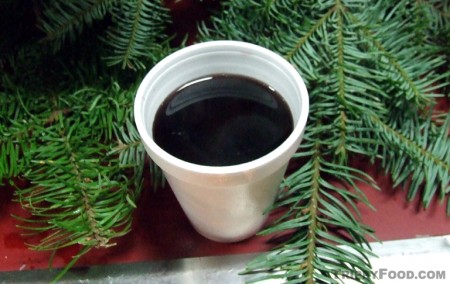 The food was mostly homemade, with the vendors lined up along the far right wall. Each food vendor had its own line, but it was slightly confusing as many of the patrons thought that the line at the first food booth serviced all the booths. The first two large covered booths sold Zoégas Swedish coffee (which is said to be the national drink of Sweden, a fact that must frustrate Swedes since the climate is too cold to grow coffee) and baked goods including freshly made cakes and cookies; just past these was the bar where your average American mixed drinks were available in addition to glögg for five dollars a cup. Glögg is a mulled wine beverage served during the holidays that will warm your innards and dull your senses – it is insidiously sneaky, posing as a hot, sweet beverage but could result in bizarre acts involving elf costumes and live reindeer. The glögg being sold was made from scratch, blending port and burgundy wines with cinnamon, sugar, cloves and cardamom, and then garnished with raisins and almonds. It was sweet and spicy and after half a cup I wanted to go outside and shovel snow (which is close to impossible in downtown Los Angeles). 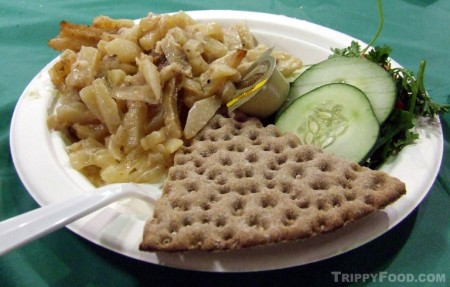 The first substantial food booth featured a Swedish meatball platter with boiled potatoes, lingonberry sauce, brown gravy and a very basic salad; an open-faced shrimp salad; and a traditional Swedish dish called Janssons frestelse (Jansson’s temptation). Annie Andersen’s sinful-sounding Jansson’s temptation was a casserole-style dish made with potatoes, anchovies, butter, cream and onions that had the texture of a baked macaroni and cheese. The potatoes were still firm but with creaminess and an earthy kick from the anchovies. It was a delicious cold weather dish, but I wasn’t clear on the temptation aspect of the name. The second food booth had a single item, simply billed as “hot dogs”. This was obviously not the best marketing strategy, since after conversing with the cook we discovered that these were, in fact, wieners. Although Sweden manufactures their own wieners, the ones being hawked with the casual abandon of ballpark franks were imported from Germany with natural casings that provide a satisfying snap with each bite. In addition to the “hot dog”, you could also purchase a lingonberry drink, but if you missed this year’s event, fret not – you can stock up at your local IKEA. 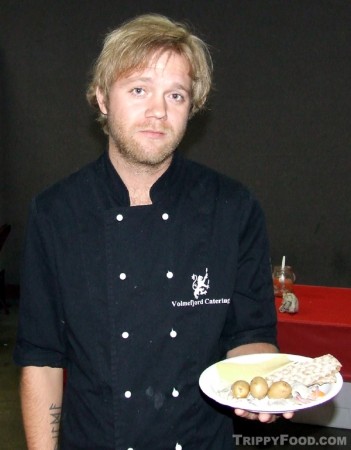 Food Booth #3 was hosted by the Los Angeles Church of Sweden, offering the ever-popular Swedish pancakes and a fragrant, thin pea soup containing shredded carrot, but we bypassed those delights for the hard-core Swedish fare at Volmefjord Catering‘s booth. There was no line at their booth, which was tucked into the far corner of the auditorium, yet they seemed to have the most interesting dishes available. We turned down a very colorful open-faced red beet salad and meatball sandwich that looked more like art than food and an equally decorative gravlax sandwich with a mustard sauce for the holy grail of Swedish cuisine – the herring plate. This plate featured three different preparations of herring and a generous slice of Västerbotten cheese. Chef Andreas Volmefjord started with the basic herring aged in vinegar and then using the same fish added a cream sauce to one batch and a mustard-based sauce to the third. The standalone herring was only slightly sweet with the distinct taste of the fish slightly muted by the pickling; the cream variety was cool and smooth and the batch with the mustard sauce was slightly spicy with out being overpowered. The plate came with a slice of knäckebröd (crisp Swedish flatbread) that tasted astounding when topped with a little of the herring and a nibble of the cheese. 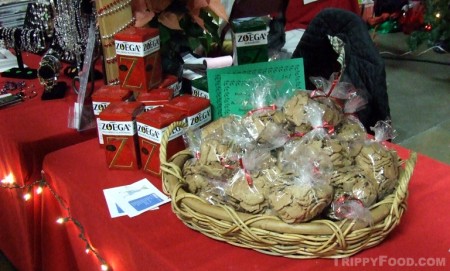 After recently attending a Norwegian lutefisk dinner and the annual Swedish Christmas Fair, I have developed a newfound appreciation for Scandinavian culture and cuisine and am grateful that this is available about as far from the region as you can get in sunny Southern California. I hope to experience more of what Denmark has to offer besides what I’ve encountered in Solvang, California as I work towards the Finnish.

NOTE: Admission to the SWEA Swedish Christmas Fair was provided by the event’s organizer. The content provided in this article was not influenced whatsoever by the organizer of the event