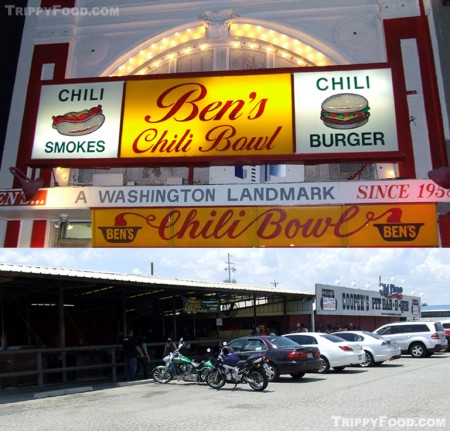 Checking out a restaurant that has been visited by a U.S. President comes complete with a variety of risks, including whether the food lives up to the hype and if an hour-plus wait in line is worth it in the long run. Bill Clinton made it easy – the answer to both of those questions regarding his penchant for fast food is clearly “No”; however, two places where both of these referendum questions receive a unanimous “Yea” vote are Cooper’s Pit BBQ in Llano, Texas (just north of Austin) and Ben’s Chili Bowl in Washington D.C. Both restaurants have been around for over half a century and have had their share of celebrity visits, and the legendary quality of the food has prompted long lines at both for decades. People will be arguing for decades who was a better president, George W. Bush or Barack Obama, but one thing is for certain – the clear winner is the diner who visits Cooper’s or Ben’s Chili Bowl. 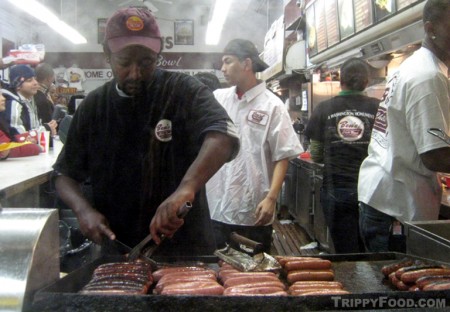 We’ll start with Ben’s, a tiny restaurant with a diner atmosphere opened by Ben and Virginia Ali in August of 1958. The restaurant is on a stretch of U Street in Washington D.C. formerly known as “Black Broadway” because of its association with the musical and theater arts. Built next door to the Lincoln Theater, the restaurant has had numerous visits throughout the years from the likes of Miles Davis, Martin Luther King Jr. and Bill Cosby; it was one of the few buildings that escaped the fury of the 1968 riots following the assassination of Martin Luther King, Jr. Ben’s had experienced fluctuating popularity over the years but it was a visit from President Elect Barack Obama in January of 2009 that turned Ben’s into an international phenomenon. According to the staff at Ben’s, Obama arrived with Washington D.C. Mayor Adrian Fenty in tow, requiring the front doors to be locked with the patrons still inside. The newly elected president sat at one of the tiny tables and ordered a half-smoke (a spicy smoked sausage composed of half beef and half pork and then grilled) with chili. 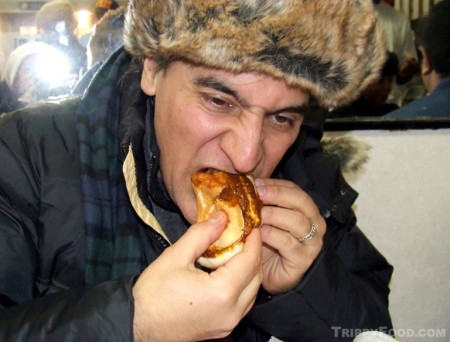 Knocking back a half smoke with chili and cheese

On my visit (about two weeks afterwards) the line stretched out into the 20-degree cold and ran down to the end of the block. The man standing in front of me in line admitted that he was a frequent patron, and although he told me what Obama had eaten on his visit, I asked him what his recommendation was – apparently, he always orders the half-smoke with chili and cheese, which sounded pretty good to me. While Claudia waited in line to order I grabbed the first available table I could find, still littered with the previous diner’s refuse. The staff member who cleaned the mess up said to me, “You’re sitting at his table”, pointing to the Presidential Seal on the mirror behind me. I was not only sitting at his table, I was sitting in his seat, but I didn’t think he’d be popping in to kick me out any time soon. The sausage was delicious – hot and hearty, the grilled casing having just the right snap and the coarsely ground meat inside providing a nice chewy texture. The soft bun soaked up a considerable amount of the juices from the chili and the whole thing was a rich, glorious mess. Ben’s can be considered “doubly presidential” after having recently served France’s President Sarkozy and his family there. 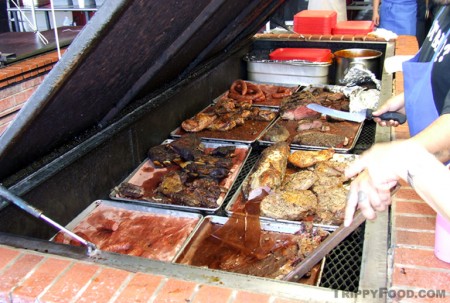 A variety of meats straight from the pit

Cooper’s Pit BBQ in Llano, Texas was actually the second restaurant to be opened by the Cooper family; George Cooper opened the original BBQ joint in 1953 in Mason, Texas (it is still opened, but no longer affiliated with what is becoming a chain). George’s son Tommy opened the second location in Lake Buchanan (which later moved Llano) and ran the place until his death in a hunting accident; at that time the business was sold to Terry Wooten, who had worked there as a teenager. Cooper’s had long been a word-of-mouth experience in Texas’ Hill Country – since the pits are fired up early in the morning, it’s not uncommon to find huge lines waiting outside for the lunchtime opening (when the meat is gone, it’s gone). George W. Bush frequented Cooper’s in Llano (the Spanish word for “plain” but pronounced locally as “Lan-O”) while he was governor of the Republic of Texas and photos from his frequent visits can still be seen on the wall (near the sign reading “Free BBQ Tomorrow”). In fact, W enjoyed the cuisine at Cooper’s so much that he had it flown to the White House (and hopefully he didn’t wipe his hands on the curtains in the Lincoln Bedroom). 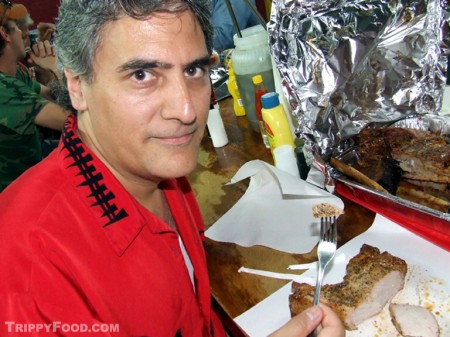 That is one tasty pork chop

After you claim a parking spot and head towards the line you’re hit with a wall of smoke coming off the pits. As you get up to the front, the grillmaster will open the top and you simply point to what you want amidst a gathering of brisket, sausages, ribs and pork chops the size of your head. You can get an optional dunk in the watery BBQ sauce before your choices are placed on butcher paper on a plastic tray and you are directed inside. The inside staff takes your order, weighs it, cuts it into manageable pieces and puts it back on the tray (you should probably ask for extra butcher paper “plates”). While you’re waiting in line you can choose your sides (the potato salad is firm and not heavily mayonnaise-laden, but the corn on the cob is generally overcooked) and get some of their freshly baked berry or peach cobbler for desert (an optimistic move to be sure). Jalapeno pinto beans are free and available in a large crock where you pick up your silverware; their vats of homemade sweet or unsweet tea provide a refreshing beverage to complement the meal. You need to be socially outgoing at Cooper’s since dining is communal-style at indoor picnic tables – each table is stocked with condiments, paper towels and the obligatory loaves of white bread. My personal favorite is their pork chop, a 3″ thick meat monstrosity that is juicy, smoke-permeated and packed with flavor.

Since their presidential visits, you can now have meat from both locations shipped anywhere in the U.S. via their websites. Ben’s Chili Bowl and Cooper’s Pit BBQ are two places where carnivores are the majority party; whether you are Democrat, Republican, Independent, or Bull Moose, when you visit either you’ll find yourself reaching across the aisle, if for no other reason to request a napkin.