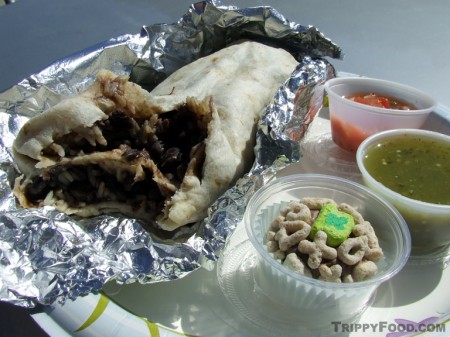 Albert Einstein… Alexander Graham Bell… Thomas Edison… Leonardo Da Vinci… geniuses, right? Wrong. Lucky idiots, the whole lot of them. Time/space theorem, the telephone, audio recording, helicopters, hell – my nephew in 4th grade could do that in about 20 minutes. But I’ll shine light on true genius for you: Brazilian street food truck Ta Bom taking Brazil’s national dish (feijoada) and rolling it into a burrito. Some day in the distant future, archeologists will unearth a stone monument to the feijoada burrito and remark about all the teeth marks covering the statue. I don’t know how Ilse Marques and daughters Jackie and Julie did it, but they came up with the ultimate, perfect burrito. For the uninitiated, feijoada is a slow-cooked stew of beans with a variety of meats (usually bits of beef and pork), mildly spicy, rich and slightly salty. For Ta Bom’s hearty dish, black turtle beans make up the plentiful base, flavored with dried, salted beef and pork sausage chunks. Feijoada is usually served with various small side dishes (which are more of accompaniments) with rice being the bare minimum. Now pack that all into a large rolled flour tortilla and you have the perfect burrito. I can’t figure out how nobody has capitalized on this dish before, but I give thanks to Christ the Redeemer that Ta Bom has. 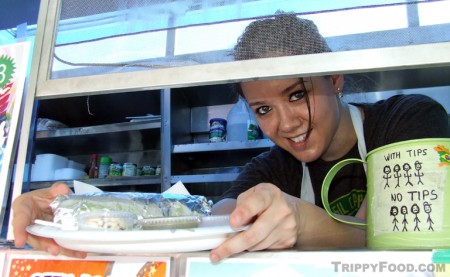 Service and a feijoada burrito with a smile

The burrito itself is about the size of Popeye’s forearm, so there’s no need to think about what sides you want with it. It is a self-contained meal, with the only accent required being some of Ta Bom’s feisty green salsa or Brazilian vinaigrette salsa. Even though the feijoada is soaked with its own natural juices, the sturdy tortilla transforms what would normally be wet work into a neatly wrapped hand-held meat and bean torpedo. I half expected the burrito to self-destruct, but it held together wonderfully and there was no waste, leaving me to wonder how I was going to have room for the brigadeiro rolled in Lucky Charms in anticipation of St. Patrick’s Day (and I don’t mean the season opener of the Sydney Football Club). I asked for a tasty beverage to wash it down, and since I had the Guaraná Antarctica soda (another somewhat “national” food of Brazil) on my last visit, I opted for something new. While still naturally guaraná flavored, I sipped on a cold, frosty can of Guaraná Brazilia which had more of a fruity taste and was less sugary than the Guaraná Antarctica. 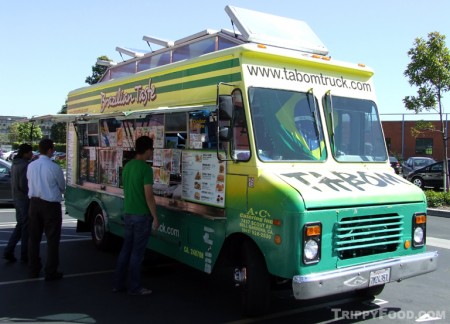 The Little Green Truck That Could

I’m waiting for something off Ta Bom to suck, but that worry seems needless and silly at this point. I now have a valid reason never to step foot in another Chipotle Mexican Grill, but now I’m faced with the dilemma of having to hunt Ta Bom down every time I crave a burrito. Their feijoada burrito packs a common taco shack staple with explosive Brazilian flavor and brings a national favorite to the streets of Los Angeles County in a convenient “to-go” format. I wonder if they deliver…

NOTE: This cost for this meal was provided by Ta Bom. The content provided in this article was not influenced whatsoever by the truck’s staff.