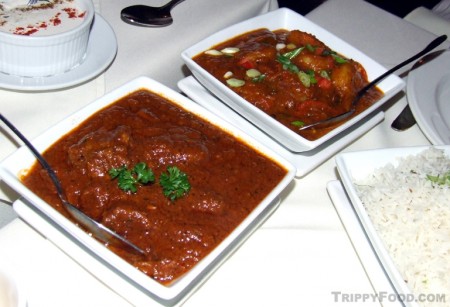 Someone walking into Haldi Root unaware that the name of the restaurant is derived from the Hindi word for the root of the turmeric plant (which when ground produces a spice commonly used in South India) may not know they’ve entered an Indian restaurant. The decor certainly doesn’t give it away – there are no cultural sculptures or paintings on the walls; the room is decorated in a simple elegance with fabric dangling from the ceiling. You could make an educated guess that you were in an Italian restaurant based on artificial grapevine-covered brickwork at the far end of the dining room, and you would be partially correct. Executive Chef Sanjay Kumar studied cooking in Austria, where he learned European cuisine as well as Indian. He has worked in restaurants in Europe for over 18 years, which is reflected by Haldi Root’s Italian menu. Although Italian items were available, I had been invited to sample from the Indian menu and I didn’t want to be distracted. 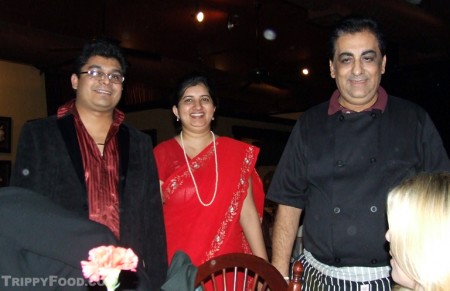 Initially a tiny aloo tikki was brought out that had the consistency of a fritter or crab cake; it was packed with the flavor of potato with a hint of spice, but I wondered if it really needed the black and green olives skewered on a toothpick and flying full mast above the fried cake. The appetizer was brought out with a tiny bowl of tamarind sauce, as well as a cup of mint chutney sauce (which found their way accenting some of the other dishes). A mound of chili chicken was brought out – it looked a bit like kung pao shrimp, and although chili is a main component it wasn’t very fiery. The diced pieces of what seemed like celery were cut into sizes similar to the chicken, and although some of the diners said the chicken was crunchy it seemed to come from the vegetable. This is one case where the chicken didn’t “taste like chicken” – it seemed to be there for the texture, but the savory tomato-like flavor was enjoyable. I loved the presentation of the lamb chops, which were trimmed down to lamb pops – they were arranged on a platter like alien remains or an enchanted forest; however, they seemed a bit dry. 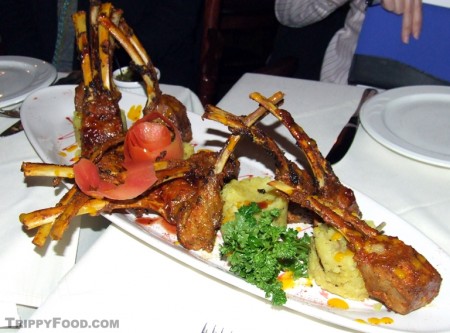 An alien-looking rack of lamb chops

The chef more than made up for the chops with a lamb curry dish – it was stout, yet subtle and breathy and the lamb melted in my mouth. Considerate of my fellow diners, I ensured there was enough to go around before ladling more on my plate. The shrimp masala blew me away – it was cooked in a spicy red curry and tasted almost like a milder Camarónes Del Diablo and by far my favorite dish of the evening. A vegetable korma featured chunks of carrots and apparent bits of lima beans, but overall had a flavor and consistency of a pureed summer squash. The yellow daal appeared to be vegetarian (if there were any meat remnants in it they were to fine to be identified; lentil lovers would appreciate this hearty dish). 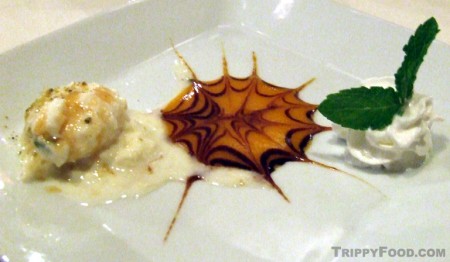 Dessert was simple – ras malai, a simple glop of paneer with cream, sugared whipped cream with a mint sprig and a mango/chocolate sauce in the middle of the plate made into the shape of a spider web. The chai tea with milk that accompanied it had a slight cinnamon/cardamom flavor, but could have used a bit more spice; regardless, it was a nice finish with the dessert. Chef Kumar came out to talk with us after the meal along with the restaurants owners and although I was focused on the Indian cuisine that evening he piqued my interest in the Italian fare. I’m branching out in regards to other genres of late and Haldi Root was a nice foray into Indian food. Overall I enjoyed the meal, so you can go forth and give the restaurant a try, assured that these words are not intended to curry favor.