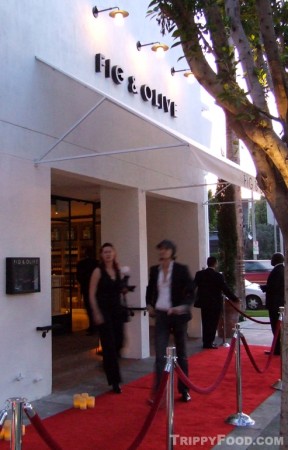 The newly opened Fig and Olive in West Hollywood

Having escaped a hangover after having attending the 5th Anniversary party at Ford’s Filling Station in Culver City, I braced myself for what undoubtedly would become one of the culinary social events of the season – the opening party for Fig & Olive’s newest location in West Hollywood, California. Fig & Olive’s fete was held with all the pomp and glory of any other Hollywood premier, right down to the red carpet and velvet ropes at the entrance. The restaurant has four locations in the New York area, and the West Hollywood site is the start of an expansion that will undoubtedly be international. The area is spacious, with an indoor balcony/bar area; the main dining area is centered on a single olive tree framed by rosemary shrubs and one wall is completely populated with back-lit shelves of their signature olive oil. A small glassed-in private dining area also features some small olive trees, but no matter how hard I looked (and asked) there wasn’t a single fig tree to be found. For the third of three opening night events (featuring a southern French theme), the tables and chairs were removed from the main dining area to accommodate the teeming masses in attendance. 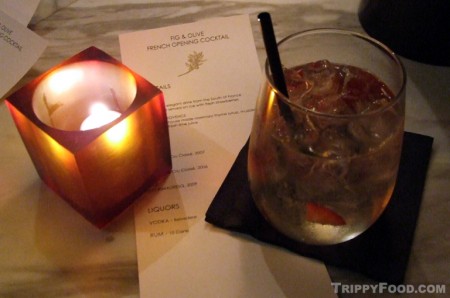 A group of VIP diners ate in the aquarium, while the mostly-media revelers noshed on hors d’oeuvres, with crostini being the medium of choice for the evening. This included crushed tomato with olive oil (which because of its orange-pink color was frequently mistaken for salmon); chopped bell pepper with ricotta cheese, fig paste with “special almonds” and blanketed by a triangle of Manchego cheese; prosciutto on a ricotta spread topped with a fig segment; a bresaola (which oddly tasted a little like fried bologna) with goat cheese and black olive; the ever-popular salmon with ricotta and cilantro; a tomato slice topped with charmoula sauce and a single boquerone (sardine); and a pile of crimini mushroom with artichoke, truffle and Parmesan. Several other tapas-sized food circulated including Lilliputian tubs of something simply referred to as “fish soup”, square micro-bowls of cucumber peppercorn soup, a zucchini carpaccio with pine nuts, and the bizarre citrus tilapia (yes, I said tilapia). 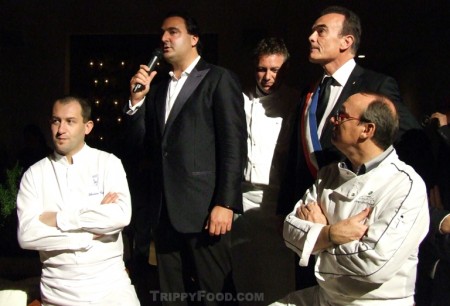 The music for the evening was provided by Fig & Olive’s resident DJ (Julien Nolan) who in keeping with the French theme also hails from southern France. Midway through the event, five young women stood on black platforms in the main area to show off fashion by Frédéric Fekkai salon of New York, although to many of the patrons they probably seemed like other partiers trying to get a better view of their surroundings. At one point, the music was cut and a group led by founder Laurent Halasz ascended the platform. Halasz introduced the evening’s special guests, including Mougins, France’s Mayor Richard Galy (easily identified by his tri-color sash); Executive Chef, Pascal Lorange; Chef Sebastien Chambru of Moulin de Mougins; and, Serges Gouloumes of Mas Candill (also from France). Despite a shushing of the crowd, the volume of conversation only diminished during the brief speeches. 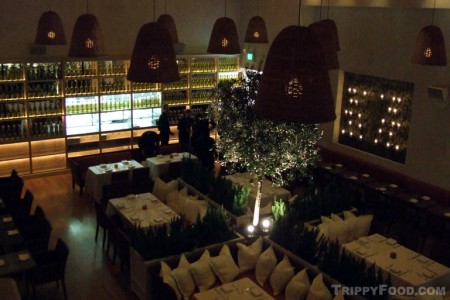 The main dining area at Fig and Olive

The party kicked back in gear and the waitstaff circulated platters of a “dessert crostini” featuring Amarena cherries, mascarpone and pistachio on shortbread as well as what looked like little plastic cups of Jell-O pudding (I’m betting it wasn’t). Promptly at 9 PM, the free booze trickled to a halt and the staff began bringing the tables and chairs back in. The bars remained open for paying patrons, and one of the bartenders who reluctantly accepted the title of “mixologist” created several unique beverages, one of which started with 10 Cane Rum with the addition of a clove-infused syrup and drops of 18 year fig balsamic vinegar applied in drops with a straw. This drink along with another featuring a sweet citrus base and topped with cream tasted like liquid candy. 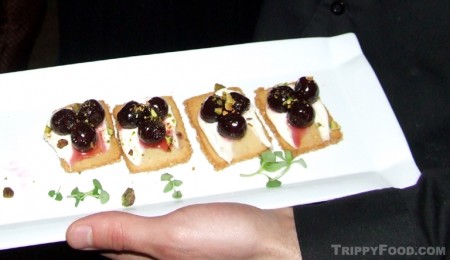 A desert crostini with cherries and mascarpone

It was obvious that Fig & Olive pulled out the stops for their opening, but Angelenos who haven’t frequented their New York locations will still have to experience the cuisine for themselves. My only recommendation is that they get a fig tree so that they won’t eventually have to shorten their name to “Olive”. Oh, well, there are always the ficuses outside…

See images from the third night of the opening party for Fig & Olive in West Hollywood, California