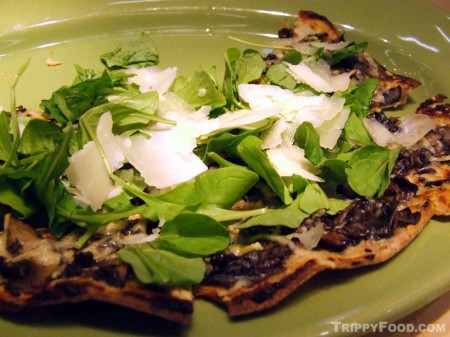 General Thomas R. R. Cobb… Julius Cesar… William Waldorf Astor, 1st Viscount Astor – powerful men, leaders who made history and share their name with a salad. Although the Cobb, Cesar and Waldorf salads were not named after these historical figures, there’s no doubt in my mind that if they were alive today they would rally to see that May was established as National Salad Month. Lucky for them that the Association for Dressings and Sauces (I’m not making this up) has done just that, and if you’re driving around Los Angeles looking to exercise your patriotic duty, you need look no further than Greenleaf Gourmet Chopshop. Although the moniker may give the impression that chefs onsite build hybrids and energy efficient cars from stolen parts, it is in fact the premier destination to get your greens on.  Owner and chef Jonathan Rollo opened the original Beverly Hills location in 2008 after a stint as assistant General Manager at the Hollywood Bowl, a position where he cut his teeth in a faced-paced and demanding environment – experience that would serve him well for the maddening lunchtime rush at the Century City restaurant. Rollo’s partner-in-crime Corporate Chef Kristi Ritchey (also a former Patina Group alumnus) has been an integral part of the operation from the beginning, and although both Rollo and Ritchey are chefs, they work collaboratively (the veritable Lennon and McCartney of the salad world). 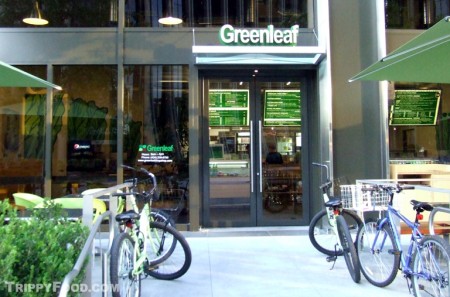 The Century City location is only open until 4 P.M., catering to the local business lunch crowd which usually forms a line stretching out the door. Evening in their neck of the woods becomes a corporate ghost town, so breakfast and lunch service is more than enough to keep them busy. The system works relatively simply – you can build your own salad with laminated menus and grease pencils while waiting behind the velvet ropes, presenting your selection at the counter, or simply order a standard menu item (which you are free to customize). Unlike the salad bar at the Golden Corral, you may find Chef Ritchey playing Simon Cowell at the counter (“Are you SURE you want to mix blue cheese, peanut butter and chipotle on that?”); understand that she only wants you to enjoy your Frankensteinian creation. Greenleaf is neither vegetarian nor vegan, but what they do strive for is being healthy with little touches like glazing cashews, walnuts and pecans with agave while roasting rather than sugar, honey or corn syrup and using whole wheat tortillas sourced from La Reina. 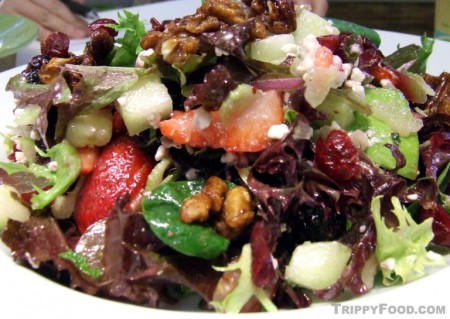 Fresh and fruity without the rooty tooty

At a recent menu tasting I attended at the Century City location, both Rollo and Chef Ritchey were on hand to show off some of their standard menu items and wine pairings (is it a white or a red with arugula?). They opened with Wild Mushroom Pizza, a misnomer to be sure seeing as how the pizza dough was substituted with a whole wheat tortilla, creating more of a flatbread. There weren’t an overwhelming amount of ingredients, but the flavor exploded without having to hide inside a doughy envelope. The smoky, earthy taste of the mushrooms complemented the sharp bite of the unmelted Pecorino shavings and the fresh crispness of the baby arugula; you could essentially breathe in the flavor. 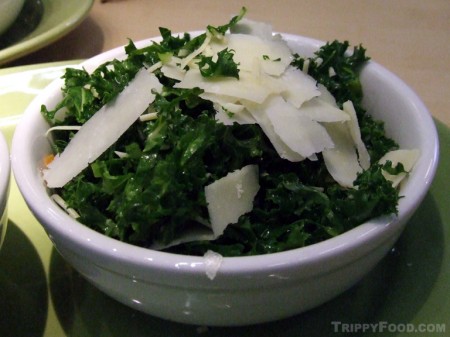 A simple and fresh kale salad

Round two featured the unfortunately-named “The Antioxidant Orchard” – a come-on to health-conscious individuals, but possibly off-putting to the unfortunate souls who might miss this outstanding sweet salad that literally tastes like eating a Farmer’s Market. As with the mushroom pizza, the dish was paired with an appropriate wine to bring out the character and colors of the food (in this case a light, dry Au Bon Climat Pinot Blanc). Zorra the Great is a Mediterranean-inspired salad that features feta cheese, Kalamata olives, artichoke pita chips and a mild hummus in a bed of romaine and arugula. The dish is named after Rollo’s dog, which made short work of the salad in an unguarded moment around the time of its inception. 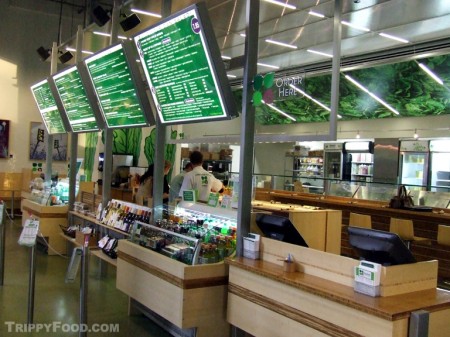 The assembly line in quieter moments

Other dishes previewed included a lemongrass chicken salad that pays homage to Southeast Asia with toasted coconut, mango, pineapple, Thai chili and basil and tossed with a unique lemongrass/lychee vinaigrette dressing and the “Mexplosion”, a slightly spicy green salad served on a whole wheat tortilla laden with corn and black bean salsa, roasted sunflower seeds, avocado and jalapeño jack cheese. Chef Ritchey also brought out a quartet of side dishes – a warm lentil salad was the ultimate lentil dish for those who don’t like lentils, tender and rich with the flavor of garlic and shallots; my personal favorite was a ridiculously simple Tuscan kale salad garnished with pecorino shavings and dressed with lemon juice and olive oil that tasted so fresh I wanted to slap its green face. A colorful rotini pasta salad was peppered with colorful bits of grilled vegetables and accented with sun-dried tomatoes and pesto vinaigrette, but it took second fiddle to an autumnal golden beet and yam cube salad that borrowed a sweet, mellow-spiced flavor from cinnamon and agave-roasted walnuts and cool, crisp texture from cubed cucumber. 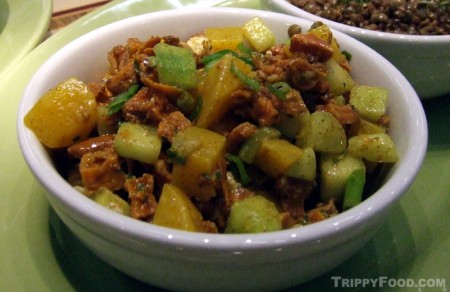 Golden beet and yam salad with the taste of autumn

I felt like a leaf-stuffed scarecrow at the end of the onslaught of vegetation, but Chef Ritchey convinced me to try the “Carrots are Good For You” carrot cake and freshly-baked chocolate chip cookies from grandma’s recipe; thankfully, the portions were Smurf-sized, but every tiny bite delicious. It was difficult to maintain my composure while she described a specialty she would make in her former life (risotto fries) that sounded so outrageously decadent I forced her to share the recipe at asparagus point. Ritchey previously enjoyed her own cooking, which in addition to the aforementioned fried risotto included duck confit cannelloni, but altering her lifestyle to eat the healthy offerings she designed for Greenleaf and regularly attending boot camp training and running marathons, she has shed 110 pounds and is loving life. 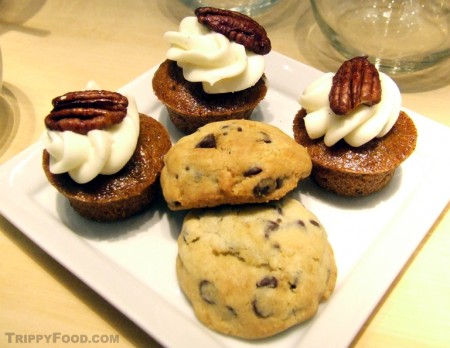 The cutest carrot cakes and chocolate chip cookies ever

As a self-confessed omnivore, I would undoubtedly experience meat withdrawal if I ever decided to follow the tofu brick road, but Greenleaf offers fresh, healthy and delicious vegetable-based dishes that are complemented with meat and other proteins, a sure way to be healthy and happy at the same time.  There’s a distinct possibility that you may want to make every month national Salad Month.

NOTE: This cost for this meal was provided by the restaurant. The content provided in this article was not influenced whatsoever by the organizer of the event..