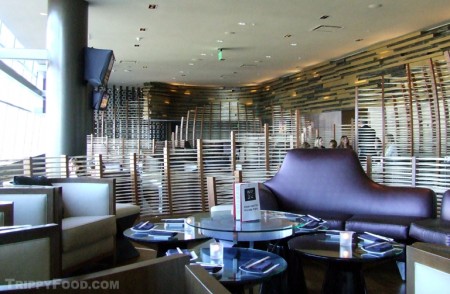 The skeletal and futuristic lounge at WP24

When the organizers of a recent media dinner at Wolfgang Puck’s WP24 in Los Angeles hinted that the patriarch might be making an appearance, no one batted an eye – after all, you’d expect the pope to drop by the Vatican from time to time, or maybe catch a glimpse of Barack Obama roaming the halls of the White House during your tour. What was surprising was that the promise of the celeb sighting wasn’t a distraction to improve the impression of the food inspired by the aforementioned Mr. Puck’s recent visit to the Far East. The tasting menu offered were light bites available on WP24’s lounge menu; the dinner menu featured more substantial cuisine, but we were camped out in the lounge, which offered a spectacular view of the poor, misfortunate souls navigating Highway 110 at rush hour. The spacious room featured curved wooden alcoves that looked like the skeletons of teak spaceships; one wall at the end of the lounge was comprised of empty wine bottles that glowed in the fading sunlight and framed a private room while vacuum tubes encased in glass greeted patrons at the entrance. 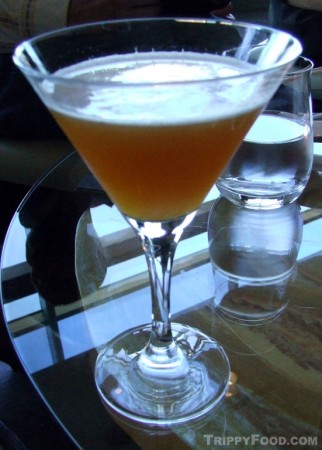 The evening began with liberal libations – trays of calamansi “lemonade” featuring Skyy Vodka and slightly sweetened with honey mingled with passion fruit martinis – although the spiked lemonade was neither too tart nor sweet, I preferred the Passion Cosmo, which almost tasted a bit like tamarind. A had a sip of The Minty’s Hemmingway, a grapefruit and rum cocktail, but have to admit that I lost track of the taste when I spilled half that drink on Neil of Food Marathon.

The food was like a melding of tapas, sushi and dim sum menus; Chef de Cuisine Sara Johannes personally brought out the trays of what could only be called bar bites from a point of reference. The first round was a beautifully prepared tray of sushi rolls which included a not-so-spicy spicy tuna roll, hamachi nigiri with creamy avocado and cucumber for a cool crispness, and my personal favorite – a dragon roll featuring tempura shrimp, asparagus, cucumber and a melty barbecued eel that exploded with flavor and texture.  Tasty single-bite dumplings combined a variety of ingredients and complements, and a small cheong fun roll featured a tender, slightly gelatinous rice noodle wrap that melted away in my mouth. I found the diminutive pork belly bao buns amusing – the puffy bun was folded at an angle with a cucumber slice wedged between which gave it the appearance of something between Pac-Man sticking out his tongue and the Rolling Stones’ logo. 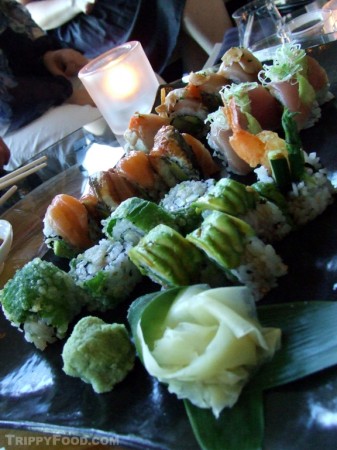 A variety of hand-rolled sushi

As the sunlight faded and the tables became lit by candlelight, I mistook the lettuce holding Jidori chicken with a ginger/chili dressing for a scallop shell but once I observed fellow food writers attacking them without breaking their teeth, I followed suit.  I enjoyed the tempura green beans, which had only the lightest batter – they maintained their crunch, but were a bit on the salty side from the introduction of curry salt.  The prawn toast was a bizarre little treat – they were assembled on the plate like tiny fried shark fins, accented with black and white sesame seed racing stripes, but the taste of the prawn sealed within their depths was astounding – I could have sworn it was lobster. Tiny fried quail drumsticks were unusually but pleasantly crispy, coated with what tasted like a cross between barbecue sauce and orange chicken glaze, and the tender tempura scallops were buttery and perfectly cooked.

Around the time desert was brought out, the man himself arrived; it’s always pleasant to meet the chefs and owners and these media event, but I fully expected celebrity chef Puck to arrive, lean over the rail above where we were seated, give a royal hand gesture or two and be off like a cotillion gown. Instead, Chef Puck sat at our long array of strung-together tables and began picking at the tray of Pastry Chef Sally Camacho’s decadent chocolate Marjolasian bites stating that they were his favorites. The man was warm, open and conversational, insisting that we join him in pictures when we turned our food paparazzi cameras on him, and to everyone’s surprise, asked the group if we had seen the kitchen. I wondered if I had absorbed too much alcohol from the Hemmingway that drenched my sleeve and pant leg, because Wolfgang Puck was leading a procession of food writers into his domain, grabbing trays from the kitchen staff and handing out tidbits. 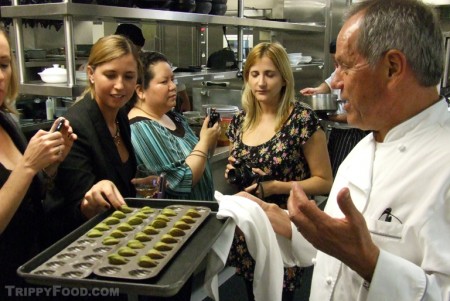 A hot tray of green tea Madeleines was passed around, and the spongy, Lilliputian cakes tasted like warm bites of home. At one point Chef Puck grabbed and started passing out tiny cups of a citrusy calamansi version of a key lime pie faster than Chef Camacho could get them off the assembly line. The kitchen itself was a culinary wonderland with exotic dished strewn about and various poultry hanging from hooks. It seemed that by virtue of my proximity to Chef Puck, every time I asked, “What is that?”, I found myself with a broken off piece of whatever “that” was being handed to me. When we first arrived in the kitchen, we caught a glimpse of a beautifully dark whole roasted duck, and on the way out found a similar waterfowl gutted like an avian autopsy. Chef Puck explained that they bring the duck out whole, and then carve it for the customer tableside. Seeing the chef picking at the bird’s carcass and smiling was a clear indication that the dish was something special. 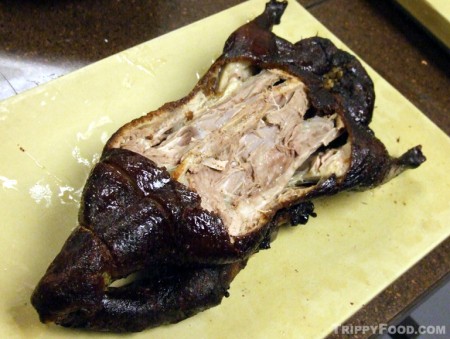 What is left of a dark, flavorful Peking duck

On the way out of the kitchen the holy trinity of chefs Johannes, Puck and Camacho posed for photographs, and while we weren’t being ushered out, to stay any later would have been anticlimactic. Although the appearance of Chef Puck made the evening a unique experience, the food we sampled directly from the menu rose above whispers of being over-hyped – this was well executed, flavorful and artistically prepared cuisine. To any doubters out there, I can only offer this advice: go Puck yourself.

NOTE: This cost for this meal was provided by the restaurant. The content provided in this article was not influenced whatsoever by the organizer of the event, although that Wolfgang Puck is one nice guy.