It’s The Big One, Elizabeth! 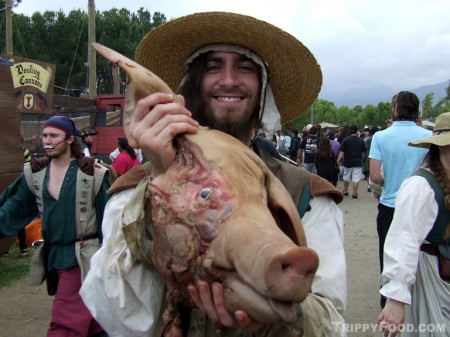 A village monger demonstrates how it does not come fresher

The mere mention of the phrase “Renaissance festival” conjures up off-season Trekkies mustering up their best Shakespearean bravado and adorned in chainmail while brandishing a turkey leg; they have that too. Methinks, however, that thou doth do thineself a grave injustice by dismissing this cultural event off as a foray into geekdom. The Renaissance Pleasure Faire is a festival of Elizabethan proportions (the first one, not the current regent) and the event that begat all others across the country. Originally started nearly 50 years ago in a schoolteacher’s backyard, this annual extravaganza features costume and revelry, food for the most part with a traditional slant, games such as jousting and throwing tomatoes at the village fool and crafts relevant to the European Renaissance including period clothing. Don’t worry if your jerkin, doublet and codpiece are at the cleaners – if you’re not keen on shelling out your last doubloons on the elaborate Elizabethan couture available for sale you can visit the tailors’ tent and rent yourself some Renaissance street cred. 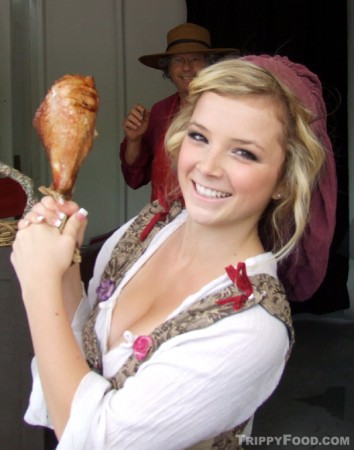 A young server up at bat at the turkey leg stand

Friend and fellow bard Sir Edward Lin joined me on an invitational tour to sample the cuisine at the area that gives new meaning to the term “food court”, downing a pint or two of hard cider and mead along the way. Our main goal was to partake of the turkey legs that the Renaissance Pleasure Faire made a stable of, not only at Renaissance festivals but at state and county fairs as well, and to avoid the cinnamon-sugar lance we know as the churro. Along the way we met some wonderful characters, indulged in uncharacteristically delicious and unusual cuisine and got lost in the spirit of Elizabethan England.  I could entertain you with mere written word as our host Will Shakespeare would have back in the 1600s, but I’ll let the audio and video take you back to those bawdy, boisterous times when the only thing you had to worry about was a ridiculously short lifespan. Please enjoy our joint Trippy Food / Deep End Dining podcast and make the effort to open your mind and indulge in the revelry of the Renaissance Pleasure Faire.

There’s still time to take in the weekend festival in May, but remember, if you wait too long the Renaissance Pleasure Faire will be history.

NOTE: This cost for the event and the food was provided by organizers of the Renaissance Pleasure  Faire. The content provided in this article was not influenced whatsoever by the organizer of the event.