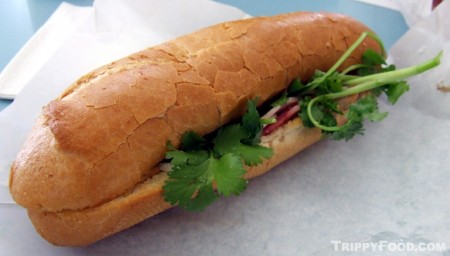 To the untrained eye, banh mi might resemble a “five dollar foot-long”, but under the hood you’re likely to find the ingredients a tad less Western. The term bánh mì actually describes the baguette used to create this Vietnamese staple, a diminutive loaf of French bread made from wheat and rice flour. Bánh mì can have a variety of fillings, but traditionally features slices of ham and/or head cheese and stuffed silly with fresh crunchy vegetables including cilantro, hot peppers, cucumber and picked, shredded daikon radish and carrots. In Southern California there are a few hot spots where you don’t have to travel far to sample traditional and localized preparations of the workingman’s salad sandwich, including San Gabriel Valley and Little Saigon in Westminster. 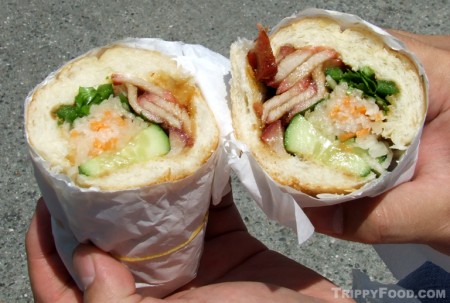 I was invited to join The Minty on a bánh mì through L.A.’s Chinatown, and after the fun I had getting my Salvadoran on at her pupusa crawl, I eagerly signed up. She had planned 5 stops, which included a not-so-gourmet food truck and an upscale bistro serving up Anglicized versions of the sandwich at the end of the yellow brick road in Little Tokyo. There were four foodies in tow (myself included) and we quickly agreed that we would order one or two sandwiches at each stop and quarter them (a sensible survivor skill when dealing with multiple bread bombs). The first stop was Bưu Điện, a small storefront at the end of a parking lot alley with iron folding plates over the window. The menu featured about 10 variations, all listed on a banner on the wall, and we quickly agreed on the Bánh Mì Bưu Điện (their signature Bưu Điện Sandwich) and the Chả Lụa (a Vietnamese pork sausage). The Bưu Điện Sandwich was their version of the traditional sandwich featuring a pork pâté and sliced ham and chock full of the aforementioned vegetables. The bread was firm but not stale and it neatly postponed bites bursting with flavor and texture; the sausage was an odd shade of red and was crumbly and dry. While a refrigerator held soft drinks I was intrigued with the two fountain bubblers at the counter that held a brownish-black fluid and something that looked like lawn clippings run through a blender. I opted for the dark, murky beverage which turned out to be a tasty blend of five different teas. 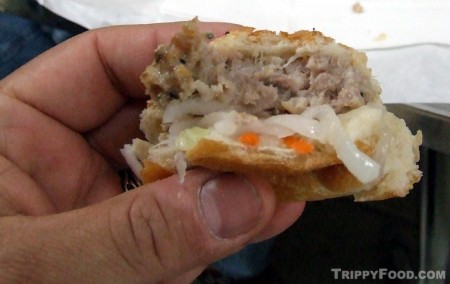 The remainder of my meatball banh mi at LA Sandwich

Our second stop was a confusing little place billed as “Liên Hoa Chinese Deli & Seafood Market”. Inside was a row of steam tables holding limbs and organs of undetermined fauna and a meat case holding executed whole roasted ducks hanging from hooks, illuminated by what looked like klieg lights. As I prepared to preserve Donald in digital celluloid the woman behind the counter shouted out, “No pictures”, obviously assuming I was going to copy their inimitable style and open my own Chinese deli in Laguna Beach. We ordered the Vietnamese Special and BBQ Pork sandwiches and waited while she “toasted” the bread. Since Liên Hoa serves up hot food but doesn’t have any place to sit, we opted to partake of our purchases on a bench out front, hoping that the belief that everything tastes better outdoors held true. Sadly, it did not. Both sandwiches were dry, doughy and salty and even though they featured different ingredients did not have much variance in taste. 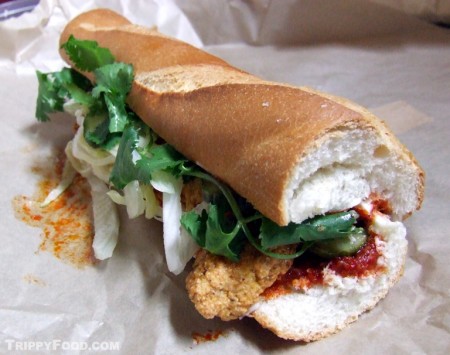 Discouraged but not beaten, we crossed back over the street and into a nondescript indoor mini-mall to LA Sandwich, a place that looked like a Subway counter you might find at in a truck stop on I-5. The climate inside was so diverse that I expected hail over the cash register; one particular spot felt like it was under a heat lamp and the store was filled with the smell of burnt toast. LA Sandwich offered 6 sandwiches and we decided on the #2 Pate Chả Lụa (Vietnamese sausage pâté) and #6 Xiu Mai (steamed meatball). We sat at a burnished aluminum table in the hallway where we divided up the goods – the bánh mì gods must have been smiling upon us since the smell of charred bread was not emanating from our meal; the bread was toasted but soft and the buttery Vietnamese mayo was prominent in the sandwiches. I particularly liked the course-ground steamed meatballs which were complemented by the spicy, fresh cilantro, frisky jalapenos and cool, crisp cucumber. 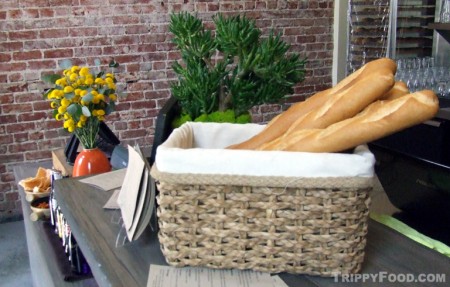 French bread, tools of the trade at The Spice Table

We looked for the Nam Thai Vietnamese Truck at its stated location, but being a vehicle we were outsmarted by its mobility. With only one stop on the crawl left, we traveled the mile or so to Little Tokyo to the upscale Spice Table. The interior of the antique brick building was well lit but looked like it would be more at home in Tuscany than Los Angeles. I wasn’t sure we were in the right place since every printed word in the place was in plain English. The Spice Table’s menu features five bánh mì sandwiches (simply referred to as “Sandwiches”). I wanted to stay with tradition, ordering the “Cold Cut” sandwich (featuring ham, pâté and head cheese); we also ordered their take on the meatball bánh mì and the bizarre fried catfish. The cold cut sandwich had the potential to be fresh and flavorful but sadly it was doused in a red Sriracha-like sauce that overpowered the dish. The meatballs were zesty and delicious and garnished with peanuts and fresh herbs, but I found the over-use of the red hot sauce annoying on this sandwich. It seems as though they douse all the sandwiches with the fiery brew, but it actually worked well with the fried catfish. The catfish nuggets were coated in a cornmeal batter that formed a crust, sealing in the juices and resulting in moist, tender bites. I laughed a little thinking that the assembly of the catfish on the baguette along with the hot sauce made the sandwich seem more like a po-boy than a bánh mì.

I always have fun on The Minty’s crawls and enjoyed the variety of choice in what is otherwise a simple sandwich, but short of booking a flight to Ho Chi Minh City I am now intrigued enough with bánh mì to head out to San Gabriel and Westminster in search of the real deal. Big A, I still crave your steak and cheese, but I now have a new sandwich to love.

Read The Minty’s take on the banh mi crawl in L.A.’s Chinatown