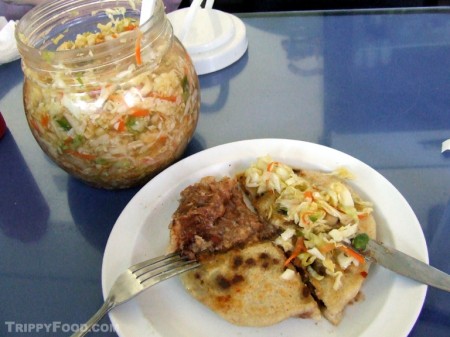 Pupusas have been part of the Los Angeles food culture since the 1980s influx of Salvadorans during civil war in their homeland. Salvadoran and Central American restaurants grill up pupusas by the thousands on a daily basis from windowless shacks to tablecothed bistros, with each carrying the basic three or four varieties and then throwing in one or two unique variations on the theme. To enjoy this simple yet filling food of the people of El Salvador for thousands of years, you need not look farther than your friendly neighborhood pupuseria (which admittedly sounds like something requiring Kaopectate). Pupusas are made from masa de maiz, slightly different than the corn masa used to make tamales; in some cases nixtamal is used, which starts with masa made from hominy (corn soaked in an alkaline solution), while other pupusas use masa harina (flour) or rice flour (in the case of pupusa de arroz). Most are filled with Salvadoran cheese (quesillo) and some other substance such as beans, meat or vegetables. Fillings can be deceptive – a pupusa de chicharrón does not contain the crispy fried pork skin we’re accustomed to, but ground pork filling instead. The pupusa revuelta contains chicharrón, beans and cheese and pupusa de loroco is stuffed with cheese and the flower buds from the Central American loroco vine, a vegetarian delight that tastes like a cross between baby asparagus and tender broccoli stems. 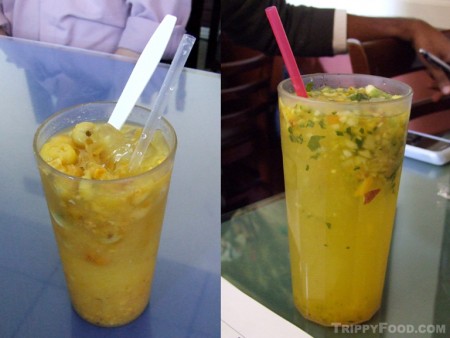 The Minty (as she is known in blogging circles) recently organized a pupusa crawl along a one mile stretch of L.A.’s Beverly Boulevard. The idea was to hop from one pupuseria to the next, an easy and inexpensive adventure considering that pupusas range from one to three dollars apiece. The first stop was Atlacatl, a popular restaurant that looked like a movie Mexican restaurant, complete with what looked like velvet paintings of iguanas and armadillos (which I secretly prayed were menu items). Some of the crawlers ordered ensalada (which I pictured to be something like a basic garden salad but turned out to be a Salvadoran drink). This sweet and fruity concoction featured finely chopped fruit, including apples, mamey, and what looked (but didn’t taste) like cilantro. The juice figured to be an apple/pineapple mix, and the cool, sweet beverage would have been perfect with a shot of rum in it. Even though our host said that the pupusas were small, I knew I’d have to pace myself to hit the five designated pupuserias. I sensed danger when the pups began arriving, with each being about 8 inches across. I ordered the loroco, which tasted more like it had a filling of broccoli cheese soup rather than the taste of asparagus as advertised, and after enjoying the pupusa it was off to our next stop. 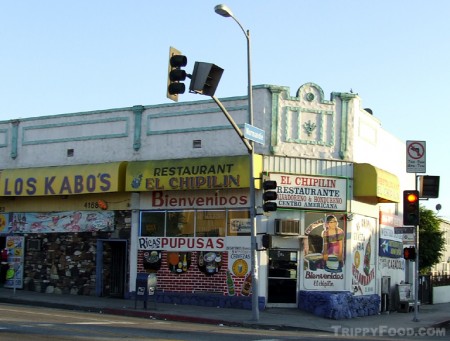 El Chipilin is a simpler place with mismatched silverware and dishes, but in my opinion featured the most flavorful pupusas we sampled. I ordered the mild pupusa ruvuelta which wasn’t the all-out assault I thought it would be, and I liked the texture of the dish. One of the other guests allowed me to sample of pupusa de chicharrón which had a smoky aroma and firmer texture that was superb. Those who ordered ensalada to go with their pupusa got an unusual surprise – the inclusion of nance, a small yellow fleshy fruit with a pit almost as big as the fruit. Apparently there was a sale on nance since each glass held what seemed to be hundreds, looking like a myriad of little eyeballs peering through the glass. The benefit of our next stop (La Nueva Flor Blanca) was sitting next to the glass half-walled kitchen which gave us an opportunity to watch them make the pupusas from scratch. I ordered the pupusa de chicharrón (which I wisely negotiated going halfsies with one of the other diners), but was slightly disappointed after the meaty disk of joy at El Chipilin. We had planned a stop at El Carbanero (whose sign advertised 99 cent pupusas) but in my limited knowledge of Spanish I determined that you can only get the discount pupusas on Mondays and Thursdays. 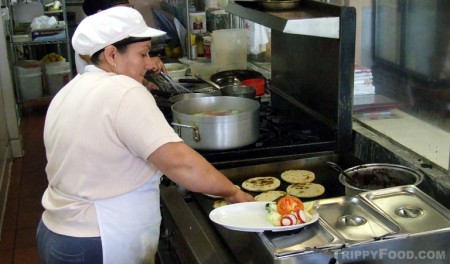 With our Salvadoran ballasts sloshing around, we skipped El Carbanero and headed for the last stop – the fancy Jaragua. The first thing that catches the eye at Jaragua is their pre-Colombian jungle-themed bar at the end of the room; in fact the drink menu was almost as big as the food menu. In addition to the old standards, I noticed a squash and cheese (ayote con queso) pupusa that I just had to have (and halve). As upscale as the surroundings were, the pupusas were still in the $2.50 range, and the delicata squash and cheese pupusa I ordered did not disappoint. From the first stop I noticed that the condiments were almost identical; a watery hot sauce and jars of curtido (a light mix of shredded cabbage, carrots and jalapenos in vinegar). I had had curtido before at the San Fernando Festival, using it to top a cheese and potato pupusa – to me it is the perfect substitute for otherwise bland cole slaw. I could eat a bowl of curtido all by itself, but it was remarkable that we had gone to four different pupuserias with not the slightest different in the taste of each restaurant’s slaw. 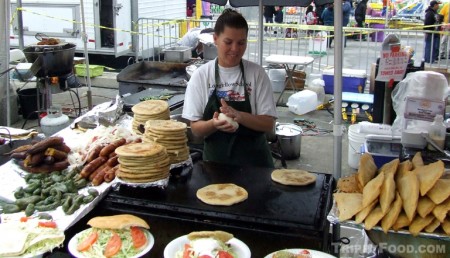 A woman at the San Fernando Festival makes pupusas by hand

It’s amazing how quickly you can fill up on pupusas, but they’re rich and flavorful, the perfect easy-to-eat street food. With a variety of fillings it’s easy to buy one of each and share with your friends, but moderation is in order – you don’t want to end up going home in a pupusa crawl.

GALLERY: See images from The Minty’s pupusa crawl and pupusas at the San Fernando Festival

Read The Minty’s recap of the Pretty Please, Pupusa Crawl Along Beverly Boulevard

14 Responses to Don’t Pooh-Pooh the Pupusa