The Glendon in Westwood Village on a busy night

When I arrived at The Glendon’s new menu item media tasting, I noticed the fare for the evening was billed as tapas. Although tapas has a centuries-old history starting in Spain in the 13th century, it has come to encompass a plethora of plates of bite-size food that’s designed to share, with The Glendon’s presentation being more of a tribute than a traditional take. The menu is still a work in progress and is scheduled to be unveiled around Valentine’s Day, so some of the items may not show their tiny little faces, but the offerings that night reflected influences from around the globe. The wine list was designed with a sense of humor with suggestions for wines to order on a first, second and third date. Since it was my first visit to the Glendon (which in previous lives had been a sushi bar and a swanky hang-out for the likes of Ol’ Blue Eyes), I opted for a nice red off the “First Date” menu – that and I liked the sound of “Radio Boca Tempranillo”. I have difficulty telling a zinfandel from a Thunderbird; I may not be a connoisseur, but there was something I really liked about this wine – it was a creamy, slightly spicy wine that I discovered came from Valencia, Spain. I was imagining in my head someone chopping fruit and dumping it in a pitcher of the tempranillo to make sangria and thought it would be a shame to add anything to this glass. I had to laugh when I looked to the right of the First, Second and Third Date wine menus to the Cocktails column and found a drink featuring Bacardi, lemon, mint, and something called “twisted cabernet” with the unfortunate title of “Twisted Bitch” – I assumed this was “10th Anniversary”. 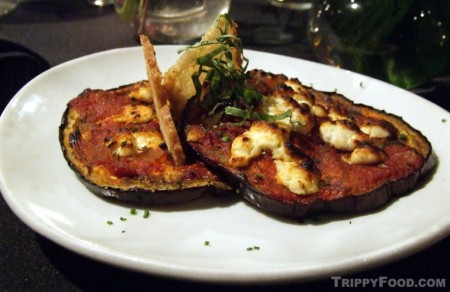 Once the dishes started arriving I started to like this idea of small bites and wondered if they employed elves as sous chefs. The benefit is that you get to talk through the meal without your food getting cold, but if the conversation starts heading south you always have something to pop in your mouth. One of the things I had some difficulty with was the names of the dishes; while some were more than self-explanatory, others offered only a hint of what to expect. The first plate out was a black bean hummus that had the familiar garlic and olive oil essence you’d expect, yet not a hint of chick pea to be found. This Mexican spin on a Middle Eastern dish had a sprinkle of a spicy red sauce, which I discovered to be rich with Sriracha, an ingredient that permeated most of the sauces and dips presented that night. I jokingly asked Chef Nick Jacobs if he bought a pallet of the stuff off an unmarked truck, but I get the impression he really likes working with it. Once I got used to the black bean substitute it became a great starter to go with the tempranillo. An unusual little glop of caprese tartare featuring buffalo mozzarella and ricotta was brought out that had an egg-like taste to it, even though there was none employed. One of my favorites were the roasted eggplant slices with goat cheese – there was a slight taste of cumin in the tomato, which caressed the top like a pasta sauce – the slight crispiness of the eggplant and the cheese and tomato gave the dish a taste like a tiny doughless pizza. 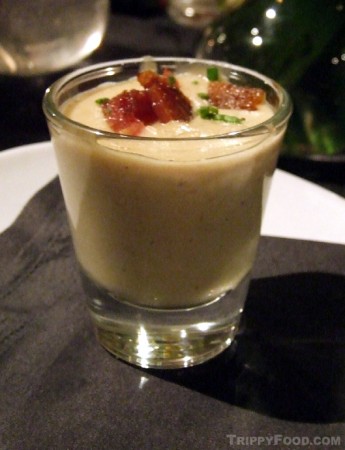 The first dish with a naming issue was the potato and bacon soup shooter. This sturdy offering was like drinking a loaded baked potato, but the consistency was in the realm between soup and mashed potatoes. I always think of a shooter something you down to get the taste past your tongue as quickly as possible, reserved for rotgut like Jose Cuervo, but with the rich smoky taste of the bacon and the thick consistency, this was something I wanted to savor. The other difficulty associated with this dish was the presentation – because of the consistency, it did not want to slip free of the confines of the shot glass willingly but necessity being the mother of invention, I deftly plucked the straw from my water glass and put it to work, getting every last dollop. The next dish that arrived can only be described as calamari as close to perfect as I’ve ever had – tender as hell, light and golden, not greasy or dry. If there was any negative it was that it was slightly salty, but the quality was outstanding enough to encourage me to ask Chef Jacobs his secret. He unlocked the briefcase handcuffed to his wrist and told me that the squid pieces are first sautéed in garlic and butter and then refrigerated; they are then flash fried prior to serving. The accoutrement de jour for these golden wonders was a red pepper aioli, but the mollusks were so good I didn’t dip. 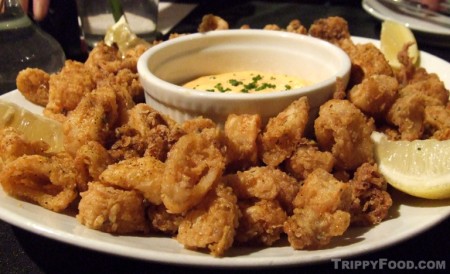 A personal serving of baked brie on toast was drizzled with honey and topped with a syruped fig for a sweet and smoky treat that combined a variety of textures without merging them – I was pleased to see that the rind was left on the cheese. I could smell the barbecue sauce in the whiskey BBQ pork and beef meatballs as they were brought to the table, and the savory sauce was kicked up a notch with caramelized onions and garlic. It seemed like the hits just kept coming until I had to think again when the inappropriately named “Korean pork belly tacos” came out. I would have rather been enticed with the name “pork belly tacos” instead of dissecting the dish and combing through the cured, marinated pork belly and shredded cabbage looking for kimchi. Naturally, this tidbit was crowned with a light application of Sriracha. The final morsels to come out of the kitchen were unfortunately the least impressive: fried asparagus. It was a nice try, but the difficulty with asparagus is eliminating the stringy segments and in this case, getting the batter to stick. The dish was tasty but it was like eating your way through a box of Cracker Jacks with the prize being a woody piece of vegetable. Fortunately the dish was augmented with a garlic aioli (oh, yeah, and an artistic swirl of Sriracha). 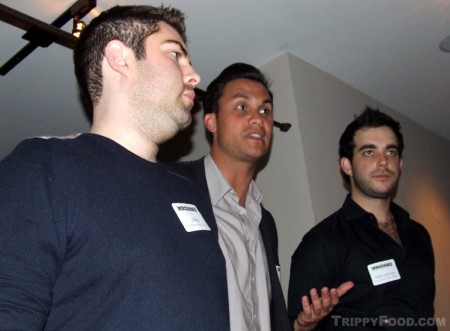 Finishing with chocolate and caramel cheesecake bites and a cup of coffee I realized that the presentation was perfect for an evening of sharing – food and well as conversation. The concept of the first, second and third date wine list was ideal for this type of dining, and even though I was breaking bread with other media folks instead of a date it made for an enjoyable evening nonetheless; I just hope my fellow diners found me to be more like the zinfandel and less like the Thunderbird.