Portland is a quirky place that prides itself on being slightly off-center (and often a little off-kilter). Nowhere is this more obvious than downtown, where signs throughout the area urge Portlanders to “Keep Portland Weird”, with the largest sign conveniently painted on a brick wall across from Voodoo Donuts. In addition to the off-beat, Portland also holds dear sites of cultural and historical significance so Huber’s Cafe (the oldest restaurant in Portland) became a “must-see” item on my Portland itinerary. Huber’s is located across the street from a large food cart pod on the corner of SW 3rd Avenue and Stark Street in the Oregon Pioneer Building. This wasn’t Huber’s first location; the restaurant started when Frank Huber purchased the Bureau Saloon on 1st and Alder in 1879 (which technically makes it even older). They relocated several times (losing their first location to a massive flood on the Willamette River) until settling into their current location shortly after the building was completed in 1910. Huber took a Chinese stowaway named Jim Louie under his wing in 1891 which allowed Louie to cook while Huber tended bar. It was after Louie came on board that Huber’s became known for serving turkey, primarily in the form of sandwiches which were offered to free to patrons who purchased drinks. Louie ran the business upon Frank Huber’s death in 1912 and was able to keep the business running through Prohibition by billing it as a cafe specializing in turkey dinners (although secretly they were also a speakeasy). The cafe operated under joint family partnership until Huber’s son sold the family interest in the cafe to Louie’s son in the early 1950s. 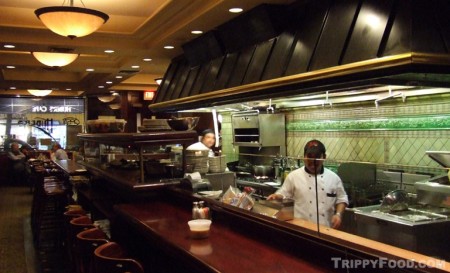 Where the magic happens at Hubers

From a historic standpoint, the story so far would be reason enough to visit Huber’s but I would be remiss if I didn’t share the trippy aspect of this revered slice of Portland history. The 3rd Avenue front has awnings shading the windows that face the food cart pod across the street, and looking in affords a view of a wood-paneled restaurant that oozes tradition, however the entrance through the building takes you to the rear of the building and the original cafe from 1910 (the front room was added years later after Huber’s acquired the space). Stepping inside is like entering a portal to days gone by – the original tile floors and wood paneled booths are still intact and most of the antique fixtures are still in use; old globe lights and stained-glass panels provide the light in the cafe. The only thing that detracted from the experience on my visit were the flat panel televisions, but I was informed that they are not normally there – the televisions were brought in for that night only in order to broadcast what I am told was a very historic BCS National Championship game between the Oregon Ducks and Auburn Tigers. I was willing to overlook the modern intrusion in the name of history, but unfortunately the Ducks lost the game. 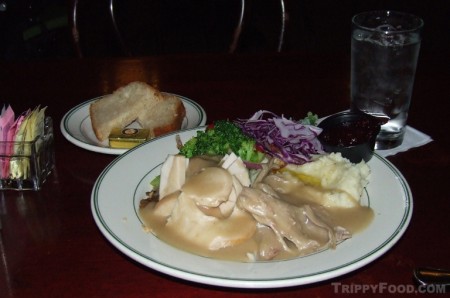 The menu is a nod to Jim Louie’s original turkey sandwiches – you can get turkey in a dizzying variety of preparations, from piccata to marsala with even a roasted turkey leg thrown in for good measure. I was having a severe moment of indecision and asked the waiter what the most traditional item was on the menu; he directed me to the roasted young tom turkey. As I read the details of the dish, I realized that what they were hawking was simply Thanksgiving dinner. The dish is served with a combination of dark and white meat, steamed vegetables, sage dressing, cranberry sauce and a choice of mashed potatoes or yams, and while I’m more of a Sith than a Jedi (I like my turkey on the dark side) I decided to go for it since I can’t remember the last time I was able to have Thanksgiving dinner in January. Before the meal arrived the waiter brought a plate with a couple of slices of their homemade beer bread. He told me that the bread is made with off-the-shelf Anheuser-Busch beer, but it takes on a character of its own when baked; bringing the bread up to your mouth introduces the beer aroma, tamed from the baking process. As suggested, it is the perfect tool for sopping up the delicious turkey gravy generously flowing over the turkey and potatoes. Although I am probably not going to be eating white meat turkey any time soon, theirs was delicious – hot, juicy and full of flavor. The trick, it seems, is that their turkey is cooked in a convection oven which keeps the meat moist, then carved and skinned in small batches and allowed to wade in the turkey broth. Huber’s roasts 5 to 6 turkeys daily for the meat for all the dishes; the young tom dinner is served year-round, every day Huber’s is open – naturally, Thanksgiving Day is their busiest. According the waiter, if you don’t have reservations by August, your only chance of getting their dinner is ordering it to go or queuing up in line in hopes of getting a seat at the bar. The vegetables were simple – lightly steamed broccoli, still bright green and with some crunch and nearly raw shredded cabbage. The dressing is made with homemade croutons and packed with turkey and sage flavor. 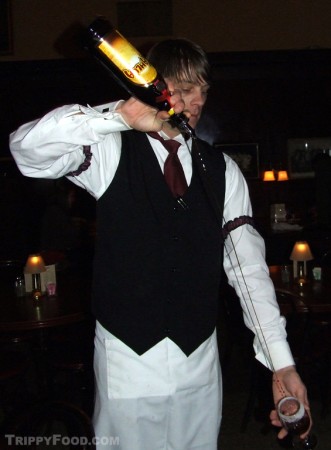 A bartender prepares a Spanish coffee

When the waiter returned to clear away my cleaned plate, and I told him I had one major problem with the dish – it made me crave a slice of pumpkin pie. As if in anticipation of my request, he said he’d bring one right out. Their pumpkin pie was sweet and spicy, topped with sugared vanilla whipped cream accents and dotted with fresh blueberries. While savoring the pie, I was treated to a show that Huber’s is renowned for – the bartender preparing Spanish coffee at tableside. Jim Louie’s grandson James had seen Spanish coffee prepared downriver at the Fernwood Inn (now Amadeus Manor) in Milwaukie (which I assume tastes as great as its name); he liked the idea and started preparing it at Huber’s where it has been a tradition since the 1970s. The preparation starts with a flaming glass of Bacardi 151 rum which is then acrobatically swirled about while the bartender pours a steady stream of Kahlúa from an arm completely outstretched in the opposite direction. Apparently the drink is so popular that they were the largest consumer of Kahlúa of any independent restaurant in 1990. After the Kahlúa stream is complete, coffee is added from a full hot carafe in the same manner, and the drink is topped with Triple Sec, whipped cream and nutmeg. I asked if they had ever done the drink with a shower of ignited cinnamon sparks, and he said that they had but found it made the drink taste burnt; I was thinking it sounded like a fast way of recreating a Rhode Island Great White concert in the wood-paneled room.

What started as a simple visit to a local historic landmark pushed the needle into the red on the Trippy Meter – I was at the oldest restaurant in Portland, owned by the same Chinese family and serving year-round Thanksgiving dinner while offering the dazzling pyrotechnical display that is the making of Spanish coffee – it doesn’t get any better than that. I don’t just recommend Huber’s; I think if your Portland visit doesn’t include the roast young tom turkey dinner, then you’ve missed the boat. Don’t worry though – perhaps you can hang out in one of the bars over the Shanghai Tunnels and find yourself on that boat anyway.