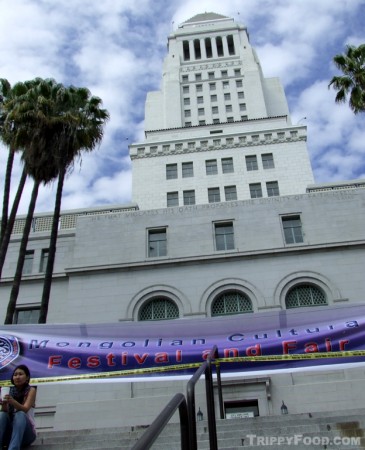 Discuss aspects of Mongolian culture with most Westerners (particularly Americans) and the conversation is likely to gravitate to two topics: Genghis Khan and Mongolian BBQ. Fortunately at the first of what hopefully becomes an annual Mongolian Cultural Festival and Fair held recently on the South Lawn of Los Angeles City Hall, Angelenos had the opportunity to get a glimpse into the reality of the proud heritage and diverse culture of the Mongolian people. Although Genghis Khan is known throughout the annals of history across the globe for creating an empire, modern-day Mongolians strive to show that what they represent transcends that legacy. 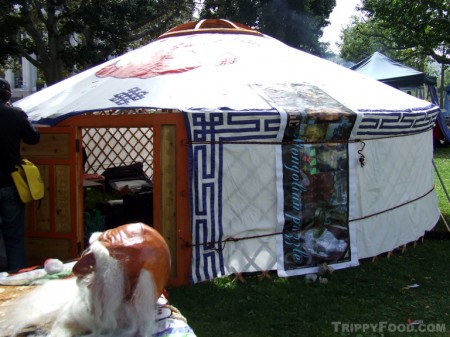 A typical but stripped down yurt

At the festival, scanning the grounds to try to find the big, domed grill typically found at the center of your friendly neighborhood Mongolian BBQ would only result in massive disappointment when you discover that the namesake cuisine is not even remotely Mongolian. Despite the clever advertising, Mongolian BBQ was a late 20th century Taiwanese invention. As our gracious host Sarnai Shuherjav explained, Mongolian cuisine employs what ingredients can be extracted from the mountainous terrain – primarily meat and dairy products. The few dishes with limited varieties of vegetables are influenced by the country’s nearest neighbors, China and Russia. Of the food offerings at the festival, the meat of choice was beef, but in Mongolia the food might feature lamb, goat, camel or even marmot (a variety of groundhog). Although I found the thought of devouring Punxsutawney Phil appealing (especially in boodog, a dish made from stuffing hot stones into the hollowed gut of a marmot) the fearless and vigilant government of the State of California would never allow this at a public event. 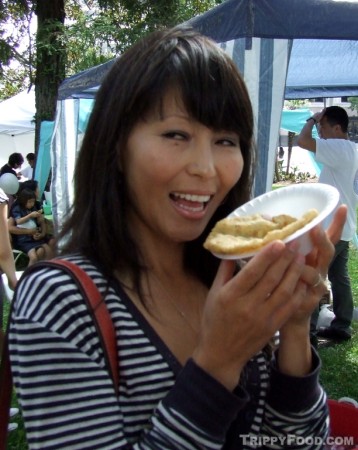 So what’s a food adventurer to do at a toned-down Mongolian cultural event? Simple – seek out the most exotic item at the festival, a task made easier when Sarnai brought us to the spot where a woman was ladling out Styrofoam cups of what looked like milk. The drink was airag, a Mongolian favorite made from fermented mare’s milk (yes, mare – a female horse). The beverage was slightly sour and had a mild alcoholic bite, but despite or because of the unusual flavor (similar to Persian doogh) I was compelled to continue drinking it. Chinese-influenced dumplings were being made at several booths including a steamed variety (buuz) that were filled with hot broth and mildly seasoned with green onions and a larger, fried dumpling (huushuur) that is rolled flat prior to its hot oil bath. These would traditionally be stuffed with mutton (lamb) or beef, but there was no shortage of beef at the festival. The dough used for the dumplings is made with a simple flour and water mixture, again a nod to the tradition of making do with the materials available. 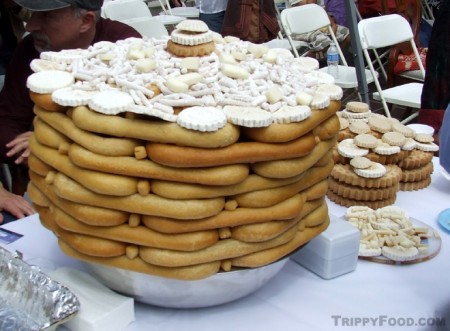 At one table were artistically assembled harvsai, a festive celebratory stack of what looked like soft Bavarian pretzels crowned with cookies and crackers. The large fried dough pieces (referred to as “Mongolian doughnuts” are typically stacked in odd-numbering rows with the width and height of the stack based on the age or importance of the person being honored.  The little bits strewn about the top may have looked like shortbread but were actually made of aaruul, dried milk curds. The aaruul was also featured on plates with tiny cubes of very mild cheese, and to the untrained eye it was difficult to tell them apart (hint: the aaruul had a sour taste to it). 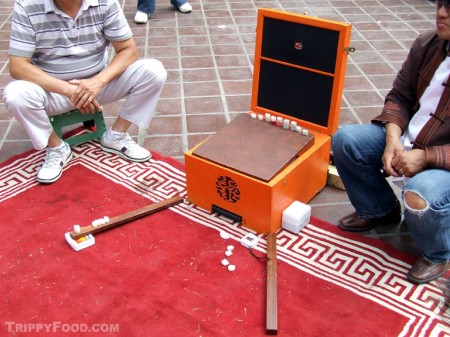 Livestock anklebone targets in the game of shagai

There is very little (if any) sweetness found in Mongolian cuisine, a fact attributed again to the shortage of sugary fruits and foods in the region. One booth had unfortunately sold out of the milk tea, which Sarnai proudly stated contains tea, milk and a dash of salt. During our gastronomic tour of the festival we were treated to traditional and contemporary music blasting from huge speakers framing a stage with a Mongolian flag backdrop. Zula Damdin (president of the Los Angeles Area Mongolian Association) gave us a brief but thorough walk through the country’s culture and the spirit and pride of the several thousand Mongolians residing in the greater Los Angeles area.  As she spoke with us in satiny Mongolian costume and regalia, a nearby competitive game of shagai, or ankle bone shooting, was taking place (a sport involving shooting makeshift wrist rockets at livestock anklebones stacked on a chessboard-sized platform).

I hope to see the event become an annual occurrence; I was truly humbled, walking away knowing much more about the rich culture of the Mongolian people than I ever could have imagined. I think the next time I visit a Mongolian BBQ I’ll ask if they have any marmot.

NOTE: This cost for the food at this event was provided by organizers of the Mongolian Cultural Festival and Fair. The content provided in this article was not influenced whatsoever by the organizer of the event.

One Response to Yes, We Khan