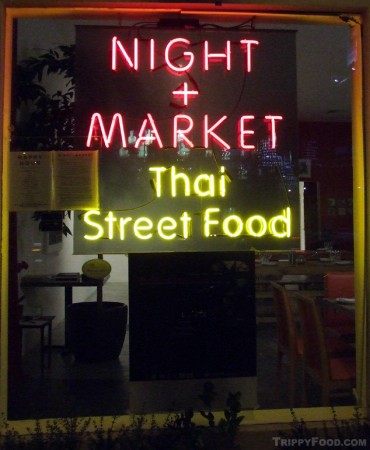 For over three decades, the Yenbamroong family has been a fixture on the Los Angeles restaurant scene with a fleet of Thai restaurants, mostly catering to Western tastes. At the beginning of 2011, heir to the throne Kris Yenbamroong transformed the former Key Club office in the space adjacent to family’s established Talesai restaurant on Sunset Strip into Night+Market, a sparse, modern restaurant serving (as the neon sign advertises), Thai street food. Yenbamroong is quick to point out that Thais might be slightly put off by the term street food, as he essentially captures the essence of home cooked folksy food, using recipes gathered from his extended family and creating his own renditions of the traditional cuisine. The menu fare is primarily (but not limited to) dishes from the northern region of the country that the clan calls home. 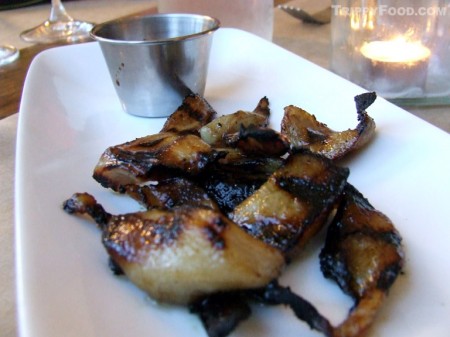 Pork figures prominently on the menu, including an unusual variety of cuts in unique, flavorful preparations, but this isn’t a case of Yenbamroong catching a free ride on the hip “nose-to-tail” bandwagon – the dishes are reproductions of cuisine that is the product of a people making do with the ingredients on hand. At the lavish menu tasting I was recently invited to sample, the first dishes out belied the restaurant’s departure from Anglicized Thai food; moist and tender skewers of condensed milk-soaked pork satay and an eggy minced chicken larb gai, although flavorful, did nothing to shatter my notions of what defines Thai food. I understand that pad thai finds a place on the menu, but bears little similarity to the Western expectation of the noodle dish.  I was still remarking how unusually flavor-packed their homemade shrimp chips (with a peppery accompanying sauce that has the look and consistency of a dark tomato paste) were when they brought out the heavy artillery. One dish that looked like chunks of grilled onion turned out to be what Yenbamroong has named “pork toro” made from the hog collar, a delicious fatty and under-appreciated cut of pork. The little piggy nibbles were slightly chewy with the texture of a firm, grilled vegetable and took their deep color and flavor from dark soy sauce. Since your typical pig has two ears, it was only fitting that there were as many dishes featuring them. The pig ear strips stir fried with chile and garlic were instantly recognizable by the white membrane sandwiched between fleshy pork, but the outrageously tender deep-fried, tempura-battered pig ear could have passed for calamari tentacles. Essentially, Yenbamroong has successfully made a sow’s ear into a silk purse. 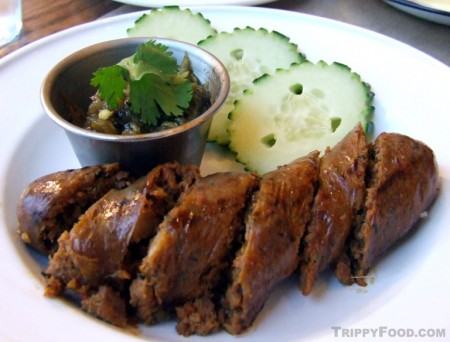 From the trailing end of the beast were equally unrecognizable pig tails. These succulent hunks of flesh are initially charred in a wok on high heat, braised and then deep fried, resulting in pork that literally melts in your mouth – there’s a good chance this dish could put Pre-Chew Charlie’s out of business. Two types of pork sausage were represented: the quail egg-sized sour sai krok isaan (earning its sour merit badge through 1 to 2 days of fermentation prior to cooking) and a northern sai uah (chiengrai herbed sausage served with noom salsa and cucumber). The sai uah had the consistency of chorizo and the fiery bite of a cobra and the sweet, sticky coconut rice was the only antidote at the table. Night+Market’s catfish tamale would look perfectly at home on a diner’s plate in a Oaxacan restaurant, wrapped lovingly in banana leaves plucked from Yenbamroong’s patio garden, but there was nothing Latino about the aroma of the fresh herbs and ground catfish that emanated from the unveiled treat. Nuoc mam chicken wings marinated in fish sauce were fried to perfection and almost tasted like seafood (a reversal of the “tastes like chicken” syndrome). 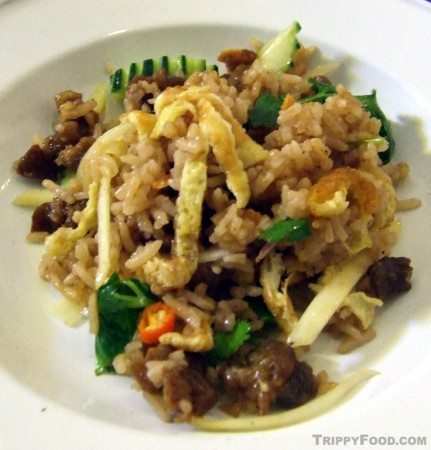 The two most formidable dishes sampled that evening were brought out last; the first was in impressive and attractive bowl of kao kluk gapi featuring rice flavored with shrimp paste and tiny dried shrimp, candied pork, shredded egg, red onion, green mango, cilantro and evil little Thai bird eye chiles. The dish arrived at in collective mounds to be mixed tableside and the wonderful aspect was that each forkful was flavored with whichever component was most prominent at the time. A bowl of kua gling (“border beef tendertail” simmered in chili paste and garnished with finely shredded kaffir lime leaves, also plucked from the garden) was the acme of incendiary cuisine – there was nothing on the table that would douse the flames of anguish spreading through my mouth – such rich, flavorful pain. 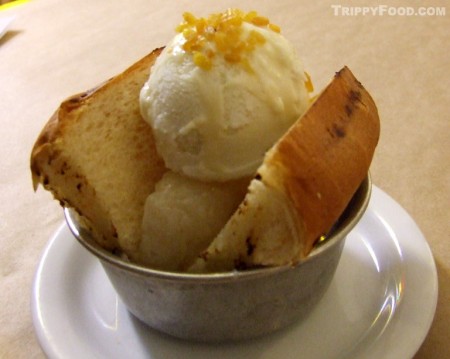 Quite literally, an ice cream sandwich

Chef Yenbamroong showed mercy on me by the promise of a cooling ice cream sandwich for desert – little did I realize how literal that statement was. The Trippy Meter pegged into the red when a dish was placed on the table containing a scoop of coconut ice cream standing on the shoulders of sweet sticky rice permeated with condensed and evaporated milk, garnished with toasted mung beans and sandwiched, yes, sandwiched between two slices of bread. Granted, the bread used was pan de leche, but it was the oddest looking translation of the name I had ever seen. True to his word, the ice cream took the edge off my 3rd-degree burnt tongue, but I have to say that it was a sweet delight. I’m not sure if it because of the ingredients, but the bread took on the characteristics of angel food cake.

Yenbamroong is enjoying a brisk business, offering a unique take on Thai cuisine in southern California, and is planning expansion to the current offerings possibly including grilling on the patio (he recently acquired three Thai sausage grills) and noodle house dishes. Whatever direction Night+Market takes, I will be waiting in eager anticipation to Thai one on.

GALLERY: See images from Val’s dinner at Night+Market at  in West Hollywood CA