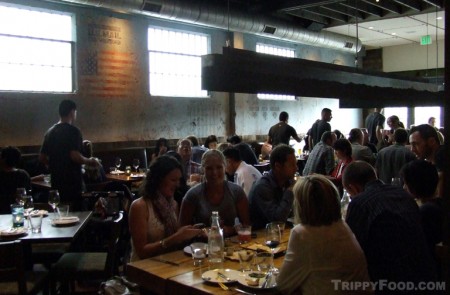 After David LeFevre announced he was leaving Water Grill in Los Angeles, there was much speculation and secrecy as to what his next venture would be. When your resume runs the gamut from dive bars in Wisconsin to Spain’s restaurant equivalent of Bill Nye (El Bulli), with gigs from pot washer up through executive chef, the vague mention of a “special project” garners more interest than Mel Gibson taking a midnight drive through Malibu trailed by TMZ.  It should come as no surprise that LeFevre helms his new restaurant in a former post office in L.A. County’s coastal community of Manhattan Beach (from which he derives the unusual moniker, MB Post).  Although the decor reeks of vintage post office decor, MB Post doesn’t play the “restaurant posing as a post office” card in the style of Concord, New Hampshire’s Margaritas Mexican Restaurant (in an old jail) or Temecula, California’s First National Bank of Mexican Food. A giant postmark is stamped on the wall in the main dining area; an antique bicycle hangs vertically near the entrance strung up with tube lamps, and there are rural residential mailboxes hanging on the wall. 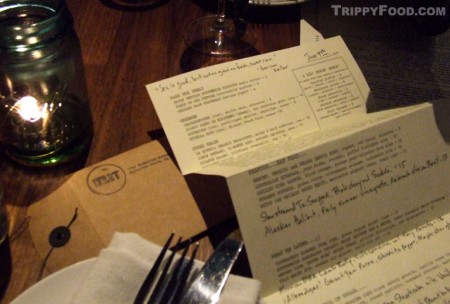 Although the wait staff doesn’t bring menus to the table in burlap sacks wearing blue shorts, they do deliver a brown envelope containing the partially “typed”, partially handwritten menu in a brown button and string envelope. Chef LeFevre’s previous stint at Water Grill might lead diners to believe that because the restaurant is a block from the Pacific Ocean that it specializes in seafood, but the menu reveals MB Post’s standing as a gastropub. Part of the reason for the handwritten portion of the menu is that items are constantly rotated. At a recent menu tasting we ordered several “must try” dishes and then left the rest up to Chef LeFevre. The first item to arrive at the table was a breadboard featuring three items – a crusty, cheese-laden bacon buttermilk biscuit with a tiny cup of maple syrup-infused butter; a fat, soft fleur de sel pretzel with nuclear horseradish mustard that makes Chinese mustard taste like whipped cream; and a thick, grilled naan. Although the pretzel was everything a soft pretzel should be and on par with one hot off a Manhattan pretzel cart, it was still a pretzel; the naan would probably not be recognizable if it were served in an Indian restaurant (it was more like a flat bread loaf) and strangely salty. The biscuits made me want to slap the Pillsbury doughboy – these crumbly mounds of buttermilk and flour kicked ass, and I had to fight the urge to order more so that I could make room for the rest of the meal. 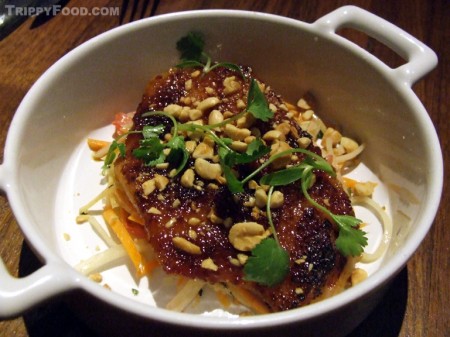 MB Post’s charcuterie showed up next featuring thin leaves of Serrano ham and slices of Casalingo cured salami still ringed with bits of white rind. Sharp wedges of Challechocker and a buttery and mildly pungent Mycella blue cheese were guarded by Mason jars of a variety of olives and vegetable pickles and served with a compartmented tray of honey, mustard and fruit spreads that looked like a condiment board game. The honey selection was astounding – waxy comb honey, earthy truffle honey and a jelly-like chestnut honey complemented the cheese, especially topped with a caper and  Spanish Marcona almonds. 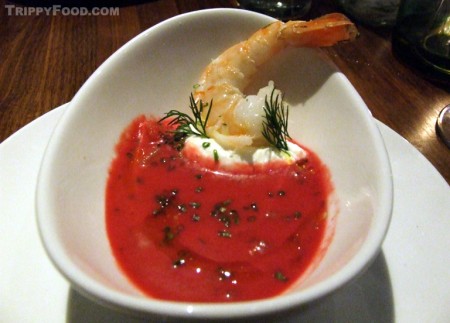 A refreshing tomato and beet gazpacho

The vegetables came out next, starting with a gazpacho made with blended tomato and beets which imparted an almost fuchsia color and a refreshing taste. A single cooked shrimp waded in the vegetable bath surrounded by a spreading pool of horseradish cream and garnished with dill, but the pleasant surprise is what was beneath the surface. Tiny, crisp cubes of celery added flavor and texture to what was probably my favorite dish of the evening. A hot bowl of lemony roasted cauliflower with a mint, pine nut and caper topping was firm yet easily chewable; although the menu identified it as yellow cauliflower, the roasting gave it more of a brown color. In the trippy category was grilled slices of nectarine, surrounded by arugula that supported a hefty dollop of whipped ricotta cheese and walnuts. I anticipated that it would be sweet and delicious after having roasted peaches at last year’s bizarreBQ, and I wasn’t disappointed. 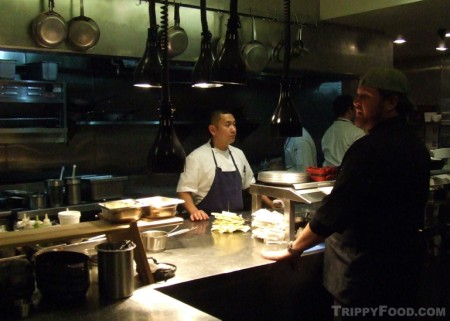 Our seafood options were done well; a southeast Asian-influenced crock of steamed mussels were flavored with a light treatment of green curry and a generous sprig of cilantro – the broth at the bottom was absorbed by the aromatic rice and taking mussel shell spoons full of the rice, broth, sweet Chinese sausage and mussels was delightful. A grilled squid came out in a bento box compartment with the pod sliced into tender rings, while the head and tentacles were battered and fried. Since our meal was slow-paced, I nursed a drink through the meal; the obvious choice in Manhattan Beach was the Manhattan Avenue. Not being much of a cocktalian I couldn’t compare it to a traditional Manhattan but it was a strange concoction rimmed with “bacon dust” and having smoky and syrup-like tequila notes (most likely from a combination of vanilla and caramel) – odd for a rye-based drink. 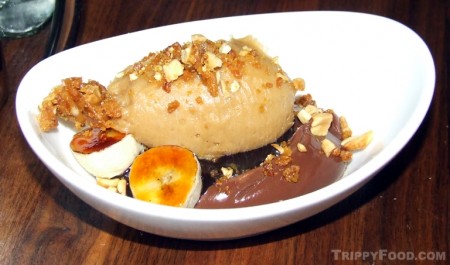 The meat was ambitious and unusual; their Moroccan lamb belly (yes, lamb belly, not pork belly) was so tender that a knife was unnecessary. The BBQ sauce was sweet but because the cut was brined for 24 hours and then braised for another 48 it was particularly salty. The caramel pork jowl was similar – sweet on top, tender and flavorful, but also a little heavy on the salt. After the meat was presented there was barely room for desert, but it was impossible to let a dessert called “The Elvis” pass. This brain-numbingly sweet mélange was a jumble of peanut butter mousse, caramelized bananas, candied bacon bits and chocolate pudding that made me suspect that The King was actually murdered by Willy Wonka. I could only muster a couple of bites, then switched to a lemon ricotta cheesecake in a Mason jar that had an odd variety of textures and a traditional strawberry lemon verbena shortcake, washing it down with a cup of Intelligentsia El Machete coffee made in a French press. 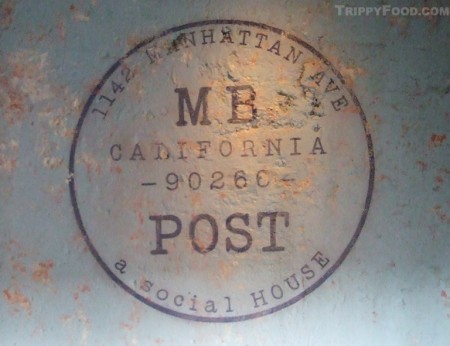 The cuisine at MB Post is innovative and at times intense, and a departure from what I had expected. The seaside gastropub is noisy and packed, but with a relaxed atmosphere – a quaint and quirky place to enjoy dinner or happy hour. P.S. – be forewarned – after your meal, the check will not be in the mail.