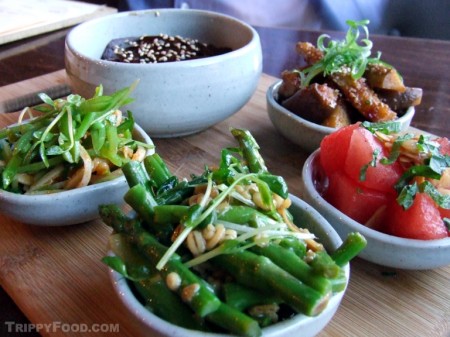 A selection of fresh banchan

Los Angeles’ Koreatown features a plethora of grill-it-yourself BBQ joints frequented by Angelenos, and while there’s something intoxicating about hearing raw animal flesh pop and crackle over a gas flame, there’s an undiscovered country of updated, modern Korean cuisine to be had in the sleek, new moko in Culver City. There’s nothing particularly nationalistic about the front bar area – no flags, karaoke, Korean Budweiser banners, just wood and stone in crisp lines and the familiar exposed wooden arched ceilings that seem to be a popular feature of the L.A. area’s gutted vintage buildings. If drinks and light fare are your thing, you can hang out at the bar and nosh on fresh and inventive banchan dishes; although moko stocks a variety of soju, on my visit I opted to try the Amore Manhattan since lately it seems to be a good comparison drink. moko’s take on the New York namesake features Old Overholt rye and maraschino liqueur, and although I found the cocktail particularly sweet, it seemed to represent vanilla more than cherry. 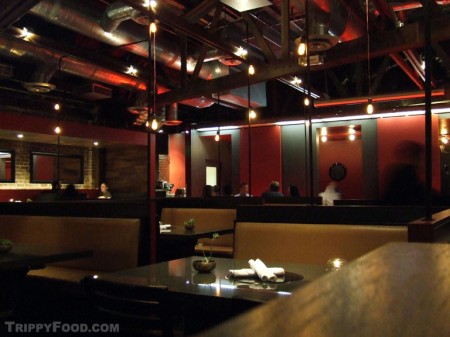 The banchan was remarkably fresh and while the menu features favorites such as kimchi, I sampled more western-influenced vegetable dishes. A baby asparagus namul has snap and a milder taste than I expected – the tiny stalks were tossed with barley, pea sprouts and what was billed as crispy garlic (which lost its crisp sitting in the pool of liquid at the bottom of the dish). The sugar snap peas were shredded into chewy aromatic strands which nicely offset the wok-seared squid and green “golden shoots”. Although flavorful, the watermelon namul with slivered toasted almonds tasted wasn’t much of a departure from eating a dish of cubed watermelon. The sautéed purple eggplant namul in green onions and sesame became spicier at I ate my way through it, but I have to say my favorite were the sweet and nutty lotus root slices. The cross-sections looked like Viewmaster slides; they imparted a strong soy taste which thankfully wasn’t as salty as expected (possibly from being “honey braised”). 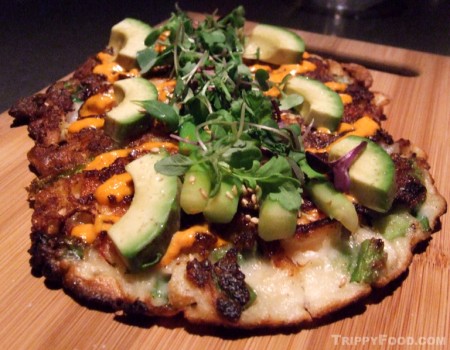 After the banchan, we retired to a table in the back in which was set a small but familiar gas grill. Although I was still nursing my Manhattan, we tried a slushy minted watermelon ice with spicy vodka and Aperol that was cool and refreshing and a good fallback plan for that pesky leftover watermelon namul.  A clear, crisp Citroën soju had the smoothness of fine tequila – the soju served is made in California in a Japanese production style, making it truly a multinational sipping drink. The soju complemented the three raw dishes served:  a garlicky tuna dressed with yuzu, soy and blood orange that dissolved on the tongue; thin filets of fluke with citrus, nori and fresh shoots; and, my personal favorite, hamachi in an orange citrus foam and garnished with tiny, diced, pickled jalapeno and crisp, toasted garlic. 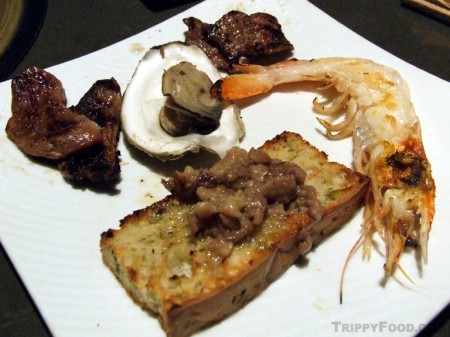 The result of my grilling skills

Two types of skewers were brought out – the first featured crispy cubes of pork belly and melty scallops with minted grapefruit, which seemed like an odd combination, but the flavors didn’t trample each other. The second was a skewer of simple, buttery chunks of the tip of the filet mignon served with a red chili pineapple ssamjang and truffle essence; julienned Asian pear was stacked alongside the skewers like a fruity game of Jenga as a steak fry tribute. Just when I thought the food cavalcade was coming to an end, a pizza-like jeon pancake was brought out featuring items from the “S” food group (shrimp, scallop and squid) and topped with asparagus, green onions, avocado and spicy greens; this could was substantial enough to be a meal in itself. Big, fat bao buns nestled a BBQ pork ssam heaped with jalapeno slices, cilantro and citrus aioli followed by a chowdery ginger egg custard with Dungeness crab, blue shrimp, shitake and scallop that had a strong, barely cooked crab aroma and taste. 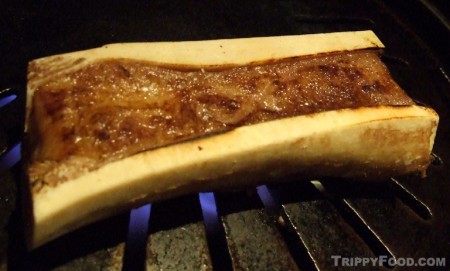 Beef marrow bone on the grill

I think I defied physics, somehow finding a way to plow through the raw items brought to the table to grill on a slab that looked eerily like some twisted alien autopsy. The platter was covered with neatly halved New Caledonian blue shrimp, live Kumamoto oysters, small strips of boned short rib, thin slices of apricot-marinated duck and a long, beef leg bone with the top section removed to reveal the marrow (which looked like a bovine canoe). Once grilled, the greasy, earthy marrow made a nice spread for the toasted sections of a green onion focaccia; we were told that that variety of shrimp had an edible shell, but it still required some chewing. The problem with the duck and short ribs was that even though they were marinated, when left on the grill too long they were almost indistinguishable. 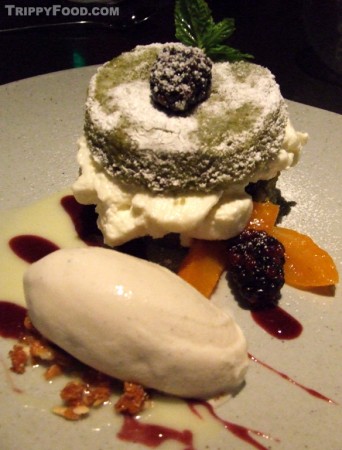 Even though I was stuffed like ssam, I still found room for dessert. I must have misinterpreted the description of one of the desserts; a creamy confection billed as parfait was topped with fresh berries and while the desert was delicious it didn’t seem very parfait-like sitting on a dish out in the open. The green tea shortcake with freshly whipped cream was astounding; not only was it packed with flavor, but the green color of the pastry knocked my socks off. Anyone dining at moko expecting a traditional Korean spread may be disappointed, but keep an open mind and I assure you that you will enjoy the updated Korean fare that moko takes into the 21st century. Although it may be a departure from what you’re familiar with I think you’ll find that moko isn’t all that loco.