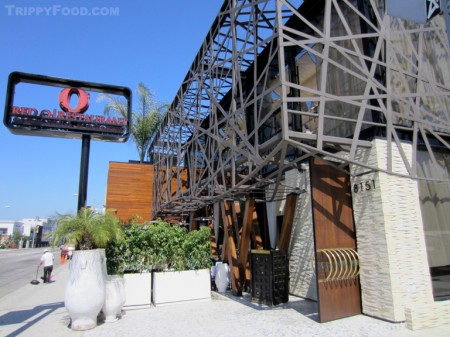 In mid-2010, celebrity chef Rick Bayless decided to expand his empire past Chicago and offer Mexican fine dining at Red O in the city just north of where they simply call Mexican food “food” – Los Angeles. Bayless is neither the owner nor chef-in-residence at Red O, but as the food consultant, the menu is uniquely his. The restaurant itself is spectacularly furnished with much of the decor and furniture hand crafted, much of it in Mexico; over the past year, the restaurant has been the hot dinner dining experience where the fortunate few had been able to sample Bayless’ adaptation of tradional Mexican dishes with a twist. Since just before Mothers’ Day of this year, Red O has been open on weekends for brunch with familiar named dishes prepared with fresh ingredients in the inovative and artistic space bathed in copious natural light. I was recently invited to try items from the brunch menu with the added benefit of having the meal coincide with a kitchen visit from the grandmaster himself. 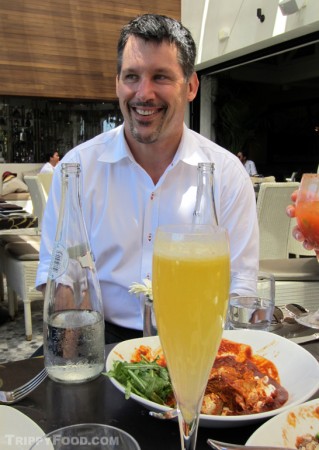 Since it was already noon, a cocktail or two or three were in order; Red O’s mixologist Steve Calabro offered me an experiment that he was concocting which he labeled watermelon agua fresca. The slightly sweet, refreshing beverage featured watermelon, basil, lemon juice, an undisclosed spirit and fresh “chocolate mint” leaves straight from Calabro’s garden (his bar is stocked with a variety of herbs grown at home). The menu featured your standard brunch libations such as the mimosa and Bloody Mary, but Red O’s entry in the latter category (enticingly called the “Roasted Bloody Mary”) sounded intriguing enough to try. Lest we forget that the menu at Red O is borne of and inspired by Rick Bayless’ years of culinary adventures in Mexico, the iced-down drink was more Michelada than Bloody Mary – in addition to vodka and tomato juice (made from roasted red and yellow tomatoes) the concoction featured Worcestershire, Tabasco, chipotle and Mexican beer with lime, olive and celery garnish. During the meal, Steve Calabro also brought out a flight of 1 2 3 Tequila (pronounced “uno, dos, tres tequila”) featuring their blanco, reposado and añejo tequilas, each with its own character. Calabro mentioned that most women prefer the reposado, a statement confirmed by the female brunch guests – his astute assessment of what drinks partons will enjoy is a result of his years bartending, starting with his unexpected promotion from bouncer at the Hard Rock Cafe back in 1987, although he modestly eschews his given title of mixologist, calling himself a “drink slinger”. 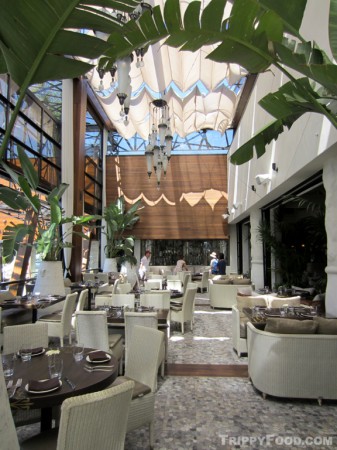 One of the members of our dining party (writer Kelly Carter) had arranged an interview with Rick Bayless which was conducted at our table while we ate. Out of journalistic respect I opted not to use much of what was discussed, but it was impossible to ignore Bayless’ mention of his crack-like addiction to Garrett’s carmel popcorn; in fact he stated that when he attends culinary events he routinely sends the hosting restaurant tins of the snack. After the interview, Bayless sat for awhile and spoke with the group and then disappeared back into the mysterious realm of Red O’s kicthen.  The dishes we ordered were straight off the menu, although in consideration for two of our party’s vegetarian sensibilities, several of the plates were prepared with egg whites and without meat. Some of the items brought out were not drastic culinary departures, but fresh and well presented – a guacamole bridge arched over a pool of tortilla chips, with the guac strategically placed on a banana leaf carpet and garnished with radishes; at the end of the meal churros were brought out swaddled in a cloth napkin and accompanied by a shallow dish of chocolate dipping sauce – they were crispy, perfectly sweetened and seasoned, but let’s face facts – they were still churros. 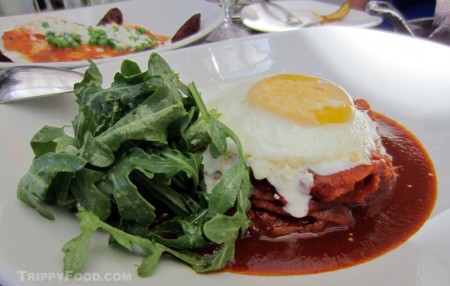 The breakfast dishes were substantial and artistically presented as our server brought out a holy trinity of new takes on tradional favorites: Huevos a la Mexicana (featuring the aforementioned egg whites and the addition of grilled shrimp); chilaquiles al Guajillo that looked more like a breakfast Mexican lasagne than the familiar melange of tortilla and eggs; and huevos Montulenos sans pork and again with egg whites. Of the three dishes, I favored the chilaquiles for the texture and warm, mild spiciness and the richness of the golden yolk cascading over the dish after being released from its fried egg perch atop the mound. The huevous Montulenos tasted a little lean with just the egg whites, but the fried plantain pontoons the tostada was mounted on added an unusual sweetness that made up for the absence of egginess and the vegetation and tender grilled shrimp on the huevos a la Mexicana gave it a fresh and wholesome taste. 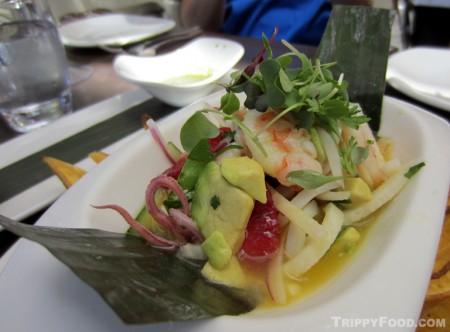 A tangy dish featuring steamed shrimp and squid treated with orange and mixed with cucumber, jicama, avocado, strawberries and cilantro was outstanding; this and a scoop of fresh dungeness crab dressed with tomatillo, avocado, grilled pineapple and onion salsa were served over long strips of crunchy fried plantains. The plates weren’t enormous but it was substantial enough to satisfy the five of us dining. Dessert was still in order, which mercifully arrived in bite sized portions – this included the aforementioned churros and a sweet, melty goat cheese cheesecake bite with a green root beer-based sauce and topped with what suspiciously looked like Garrett’s carmel popcorn. Accompanying the dessert was Chef Bayless who presented us with the product of his latest collaboration with Milk and Honey – a pouch of Mexican granola. Granola hardly seems like a Mexican dish, but Bayless states that he noticed that at Mexican resorts the locals were producing a granola featuring toasted kernels of amaranth that is typically served with yogurt and he decided to recreate it for American consumption; the granola is slated top be carried at Whole Foods in the near future. I fought the urge to tear open the bag at the table, but have since tried it and prefer it to the gritty, over-sweetened boxed variety that I formerly considered “high-end”. 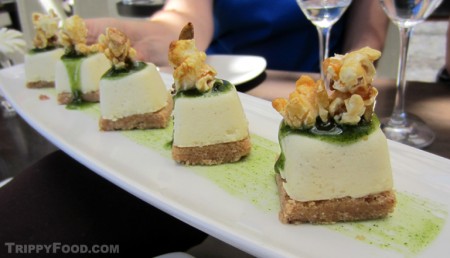 The brunch offerings at Red O reflect Bayless’ research (he routinely takes the entire staff from his Chicago ventures on exploratory trips throughout Mexico) and love of Mexican cuisine; although some purists may scoff at his innovative and flavorful takes on Mexican food, there’s no denying the quality and sensory enjoyment  of the fare which stands on its own. Bayless and the owners and staff of Red O have vindicated Hester Prynne by bringing prestige and respect to their own scarlet letter.

1 Response to The Scarlet Letter